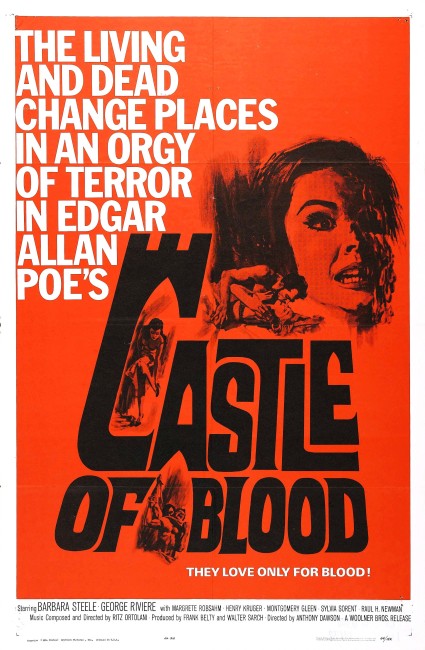 aka The Castle of Terror; The Long Night of Terror

Alan Foster, a journalist with The Times, tracks down Edgar Allan Poe for an interview during his visit to London. Foster is dismissive of Poe’s claims that his stories are based on fact. The man that Poe is talking to, Lord Thomas Blackwood, speaks up and offers Foster a bet – a hundred pounds if he can spend the night in the Blackwood castle at Providence Hill on this night, the night of the dead, something that no other person to take the bet has survived. Foster accepts and is taken to the castle. Inside, he meets Blackwood’s sister Elisabeth and the two fall into one another’s arms. She then announces that she is dead. Foster is next witnesses as a man bursts in and stabs her in the bed. Passing through the castle, Foster sees the ghosts that inhabit the castle play out the contorted jealousies of the past that existed between Elisabeth, the stable boy she dallied with, her husband and the Lady Julia who also desired Elisabeth. Foster seeks to escape before dawn, taking Elisabeth with him, lest the ghosts claim him.

With the international success of Mario Bava’s Black Sunday (1960) primarily (although there were other films before it), Italian cinema found itself in the midst of a vogue for Gothic cinema. Over the next few years, a number of other directors popped up exploiting Bava’s extravagantly fantastical style. This fad also gave Black Sunday‘s star, British actress Barbara Steele, a career and resulting cult fame. Plots frequently centred around gloomy dark castles, hauntings and supernatural retribution plots, with the haunted otherworldly looks of Barbara Steele at the centre of the show.

Antonio Margheriti was one of the hacks of the Italian exploitation industry. He touched on numerous genres within his career that ranged between the 1960s and his death in 2002, ranging from action films to the Italian space opera, the giallo film, peplum and several cheap spaghetti Westerns. Throughout most of his films, he was credited as Anthony [M.] Dawson, as per the trend of the era for Italian filmmakers taking English-sounding names to sell the films in the US. A good percentage of Margheriti’s output was unadulterated hackwork but Castle of Blood/The Castle of Terror – which should not be confused with Margheriti’s earlier Gothic The Virgin of Nuremberg (1963), which was also retitled The Castle of Terror – is one occasion upon which Margheriti achieved far more than that.

Margheriti’s opening of the film has an incredible atmosphere that is a near-perfect evocation of the Italian Gothic. The entry into the castle comes with much in the way of lurking black cats, cobwebbed halls and dust-covered living rooms, candles mysteriously blown out, the pendulum on a clock that starts moving one minute and is stilled the next, or mysterious scenes where Georges Riviere sees a man and woman dancing to music in a room but the room is empty when he opens the door. The later venture down into the crypt to find Barbara Steele’s corpse, which is mummified but still breathing, is a masterpiece of production design. The black-and-white atmosphere looks superb in the beautifully crisp dvd rendering.

There is also a cameo appearance from Edgar Allan Poe who narrates a fearfully told tale as the film opens – the Roger Corman adaptations of Poe’s stories beginning with The House of Usher (1960) were the source of inspiration for much of the Italian Gothic (while this also makes the completely fictitious claim to being partly based on a Poe story).

Not long in, there is the introduction of Barbara Steele as the sister. The film gets undeniable effect out of casting Steele as what at the outset seems to be an ordinary girl in need of rescuing. Steele plays the part with a nervous emotional fragility. Added to her natural wide-eyed looks, this gives her the appearance more of a cliche mad woman than a standard Gothic heroine. After she beds hero Georges Riviere and he rests his head on her chest, she lies back and calmly announces with chill regard: “My heart doesn’t beat – it hasn’t for ten years. I’m dead.” This is followed by the abrupt shot where the bare-chested Phil Karson/Giovanni Cianfriglia bursts in and stabs her as she lies in bed.

Much of the rest of the film centres around Georges Riviere as witness while the original events are played out by the ghosts and his attempts to escape the fate that is intended for him and take Barbara Steele away. Castle of Blood is unusual for films of this period in featuring a complicated web of desires among the murdered parties, all of whom seem to want Barbara Steele, one of which is a woman with lesbian desires. This latter is a theme that was ahead of its time and is something that would not enter the horror genre for another few years with Hammer’s Karnstein adaptations and sundry lesbian vampire films.

Antonio Margheriti remade Castle of Blood a few years later in colour as Web of the Spider (1971) starring Anthony Franciosca as the hero and with Klaus Kinski as Edgar Allan Poe.