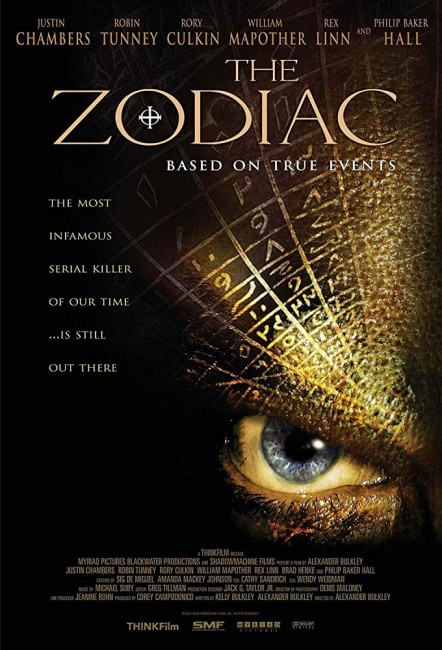 Beginning in December of 1968, a mystery killer strikes in Vallejo, California, shooting couples parked in their cars. The killer then calls the police with clues that prove that he did it. Detective Matt Parish is assigned to the case. As subsequent killings occur and pressure mounts to solve the case, Matt is baffled by the lack of leads. Soon the killer begins to send taunting letters to the media, signing himself The Zodiac, and leaving a series of cryptic puzzle that he demands be published in local newspapers.

The Zodiac, which should not be confused with David Fincher’s more high-profile treatment of the same true story Zodiac (2007), is based on the Zodiac Killer case that rocked the Northern California region between 1968 and 1969. A mysterious killer shot and occasionally stabbed seven people, usually couples in remote areas. Two of the victims survived. What is most famous about the Zodiac case is not so much the killings as the media circus that followed where The Zodiac sent dozens of letters to various newspapers, usually written in a cryptic cypher, which taunted the authorities, made claims to other crimes and gave clues to prove that he conducted the killings. (The exact number of the Zodiac letters is not known, as there have been many fakes). The Zodiac case remains unsolved to this day – although a number of people have been nominated as suspects, nothing has ever been conclusively proven.

The Zodiac comes from director Alexander Bulkley, who had previously only made the short film Suspects in the Murder of Miss May (1999). Subsequent to The Zodiac, Bulkley has worked as a producer on quirky independent animated shows like Moral Orel (2005-8), Robot Chicken (2005– ), Titan Maximum (2009) and Bojack Horseman (2014-20).

It is not known if Alexander Bulkley put The Zodiac together quickly in an effort to steal the lead on David Fincher’s more high profile production, which had been announced for several years. (The two films ever share cast members in the person of Philip Baker Hall). At best, The Zodiac acts as a primer for revision of the basic facts of the case in anticipation of Fincher’s Zodiac. You certainly have to complement Alexander Bulkley and his brother Kelly for having researched the Zodiac case and in replicating the details and crime scenes with a degree of detail that approaches David Fincher’s obsessive fanaticism. We even see The Zodiac in a theatre watching The Most Dangerous Game (1932) at one point.

The main problem with the film is trying to make The Zodiac case into a narrative. As is more evident in the David Fincher film, the case was spread out over several law enforcement jurisdictions, meaning that there is no investigator who stays throughout the story. While Fincher took the viewpoint of cartoonist Robert Graysmith who later conducted his own amateur investigation and wrote two books about the case, Alexander Bulkley takes the point-of-view of one of the Vallejo County detectives. However, Bulkley is at a loss to turn this into much in the way of interesting drama. Justin Chambers’ detective briefly follows a suspect but this peters out into a false lead. We also get the impression that his son (Rory Culkin) is on the verge of breaking the Zodiac’s cypher but Bulkley then goes with the historical account of what happened and we are left wondering why the film spends time following Culkin around when this subplot leads nowhere.

The major problem with The Zodiac is that, while Alexander Bulkley has done an admirable case of replicating the detail of the Zodiac case, he does so too well to make an interesting film. The film fades out after the shooting of taxi driver Paul Stine at San Francisco’s Presidio Heights and on the final image of police cars following school buses after The Zodiac’s threat to shoot one of them.

Unlike Fincher, Bulkley keeps to the canonical victims and does not elaborate into any speculated victims. Nor does he follow up the trails of letters and games with the media that The Zodiac played for several years after that. Unlike Fincher, Bulkley does not seek to provide a solution to the case or name a suspect. The upshot of this, at least in terms of a thriller, is a film that sets up a mystery but leaves it with no solution, answer or even speculation as to who was behind it.

Alexander Bulkley also shoots the film in the dullest way possible. Even though The Zodiac did attain a sporadic cinematic release, everything takes place as though it were a tv movie shot with a bland disaffect. Bulkley gets particularly silly when he comes to his jumpcuts – like the scene where The Zodiac is watching The Most Dangerous Game and he keeps flickering back and forth between the film on the screen and the couple opposite. This goes into overdrive at one point when Bulkley conducts a frenetic montage of iconic images of the televised news stories of the era. Exactly why is unsure, but the upshot is pretentiously silly.