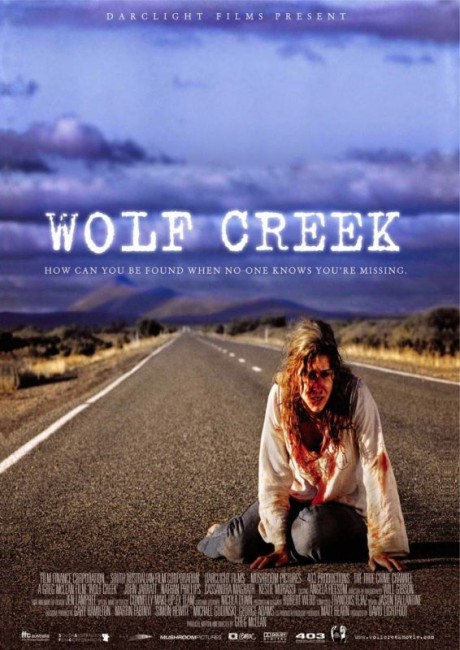 Two English backpackers, Liz and Kristy, and an Australian guy, Ben, buy a second-hand car and set out on a trip driving across the highways of the Australian Outback between Sydney and Darwin. During the journey, they stop off to view the Wolf Creek meteor crater. Afterwards, they find that the car’s engine is dead. As they wonder what to do, Mick Taylor drives by and offers to tow them to his place and give them a replacement engine part. They settle down for the night at the disused mine where Mick lives. However, Liz comes around to find herself tied up and frees herself to discover Mick torturing Kristy. The two of them try to make an escape as they are hunted by Mick.

Wolf Creek was a low budget independently made Australian film from novice director Greg McLean. Wolf Creek was picked up at that year’s Sundance Film Festival and led to a highly successful worldwide release.

Wolf Creek gained a degree of notoriety due to its claiming to be based on true events. Although, when examined this is a somewhat dubious claim. The film is loosely based on several Australian cases – notably that of Ivan Milat who was convicted of the so-called Backpacker Murders wherein he brutalized and killed seven different hitchhikers in the Belanglo State Forest in New South Wales between 1989 and 1994. Milat made a habit of stabbing into victims’ spines and paralysing them, which Wolf Creek readily borrows.

In particular, the film draws itself from the case of Bradley John Murdoch who in 2005 was convicted to 28 years for the murder of British backpacker Peter Falconio at Barrow Creek in the Northern Territories in 2001. Murdoch waved down the car of Falconio and his girlfriend Joanna Lees where he shot Falconio and brutalized Lees. Falconio’s body was never found, although Lees escaped and later identified Murdoch, who was condemned along with other crucial (albeit disputed) pieces of evidence. The Falconio murder trial loomed even further over Wolf Creek when it was released and a court order banned the film in Australia’s Northern Territories so as not to influence the outcome of the trial. It should also be noted that, though claiming extensively to be based on a true story, Wolf Creek varies widely from the Murdoch-Falconio case – in real life it was the woman who survived, not the guy; while the film moves the location of the murders from the Northern Territories to Wolf Creek (in actuality spelt Wolfe Creek) National Park in the state of Western Australia (which are in reality separated by some 2000 miles distance).

Wolf Creek also buys into many of the caricatures of the Texas Chain Saw, Straw Dogs (1971) and Deliverance (1972) Backwoods Brutality cycle, as well as the one Australian venture into the genre with the non-horror Wake in Fright (1971) – the overriding sense in these films that city slickers have passed beyond a point where the rules of civilisation no longer exist and the land there is dominated by hicks and psychopaths who outrightly jeer at their city ways, or much worse. Wolf Creek even has the same plot structure as The Texas Chain Saw Massacre, including the extended build-up before the travellers are tortured and the detailed escape and pursuit of one of the girls. Wolf Creek also came out the same year – and has many similarities to – Hostel (2005), which was also about a trio of backpackers who unwittingly stray into a remote area of the world where they are imprisoned and become sadistic torture playthings. Wolf Creek and Hostel even have a near-identical scene where one of the main protagonists gets their fingers severed.

Wolf Creek received a good deal of criticism during its premiere in the US, of being called repellent, nasty and irredeemable. Roger Ebert confessed to “wanting to walk out of the theatre and keep on walking”. Wolf Creek came out the same time as a number of other films – Auditon (1999), Oldboy (2003), Saw (2004), The Devil’s Rejects (2005) and Hostel – were determined to push an envelope in terms of on-screen sadism, something that became nicknamed the Torture Porn fad. Wolf Creek is harrowing, although I must say that in terms of some of these others – the gruelling suspense of Saw, the intensely uncomfortable climax of Audition, the nasty extremes of Hostel, the morally inverted mean-spiritedness of Rob Zombie’s films, or the sublime weirdness of The Ordeal (2004) – it seems a little tame. It is all relative of course – Wolf Creek, had it come at any other period, might have been seen as one of the better Texas Chain Saw imitators, but surrounded by these others seems somewhat restrained. Certainly, the scene where John Jarratt snips off Cassandra Magrath’s fingers and then impales a knife in her spine calling her “a head on a stick,” and some of the torture scenes go some brutal way towards these other films. Greg McLean’s rawness – both in the entirely naturalistic handheld photography and during the brutality of the climactic chase scenes – is commendable.

On another level, Wolf Creek seems to be a film about the mythology of Australian cinema. Greg McLean throws in a number of direct cinematic quotes – like the scene where John Jarratt revs his car to come after the escaping Kestie Morassi, where he deliberately styles the shots of Jarratt ominously waiting in his car after the introduction of Mel Gibson waiting in his high-power Interceptor in the opening scene of Mad Max (1979). The most noticeable of the quotes is from Crocodile Dundee (1986) – the “That’s not a knife – this is a knife” speech – which is later turned into something nasty. While John Jarratt’s playing tends towards broad caricature at times, you can see that his bushman character has been intended as a dark inversion of Crocodile Dundee, where the film turns the Paul Hogan’s persona on its head and reveals it as a dangerous psychopath.

Australian cinema also has a fascination with the wide-open emptiness of The Outback (the desert area that comprises some 70% of the country). In Australian cinema, The Outback is variously seen as lurking with psychopaths – as in Roadgames (1981), Razorback (1984) and Kiss or Kill (1997) – or the mysterious and unexplained – as in The Picnic at Hanging Rock (1975), Incident at Raven’s Gate (1988), In the Winter Dark (1999) and Undead (2003). Greg McLean taps into both of these aspects. Aside from the lurking psychopath, he also constantly edges towards the mystical and unexplained. People discuss stories about mysterious UFO appearances or entire towns that became lost during storms. McLean has also chosen the very mysterious location of the real life Wolfe Creek meteor crater that seemingly has the ability to cause watches and vehicle engines to inexplicably stop (which suggests something of the looming geological mystery of Hanging Rock in The Picnic at Hanging Rock).

The Falconio-Lees murder/trial was later dramatised with a far more accurate accounting of the facts in the Australian tv movie Murder in the Outback (2007).

(Nominee for Best Actor (John Jarratt) at this site’s Best of 2005 Awards).