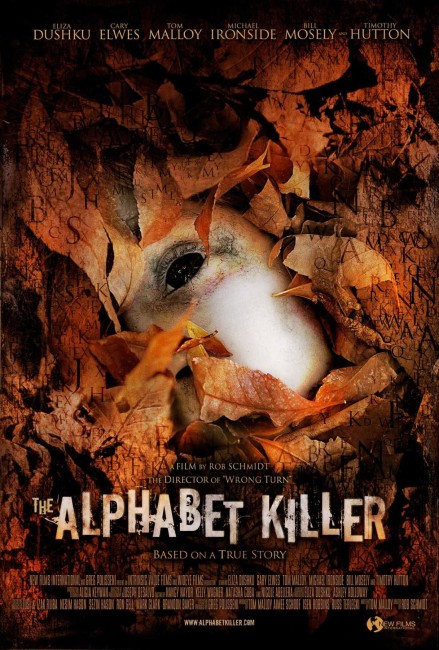 In Rochester, New York, detective Megan Paige is assigned to the case of young girl Carla Castillo whose body is found dumped in the neighbouring town of Churchville after she has been sexually violated and murdered. This is the second in what is termed the Alphabet Killings where the victims are girls whose first and last names and the town the bodies have been dumped in all start with the same letter. Megan becomes obsessed with solving the case to the point that she starts imagining seeing the dead girls. She has to be hospitalised and is diagnosed with schizophrenia. Two years later, she is recovering and has returned to work in the department’s clerical division. There is then another Alphabet Killing with Wendy Walsh being killed in identical manner and dumped in the town of Webster. Megan’s ex, now the captain, brings her back onto the case in an advisory role. However, as Megan goes out on a limb and becomes more embroiled in trying to find the killer, the visions of the dead girls reappear and her mental health begins to fray.

The Alphabet Killer is based on the case of the Alphabet Murders that took place between 1971 and 1973 around Rochester, New York. The victims were three young girls aged between ten and eleven. Each had a first and last name that started with the same letter – Carmen Colon, Wanda Walkowicz and Michelle Maenza – and were found after having been raped, strangled and their bodies dumped in a neighbouring town that started with the same letters – respectively Churchville, Webster and Macedon. Though the police investigated extensively, no suspect was ever caught, although one interesting name that did emerge was Kenneth Bianchi, one of the Hillside Stranglers, who was living in the area at the time.

The Alphabet Killer is a film very loosely based on the Alphabet Killer case. It keeps some of the essentials of the case – it is filmed in the Rochester, New York area and although the names of the victims are changed, each of the girls shown in the film has the same initials and is dumped in the same town as the original victims. However, resemblances end about there.

The most noticeable difference is that the original Alphabet Murders took place in the early 1970s, while the film is clearly set in the present-day – with contemporary vehicles, clothing styles and modern Windows XP computer systems. It seems hard to buy into the credibility of a film claiming to be based on a true story when there is nearly forty years difference between the original events and what it is claiming is a true story. The film also postulates the discovery of the killer’s identity, even though such was never made during the time of the original investigation – although the story twists the ending so that the killer gets away without being apprehended and in the fadeout is seen eyeing a new girl.

One suspects the reason for The Alphabet Killer‘s making was that the people behind it were seeking to jump aboard the success of David Fincher’s Zodiac (2007), another film that sets out to investigate and offer a solution to an unsolved murder case from the 1970s. Unlike Fincher’s painstaking work of investigation, The Alphabet Killer, despite initially setting up a passable police procedural, only jumps at cliche answers. Unlike Zodiac, it never engages as a thriller where we see Eliza Dushku or any of the others trying to piece the mystery together. It only remains at the cliche level of a police investigation, almost all of which is fiction.

Perhaps the worst part about the film is the depiction of Eliza Dushku’s mental breakdown. Eliza Dushku is an intelligent actress and brings to bear here the intent, driven seriousness she does elsewhere. The problem with The Alphabet Killer is that neither she nor anybody involved in the writing and directing seems to have any clear conception of what mental illness is. For the film, this is simply something where Eliza Dushku acts obsessed and Rob Schmidt throwing in cliche visions of the dead girls surrounding her. Her behaviour exists in a vacuum with no depiction of the mental processes involved – we never know why she has become so obsessed with the case to the point that it has led to a breakdown or whether it is due to a history of mental illness. Moreover, this is something that detracts from the story. We have what initially seems to be a police procedural that is loosely based on a true-life unsolved crime but instead the bulk of the film gets taken over by Eliza Dushku acting obsessed and having hallucinations. That is not a true-crime film; it is Shine (1996) posing at being a detective story.

[PLOT SPOILERS] The eventual revelation of the identity of the killer takes the film from a quasi-credible thriller into cliched B movie thriller plotting. Here we find that the killer was none other than Timothy Hutton, Eliza Dushku’s sponsor in her mental health support group. With vast credibility-stretching coincidence, she, the lead investigator in the Alphabet Killer case, has a breakdown and just happens to meet up with the killer in a mental health support group where he is appointed her sponsor. He then decides to start up the killings again after she recovers so as to “better connect with her”. Not to mention how with equal preposterousness, we find that all along he has been faking an entire lifestyle as someone in a wheelchair.

Director Rob Schmidt had previously made the thriller Crime and Punishment in Suburbia (2000) and entered the horror genre with the Backwoods Brutality film Wrong Turn (2003) and subsequently made The Boarder (2018) about a psychopathic tenant.