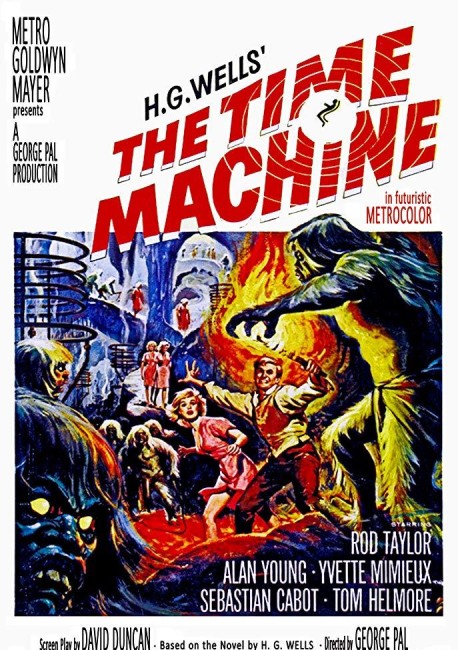 At a dinner party on New Year’s Eve of 1899, George, a Victorian inventor, unveils his plans for a time machine to his dinner guests and astounds them by displaying a miniature working model. That evening George embarks on his maiden journey in the life-size version. Marvelling at seeing time speeded up, he passes through World Wars 1, 2 and 3 and eventually arrives in the year 802,701. There he meets the descendants that humanity has turned into – the gentle, lotus-eating Eloi. Among the Eloi, he falls for the lovely Weena. He then becomes embroiled in a fight to save the Eloi from the brutal, cannibalistic, underground-dwelling Morlocks.

The Time Machine was one of the finest films to emerge from George Pal. Pal was the single most important contributor to science-fiction in the 1950s, having produced such films as Destination Moon (1950), When Worlds Collide (1951) and The War of the Worlds (1953). (See below for George Pal’s other genre productions). The success of the adaptations of Jules Verne’s 20,000 Leagues Under the Sea (1954) and Around the World in 80 Days (1956) had produced an interest in period science-fiction. After a number of Verne adaptations, filmmakers started to turn to Verne’s contemporary H.G. Wells as a source.

H.G. Wells’ The Time Machine (1895) is a science-fiction classic. It essentially popularised the concept of time travel and certainly of the time machine. H.G. Wells was a socialist with considerable opinions about the way society should be – in later life, social crusading took over completely from his fiction writing.

In The Time Machine, Wells’s vision of humanity’s future was a satirical vision of the British class conflict. The Eloi are much more savagely condemned in the book than they are here in the film – Wells saw the Eloi as the upper-classes, dulled by creature comforts, while the underground-dwelling Morlocks were a stand-in for the Victorian mill workers. In an element that is missing from the film, Wells saw the relationship between the two as co-dependant and exploitative – the Morlocks provided everything for the Eloi while the Eloi in return allowed themselves to be devoured. In the film, the Eloi are merely an innocent race that needs to be delivered from oppressive thrall by an outsider.

Now the story is not too different from 1950s science-fiction films such as Captive Women (1952), World Without End (1956), Beyond the Time Barrier (1960) and The Time Travelers (1964) where usually an astronaut or test pilot travels into the future and does two-fisted combat with the mutants and saves a remaining human girl. Gone altogether also is H.G. Wells’s climactic scenes where the time traveller travels into the far-flung future and sees humanity evolved into crustaceans and the end of the world.

Elsewhere though, The Time Machine remains a singular delight. Like 20000 Leagues et al, George Pal keeps the book to the period when it was written. Much charm is wrought from the beautiful production design and quaint Victorian attitude to science. The writing in these scenes is whimsical, especially the touching sequence where Philby tries to persuade George against using the device. The future scenes do descend to pedestrian adventure.

However, the time travel sequences – where we see Rod Taylor accelerating the machine and everything around him speeding up, the passage of time being measured by candles melting and plants blossoming in seconds, the flickering of day and night overhead and the changing of fashions in the shop window opposite – hold a sense of wondrousness that is quite magical.

Right up until his death in 1980, George Pal had always planned a sequel to The Time Machine. One script that circulated incorporated H.G. Wells’s climactic ideas of the far future and the doom of humanity. Many writers have used the H.G. Wells novel as a basis for sequels and alternate histories.

The Time Machine was remade badly as a tv movie The Time Machine (1978), which modernises the story but is otherwise closely reliant on this version. The Time Machine (2002) was a lavish big-budget remake, which had the novelty of being directed by the grandson of H.G. Wells. The time machine turns up in Gremlins (1984) and The Lego Movie 2 (2019) and is made the focus of an entire episode of The Big Bang Theory (2007-19), while its design was homaged in the Japanese Summer Time Machine Blues (2005) and it appears iin woking order at the end of The Librarian: Quest for the Spear (2004).

There is an appealing throwaway gag in the film – if one looks closely they can see that the plaque on the time machine shows that George’s real name is ‘H. George Wells’. The appeal of H.G. Wells himself as time-traveller is a recurrent one, having also been done in the film Time After Time (1979) and episodes of Doctor Who (1963-89) and Lois and Clark: The New Adventures of Superman (1993-7), even Warehouse 13 (2009-14), which featured a Helena G. Wells.

David Duncan was also a regular genre writer with the screenplays for the English-language version of Rodan the Flying Monster (1956) and the original screenplays for The Black Scorpion (1957), The Monster That Challenged the World (1957), Monster on the Campus (1958), The Thing That Couldn’t Die (1958), The Leech Woman (1960) and Fantastic Voyage (1966).