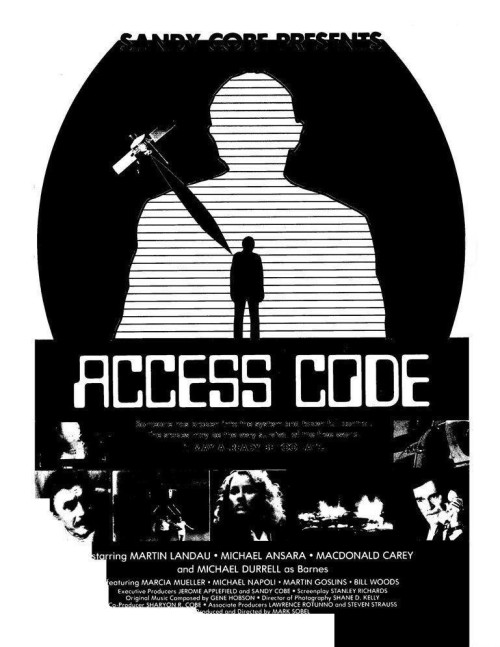 Chaos ensues when a foreign intruder enters the government computer system and actives the codes to trigger a nuclear war, stopping only moments before the launch goes ahead. The agency tracks down former employee, programmer Michael Barnes, to ask his help. As Barnes investigates, he uncovers the existence of a satellite capable of photographing a man’s face from orbit and turning tv sets into spy cameras. He then discovers the plans of a covert international conspiracy to use the satellite to control the population.

Access Code is an obscure political paranoia thriller from the early days of direct-to-video release. It has intermittent moments of genre interest. It was almost certainly, at least in its initial set-up, inspired by the highly successful hacker film WarGames (1983) the previous year.

The opening few minutes of the film create an atmosphere of shadowy paranoia as programmer Michael Durrell’s tv set sits watching him as he sleeps, mockingly playing back to him details of the last two years of his life. These scenes create a spooky sense of dis-ease – unfortunately, they are something that slips by the rest of the film.

Hammering home a paranoia of such magnitude is beyond the film’s conceptual scope – the rest of the film dissolves into uninvolving cliches and moments that frankly defy credibility – like the ease with which characters walk into high security areas – while the central menace seems too large and inadequately conveyed to amount to much more than the odd threatening gesture. Moreover, the idea is something that clearly eludes the budget the filmmakers have at hand – the budget is so slender that something like the destruction of a phone-box is only shown by the reversal of the negative.

The cast are a singularly uninteresting assembly who leave the plot plodding towards its dogged end on autopilot safely devoid of any human contact. Martin Landau and Michael Ansara are brought in in small parts for name recognition value.