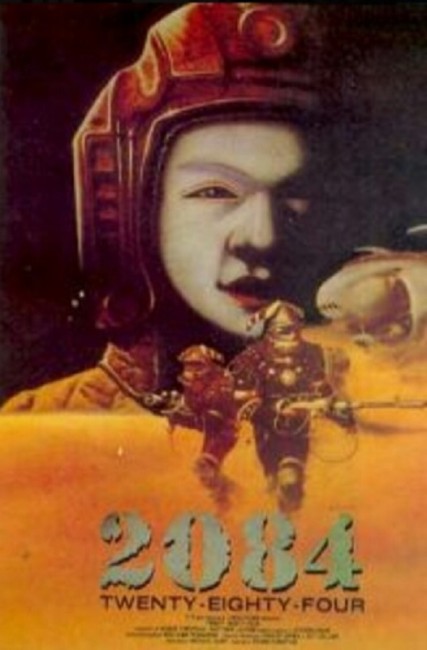 The 21st Century at the mining colony on the planet Ordessa. Lorca and his sister Abbie are forced to flee as the droids of the planetary governor Captain Jowitt crack down on the rebels. Lorca heads into the desert pursued by the mercenary Danny. Abbie meanwhile uses the android teacher Grid to break into the computer mainframe. There they find a communique informing Jowitt that the ship Boston Queen is arriving with a cargo of androids to replace the human workers and of Jowitt’s plans to kill the workers on the return flight. Hunted by Jowitt’s droids, Lorca and Abbie try to get to their father’s ship Redwing and make an escape offworld.

Starship is a film I have waited over 35 years to watch. I first read about it in an issue of Starburst magazine in the mid-1980s where it was known variously under the titles Lorca and the Outlaws and 2084. The production artwork made it look extremely exciting. I waited and waited for it but it never seemed to come out. Even after I learned that it had been retitled Starship, I was still unable to find a copy. It wasn’t until the 2010s that I eventually found a site that had uploaded versions of old VHS copies that I was finally able to get a copy of the film.

Starship was made by Roger Christian. Christian had previously been a set dresser, graduating to art director with such notable credits as Star Wars (1977), Alien (1979) and Monty Python’s The Life of Brian (1979). Christian made his directorial debut with the amazing psychic powers film The Sender (1982), which left me with the impression he had great promise. At the time he made Starship, Christian only had this single directorial credit. After the non-appearance of Starship, he struggled for years and his next directorial credit was not for another decade until Nostradamus (1994), followed by the notorious Battlefield Earth: A Saga of the Year 3000 (2000), which has unfortunately cast a pall over Christian’s career. He has subsequently made the little seen likes of American Daylight (2004), Bandido (2004) and Joseph and Mary (2016), before returning to genre material with Prisoners of the Sun (2013) and Stranded (2013).

Starship was made in the aftermath of Star Wars – indeed, it is likely a good part of the reason Roger Christian got to make the film may well have been because of his credit as the set decorator on Star Wars. There were a number of space opera copycats for several years after Star Wars came out, although Starship falls more into the category of a planetary adventure – an intergalactic science-fiction adventure but where the adventuring is contained to a single planetary locale. There were several other films in the post-Star Wars era that took this route – see Metalstorm: The Destruction of Jared-Syn (1983) and Spacehunter: Adventures in the Forbidden Zone (1983). (See Space Opera Films and Planetary Adventure Films).

The film starts with passable promise. There are some decent model effects that at times give the feel they could have been modelled straight from the illustrations of Chris Foss. There is some reasonable imagination gone into the costuming of the security androids and of dwarf actor Deep Roy as the companion android Grid (listed as Kid on the credits). On the other hand, it soon becomes painfully evident that the film was made with nowhere near enough budget. The film was shot on location in Australia and it is more than evident that they have cut costs by simply using contemporary pick-up trucks and giant mining Caterpillars to stand in for futuristic vehicles.

It is hard to say what a disappointment Starship ends being after finally getting around to watching it. Certainly, my distant memories of it from Starburst had built it up into something much more interesting in my imagination. The plot is dull – merely rebels against a totalitarian planetary government that employs stormtrooper-ish police androids outfitted in black. It is dully directed and badly in need of an editor – even then any editor would have had difficulty finding anything exciting out of the lengthy padding. Moreover, the score kills off the film’s one major action scene with John Tarrant fighting around the outside of a giant Caterpillar truck.

None of this really extends to a full script – just lots of running around and occasional shooting. Even the climax the film builds up to seems off – it is all built up around the brother and sister reactivating their father’s spaceship and making an escape rather than doing anything to actually stop the evil governor and his efforts to kill the human populace.

The film looks badly dated watching it today. Everyone has 80s hair and still play arcade videogames. The computer graphics are limited 2D line drawings, something that looked obsolete even a decade after the film was made. The visit to a nightclub comes with guest appearances from 80s singer Toyah Wilcox and Peter Gabriel. There’s a particularly amusing scene where Donogh Rees and Deep Roy’s android break into the station’s computer banks to intercept a message. Here rather than hack into a computer to find an email they have to physically break into a room to access the electronic circuits of the mainframe.

What almost entirely kills the film is its being lumbered with a ratty synthesizer score. The credits note that the score is by “Tony Banks of Genesis” – not merely the name of the artist but also noting his association with a famous band. Unfortunately, Banks’ works with Genesis was unable to translate to film and the score pounds out with complete lack of subtlety through most scenes and kills any of drama in them.