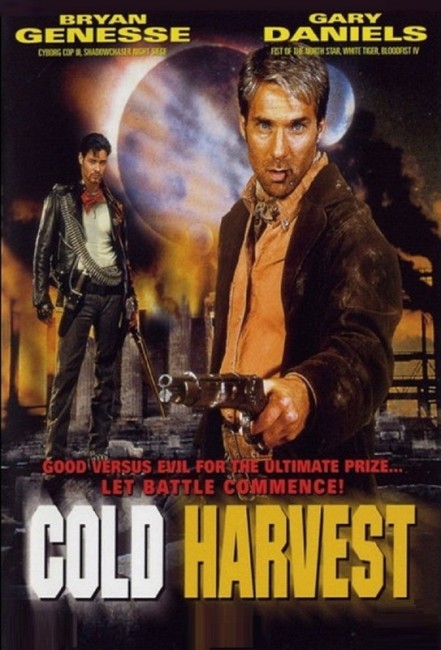 The Earth has been devastated by a meteor, which has caused dust to block sunlight, unleashed a plague and brought about the downfall of civilisation. Six people with immunity to the plague, including Oliver Chaney, are being transported to safety only for the convoy to be hijacked by the warlord Little Ray and all but Oliver’s wife Christine killed. When Little Ray realises who he has killed, he attempts to locate Christine who is pregnant with Oliver’s child, which will also have immunity. Christine is found by Oliver’s estranged twin brother, the bounty hunter Roland, and the two of them try to stay alive while being hunted by Little Ray.

Cold Harvest is a B-budget post-holocaust action film made by Nu World/Nu Image, a production company since the 1990s specialising in mostly low-budget action films before gaining some respectability with high-profile releases such as The Expendables (2010) and sequels. (Nowadays the company goes by the name Millennium Films). Nu World shot most of their films during the 1990s in South Africa (as Cold Harvest has been). Other Nu World/Image’s films include Cyborg Cop (1993) and its sequels and the Project Shadowchaser and Operation Delta Force series.

Cold Harvest is a competently made if unremarkable entry in the post-holocaust action genre, a theme Nu World/Image has touched upon in several of their films. The plot could really be a Western. It takes little imagination to see how it could have been with only minimal rewriting – horses substituted for the dune buggies and motorbikes, Indians for the mysterious group that live on the edge of town, the hijack of a wagon train. The film even seems to consciously evoke the Western at times with saloon brawls and people wearing leather chaps.

The characters are modestly well etched. Particularly good is Bryan Genesse, usually an obnoxiously macho hero in Nu Image’s films, who instead this time plays a tight-lipped, charming villain – and quite well. On the other hand, Gary Daniels’ blonde hero comes across as rather thick.

The action moves well with some occasionally impressive stylistic flourishes. Director Isaac Florentine has clearly set out to imitate John Woo with characters doing high-flying slow-motion kicks, twirling in mid-flight, and the hero and villain shooting at one another on either side of a wall. However, when Florentine does try to add an element of eroticism in a scene with Barbara Crampton soaping herself down in a hand basin, the results come out as laughable – Gary Daniels’ sits with his back to her, oiling and then with crashing Freudian symbolism stroking his gun. One also fails to understand what significance the title is meant to have in relation to anything that happens in the film.