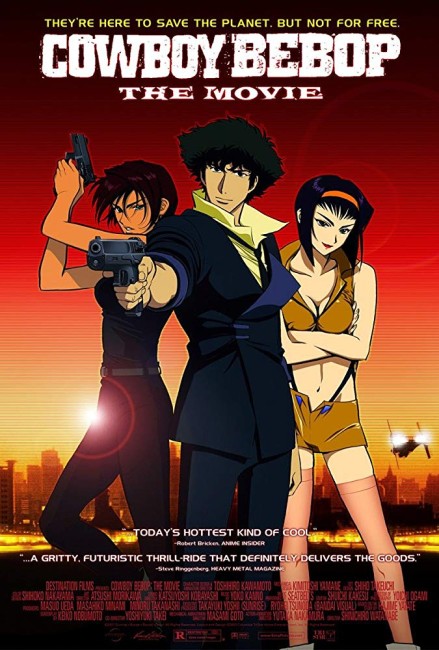 The year 2071. The bounty hunter Faye Valentine is tracking a stolen truck when it unexpectedly explodes. Afterwards, people in the area become infected with a strange disease. When a large reward is announced concerning the incident, Faye and her comrades, Spike Spiegel and the cyborg Jet, follow the trail of a mystery man in black that she saw leaving the scene. They discover he is a former military man Vincent Volaju who had the antidote to a deadly nanotech virus tested in his bloodstream on Titan and saw his comrades killed. Obsessed with revenge, he is planning to unleash stolen samples of the virus on unsuspecting crowds during a Halloween parade.

Cowboy Bebop: The Movie is a film based on the Japanese anime tv series Cowboy Bebop (1998). Cowboy Bebop featured the ongoing adventures of the intergalactic bounty hunters Spike Spiegel, Jet Black, Faye Valentine and the kid hacker Edward Wong. The series, although it lasted for only 26 episodes, was popular and built a small cult. Uniquely, every episode was named after a popular song – the original subtitle for Cowboy Bebop: The Movie, for instance, translates as Stairway to Heaven, but was removed in international release on fear of legal action from Led Zeppelin.

The film has the feel of a tv series expanded out into the big screen and still searching for its feet in the new format. It reminds a little of the first Star Trek film, Star Trek – The Motion Picture (1979), where the characters from the original were present but looking decidedly lost amid the spectacle. Cowboy Bebop: The Movie has a similar feel of characters out of their element. The film’s crucial failing is that the heroes familiar from the series are never particularly well integrated into the story concerning the black-garbed man planning to release the virus. Even on its own, the story about the revenge-obsessed villain is torpidly paced and not terribly exciting.

Cowboy Bebop: The Movie clearly has ambitions of being more than a film of a tv series (as indeed Star Trek – The Motion Picture also had). The film seems to want to be a melancholy epic of soulful meditation. It in particular reminds of the interior places that the work of Japanese anime director Mamoru Oshii travels into. During the latter third of the film, director Shinichiro Watanabe sets up some spectacular sequences – the shootout aboard the monorail, the scenes with the fighters taking off to stop the Halloween parade, and especially the climactic showdown with the villain atop what looks like a simulation of the Eiffel Tower amid a rain of hallucinatory butterflies and a gorgeous pure gold sky. The film goes out on a hauntingly transcendental coda with the villain wonders if the butterflies are real and the world around him an illusion, or the other way around. If one sits all the way through the Japanese credits to the very end, there is a coda inserted in English, asking “Are you sure this is the reality?”

On the other hand, Cowboy Bebop: The Movie is a film that has all the hallmarks of modern anime – epic-scale action and mass destruction, the reach for the transcendental, the soul-bared search for interior spaces – yet something about it seems ever so forced. It feels less like a film that is an epic anime than it does of a pre-established format – the tv series – trying to be big, epic anime. The soul-searching character drives in the middle seem unconnected to any of the recurring characters. Indeed, we learn almost nothing about the regular characters and they are virtual blanks to an audience unfamiliar with the tv series.

As with many science-fiction anime, there is a host of special credits for mechanical and vehicle designs, where people have been specifically employed to come up with designs for unique futuristic vehicles – but these seem inserted for the sole purpose of showing off such vehicles. While the film does occasionally touch the epic, the ending with the butterflies and the borrowing of the Chuang Tzu question of the butterfly dreaming it was a man or vice versa seems a touch metaphysically pretentious because it comes out of nowhere and is not tied to anything else.

Beneath all the epic flourish, Cowboy Bebop: The Movie feels like an older film, the type of anime that was being made circa the late 1980s/early 90s. Since then, Mamoru Oshii and Hayao Mayazaki have upped the bar in terms of epic quality, expanse and depth of detail; Cowboy Bebop: The Movie feels more like an anime from before they came along with its static backgrounds through which the only moving person is the principal character. More amusingly, the hero of the show is drawn with elongated three-quarters legs hearkening back to the look of 1970s anime. Of equal amusement is some of the poor spelling that turns up on the various signs throughout – Ruccian [Russian] Town, Analysys – while the opening credits even give the name of the film’s Editer.

A live-action English-language Cowboy Bebop tv series has been announced for some time in the 2020s.