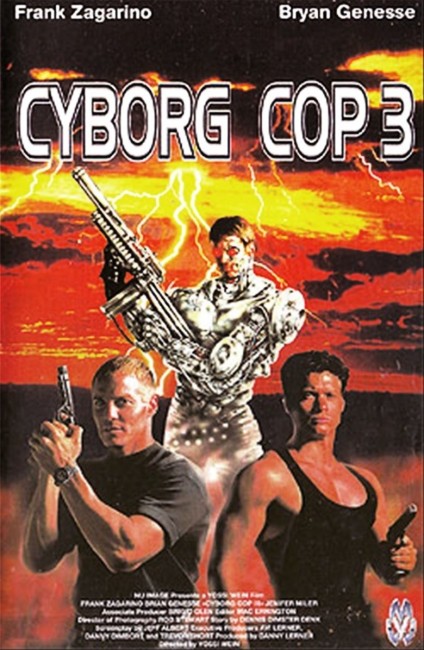 TV journalist Evelyn Reed is doing research into the Delta Tech corporation. She is contacted by an employee who smuggles her into the university research wing that Delta Tech has funded, There she discovers that the company is conducting experiments implanting insect DNA into students in the hope of creating a human hybrid capable of surviving atomic radiation. She also observes the company’s cyborg Adam in action where it demonstrates the ability to pick up atomic fuel rods with its bare hands and survive a car crash unharmed then finds that Adam has been built for military purposes. After obtaining video footage of Adam in operation, her cameraman is shot by Delta Tech heavies and she forced to flee. She receives aid from Max Colley and Saint Sebastian, two federal marshals who are on their way to start an assignment for Delta Tech. Delta Teach then unleashes Adam to eliminate the three of them.

Cyborg Cop (1993) was a routine direct-to-video that jumped on the late 80s/early 90s fad for killer cyborgs and androids following the successes of The Terminator (1984) and RoboCop (1987). Cyborg Cop was made by Nu World (aka Nu Image), a company that specialises in low-budget action films, many of which frequently cross over into genre material. Nu World, director Sam Firstenberg and star David Bradley returned for a sequel with Cyborg Cop II (1994). Cyborg Cop III was a third entry in the series, although contains no connection to the other films other than the presence of Nu World producer Danny Lerner and a similar cyborg/android theme, as well as also being shot in South Africa as the other two entries had been.

Cyborg Cop III must be the single worst film that Nu World ever put out, although Octopus (2000) does offer stiff competition. It is hard to know where to begin. Firstly, there is the title Cyborg Cop III, which is glaringly inaccurate in that the film features no cyborg cops – Adam is an android not cyborg; it is also a military machine not law enforcement thus negating the cop aspect of the title. Moreover, the alternate title Terminal Entry is entirely meaningless.

The central premise of the film is far more nonsensical than the ideas that turn up in films like these and verges on the completely ludicrous – a corporation is funding a university in order to do research into implanting insect DNA into students to create a hybrid  that can survive the nuclear holocaust, which somehow ends up transforming the students into invincible cyborgs.

And then there are the film’s laughable attempts to make South Africa look like it is America where the filmmaker’s lack of knowledge about American culture is woeful – the two heroes are supposed to be Federal Marshals but the script seems to assume that this means they are bounty hunters for hire. The action sequences are expectedly mindless.

Aryan blonde Frank Zagarino, best known for Nu World’s Project Shadowchaser films, and buzzsaw-voiced Bryan Genesse (who is surely the action movie equivalent of Joe Pesci) play off each other with a macho camaraderie that rings completely false. All the other performances are poor. As the head of the marshals, Ian Yule does an abysmal job at trying to imitate a Southern accent, while Ian Roberts looks more like a nightclub bouncer than the head of a large corporation.