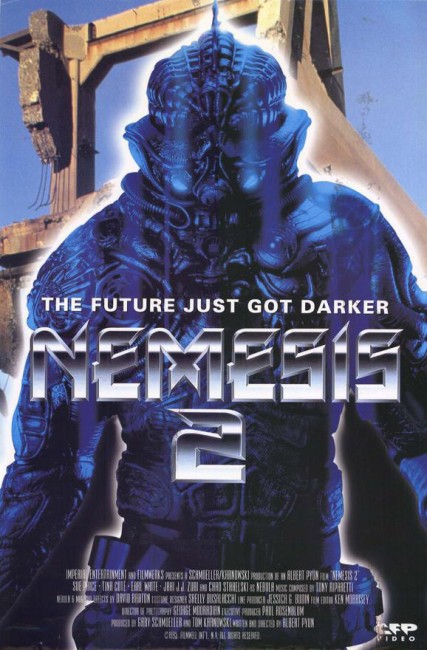 In the 21st Century, a perfected-DNA child is created as humanity’s last hope in a cyborg-dominated future. The child’s mother flees back through time to the East African desert in 1980 with the child. The mother is then killed by pursuing cyborgs. The child is taken and raised by a native tribe. As she grows into womanhood, the child Alex sees the entire tribe slaughtered by a pursuing Nebula android. As the Nebula comes after her, she flees through the desert. As she is forced to fight for her life, Alex comes to discover the super-human abilities within herself.

Albert Pyun is a prolific director of direct-to-video sf/action films. Almost all of Albert Pyun’s films – Cyborg (1989), Knights (1993), Heatseeker (1995), Omega Doom (1996) and this ongoing series of Nemesis films – feature kickboxing cyborgs and/or androids in post-holocaust or Cyberpunk settings. While Albert Pyun’s films brim with action, their quality is generally not very good – it is characteristic of Pyun’s films that he does not seem aware of the distinction between an android and a cyborg. The best of Pyun’s films is the first Nemesis (1993) where Pyun fused his standard cyborg combat with a fine employment of Cyberpunk tropes.

Nemesis 2: Nebula was the first of three sequels to Nemesis (the first two of which were shot back-to-back). None of these sequels have anything to do with the first Nemesis other than featuring the common theme of androids/cyborgs trying to take over society. Nemesis 2 slips more into being a copy of The Terminator (1984) with a killer android coming back through time to pursue a heroine, although the look of the killer cyborg takes the sequel far closer in spirit to Predator (1987). There is no more plot to Nemesis 2 than that – the entirety of the film exists as a single action sequence without pause. There are times that one wishes there had been a little more in the way of plot – like explaining more about what the two girls are doing and what is the significance of the gold coins they are hiding.

That said, Albert Pyun makes a competent action film out of Nemesis 2. The film moves with pace and the Arizona locations (standing in for East Africa) are impressively photographed. Some of the stunts Pyun stages are breathtaking – like one where heroine Sue Price leaps from a building at the same time as shooting at a flaming cyborg falling alongside her and holding a corpse as a shield from its return fire.

Sue Price is the another of Pyun’s would-be discoveries that he has taken from a kickboxing/body-building background – following the likes of Olivier Gruner, Kathy Long, Keith Cooke and Jean-Claude Van Damme. (Price had competed in various national US bodybuilding championships throughout the 1990s before being recruited by Pyun, although failed to go onto any other acting roles outside of the Nemesis films). All of the aforementioned look impressively lithe and can throw a backkick with the same lissom grace that a dancer can pirouette – and cannot act worth a damn. Certainly, Sue Price has an asexuality and a body-builder’s muscularity that looks convincingly super-human, and with golden-bronze skin, blonde dreadlocks and cool blue eyes, is visually striking.