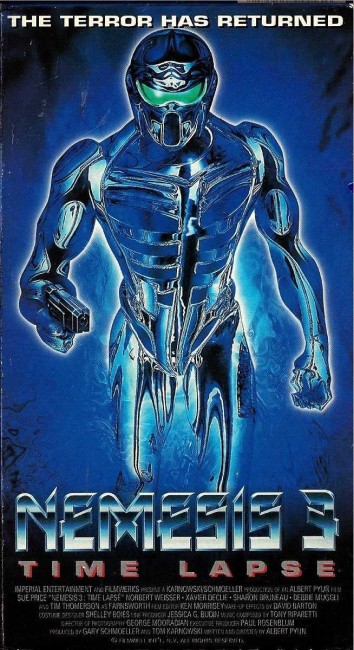 Alex comes around in the desert suffering from amnesia. Aided by Farnsworth 2, who unaware to her is an illusion-projecting cyborg bounty hunter, she tries to piece her memories together. Gradually, she begins to remember her flight from other killer cyborgs and her bid to rescue her sister who has returned through time to bring her back to the future.

The first Nemesis (1993) is one of the best of Albert Pyun’s Cyberpunk/killer cyborg films. Pyun’s sequel Nemesis 2: Nebula (1995) was almost entirely unrelated to that, other than the basic theme of both featuring cyborgs/androids trying to overthrow humanity. Nemesis 3 however directly follows on from Nemesis 2 – the two can be run together without a break. Indeed, both films appear to have been filmed back-to-back – they both share virtually the same credits and some actors are credited as being in both films despite having appeared only in one.

Nemesis 2 had almost nothing in the way of plot, nevertheless proved an efficient sf/action vehicle by virtue of keeping its action moving the entire time. To its credit, Nemesis 3 at least tries to be something different and take the emphasis away from action. There is some (but not much) attempt at developing more plot. Unfortunately in the absence of action, there is not too much else to give the film any drive.

In an unwieldly dramatic structure, the latter half of the film becomes an entire flashback as Sue Price regains her memory – and then eventually turns into an sf-action chase film all over again. Only this time, Nemesis 3 is not as effective as its predecessor was – a car chase at the climax with digitally blurred dune buggies fails to work and the ending comes annoyingly abruptly as the film sets itself up for the next sequel, although even then the sequel that was made Nemesis 4: Death Angel (1996) seems set in a different future altogether.

On the film’s plus side, Nemesis 3 has some moments of immense strangeness. There is an intensely weird opening section with heroine Sue Price waking up with complete amnesia and Tim Thomerson turning up as a mercenary who unseen to her keeps unnervingly slipping back and forward between human and a gleaming metal robot skeleton and scanning her with glowing green eyes while she is unconscious. One of the more bizarrely entertaining elements are two female cyborg mercenaries played by Sharon Bruneau and Debbie Muggli who strut through the film like android drag queens, making sardonic asides about how the sand is playing hell with their circuits and turning to each other and laughing maniacally every time they kill someone.