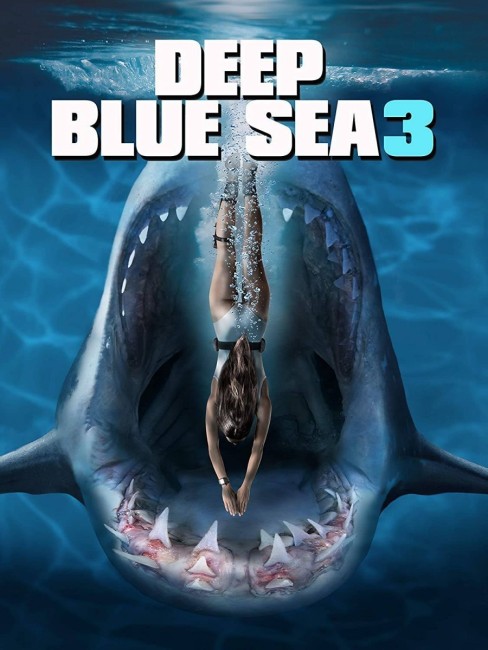 Marine biologist Emma Collins runs a research outpost on an artificial island off the coast of Madagascar that has been abandoned due to rising Climate Change levels. She and her team are studying the marine life of the nearby reef. One day they are interrupted by the arrival of a ship that Emma is surprised to find is commanded by her old college boyfriend Richard Lowell. He and his team work for a pharmaceuticals corporation and are seeking to recapture three escaped sharks. She allows them to make base there and renders aid as they set out to capture the sharks. However, things soon go wrong and people are killed. In the course of doing so, Emma discovers the sharks escaped from a facility several years before and have been genetically altered with larger brains. As Richard’s subordinates become increasingly more ruthless, this turns into a life and death battle.

Renny Harlin’s Deep Blue Sea (1999) was an entertainingly bad killer shark film that seems to fly in the face of its own absurdity. It attained a wide cinematic release when it came out. What Harlin and co did not see in retrospect was that it presaged the Killer Shark Film’s progression from a spate of B-budget Jaws (1975) copies to a series of wilfully ridiculous efforts that would culminate with Sharknado (2013) and sequels and a host of copycats.

Around the end of the 2010s, Deep Blue Sea’s copyright holders realised what any other filmmaker should probably have done over a decade earlier – that the original had sequel potential. This came out about with Deep Blue Sea 2 (2018) – a film so cheaply made and so unable to recognise the tongue-in-cheek amusement of the material that it just sank into being an incredibly bad movie. Deep Blue Sea 3 was a further entry in the series.

All it really took was a better director and suddenly the Deep Blue Sea series goes from a shitty sequel to a halfway reasonable B movie. Deep Blue Sea 3 is never more than an average B film but has a number of watchable moments. For one, director John Pogue gets in some quite good diving and underwater scenes. It is a film that seems to be at least making an effort and invested in what is going on. Certainly some of the dialogue it still down around the B movie level – one of the characters rather lamely calls the shark attack a “seamageddon” at one point.

Pogue creates some quite good individual scenes – like where a shark has Tania Raymonde pinned to the bottom of the ocean floor with its teeth digging into her side before it is tranquilised. In another scene, Nathaniel Buzolic has a big confrontation with rebellious subordinate Bren Foster, decides he wants to join Tania and her crew and turns to dive off the departing boat only the shark to jump right out of the water and grab him – a scene that works for its sudden unexpected surprise. There’s another scene where Emerson Brooks is fighting with one of the goons tumbling around on the dock and a shark jumps out of the water and bites the goon’s head off. The most entertaining scene is the climactic one with Tania Raymonde inside a garbage compactor trapped underwater without breathing equipment trying to hit the start button to crush the shark as its jaws snap only inches away from her face.