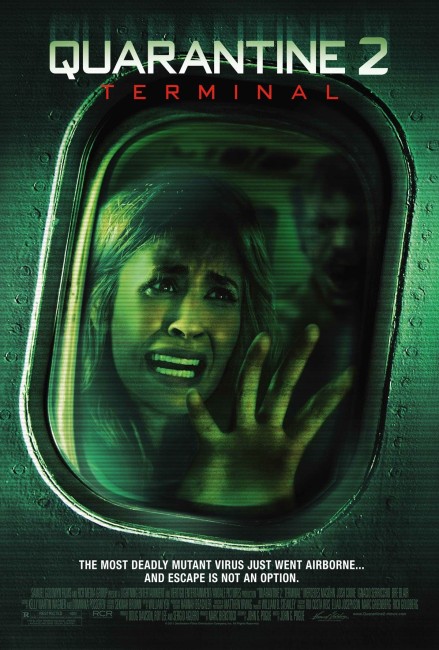 Jenny and her best friend Paula arrive for an evening shift as air hostesses aboard Flight 318 out of Los Angeles. Soon into the flight, one of the passengers becomes ill and then turns psychotic, biting others. The only way they can subdue him is to lock him into the toilet. The pilot makes an emergency return to Los Angeles, However, once on the ground, they are directed to a terminal only to find that all the exits have been blocked off, preventing them from getting to the rest of the airport. At the same time, other passengers and crew are turning into ravening zombies due to the bites and they in turn infect others. They group then find the terminal has been surrounded by armed CDC agents and declared a quarantine zone. As the number of zombies spreads, the remaining survivors flee and try to find a way out.

Quarantine (2008) – made by John Erick Dowdle who has since gone onto much bigger things – was an English-language remake of the Spanish [Rec] (2007). Both films were a unique attempt to rework the zombie film as Found Footage, claiming to be shot from the point-of-view of a news team trapped with a group of survivors as they are quarantined inside an apartment building and the infection rapidly spreads. Following Quarantine, [Rec]‘s two Spanish co-directors went on to make a string of sequels to the original with [Rec] 2 (2009), [Rec]3: Genesis (2012) and [Rec]4: Apocalypse (2014). Quarantine 2: Terminal is a sequel to Quarantine, although is unrelated to [Rec] 2 and any of the [Rec] sequels.

The airplane thriller took off for a time around this period with the likes of Flightplan (2005) and Red Eye (2005). There were a number of genre-related efforts, especially after Snakes on a Plane (2006), although these tended more to the ridiculous than the effective as in Tail Sting (2002) with mutant scorpions on a plane, Swarm (2007) with ants on a plane; and Lost in the Pacific (2016) with mutant cats on a plane. Surprisingly enough, the zombies on a plane concept had been done before with Flight of the Living Dead: Outbreak on a Plane (2007), although Quarantine 2 does let down on this somewhat and has the plane land soon into the film and most of the action thereafter take place in the terminal.

Quarantine 2: Terminal doesn’t concern itself much with adherence to Quarantine. There is the nominal connection in that this is clearly located in its aftermath of the quarantining of the L.A. apartment as seen on a tv news clip. It also follows on from the explanation for the outbreak offered in Quarantine when we find out that the virus was created by a doomsday cult. On the other hand, it dispenses with the Found Footage format that was used in Quarantine and all but one of the [Rec] films and is shot as a regular dramatic film – although we do have one scene towards the end where Mercedes Masöhn is trying to locate her way using a thermal imaging camera, as in the climaxes of both Quarantine and [Rec].

This film largely does its own thing, although it can be seen that the scenes with the survivors sealed into the terminal are analogous to the plot in both Quarantine and [Rec] that had survivors locked into the apartment building by the CDC as their numbers are infected/attacked.

Quarantine 2: Terminal works reasonably effectively in the scenes aboard the plane with the survivors having to deal with the spread of something horrific while in a confined space. Unfortunately, the film is never as challenging as Flight of the Living Dead in locating the entire film aboard such a confined space. Fully two-thirds of Quarantine 2 is located in the terminal. In these scenes, the film travels in far more standard directions and proves to be no more than a regular zombie film with survivors trying to flee as their numbers become infected.