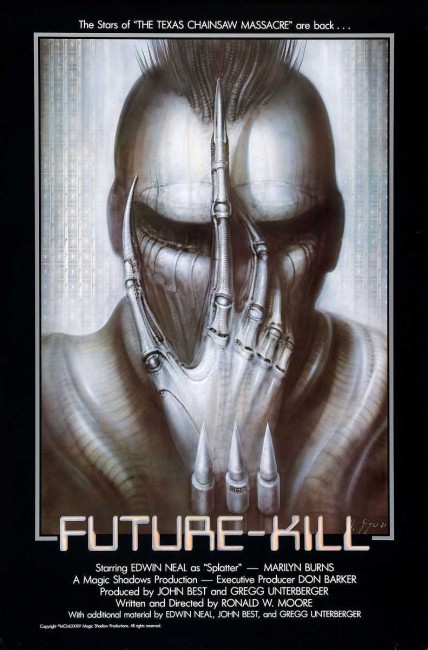 A group of disgraced frat rats are given the opportunity to earn their forgiveness by going into the anarchic quarter of the city and abducting the leader of the Anti-Nuke Mutants, a subculture of punked-out, lawless youth that protest against nuclear weaponry. However, as they set out to abduct their target, the students are attacked and their intended quarry killed by Splatter, a Mutant who hides his face behind metal body-armour and has become regarded as dangerously out of control even among the Mutants. Believed responsible by the Mutants for killing their leader, the frat rats are forced to flee through now hostile territory. A friendly Mutant, Julie, aids them on their journey. All the time they are pursued by the psychopathic Splatter.

Future-Kill was a film I spent years trying to locate. Around the time that the film was made, Fangoria magazine and several other genre publications gave Future-Kill a good deal of coverage. It always seemed to hold a great deal of promise – it was advertised with a poster from none other than cult artist H.R. Giger, best known for creating the creature in Alien (1979). Featuring prominently in the film’s promotion was the fact that it reunited Edwin Neal and Marilyn Burns, who played respectively the hitchhiker and chief victim Sally Hardesty in The Texas Chain Saw Massacre (1974). Located over a couple of decades later however, Future-Kill proves to be a considerable letdown. (Marilyn Burns’s role, for instance, only amounts to a campy cameo as an urban guerrilla near the end).

Director/writer Ronald W. Moore – who should not to be confused with Ronald D. Moore, the producer/writer from the various modern Star Trek incarnations and other tv series like Battlestar Galactica (2003-9 ), Carnivale (2003-5) and For All Mankind (2019- ) – clearly had ambitions of making a Cyberpunk film. Alas Moore’s (lack of) budget causes such ambitions to fall flat.

The action scenes are cheaply and unconvincingly directed. Moore’s attempts to create a futuristic atmosphere amounts to no more than highlighting a series of 1980s New Wave fashions and a general punked-out look. Indeed, outside of the character of the armoured cyborg Splatter, Future-Kill could almost entirely be set contemporary. To Moore’s credit, the character of Splatter does work with some modest effect – Edwin Neal at least has some presence and comes accompanied by some cheaply effective effects, even if most of the film’s budget appears to have been blown on obtaining these.

Moore has appropriated most of his plot from the then-recent success of Walter Hill’s The Warriors (1979) – of a group having to making a night journey while hunted through alien urban gangland territory. Here though, Moore seems to have an oddly naive view of society – his anarchic urban wasteland is not one that is inhabited by drug addicts and derelicts or criminals and street gangs, as you might expect in a large modern city, but by punked-out anti-nuclear protestors.

By and large, all the anti-nuclear protestors that one ever met during the 1980s seemed to be middle-class people, at most the modern equivalent of 1960s flower children, rather than a lawless urban underclass, who are generally people who have given up on mainstream society, not an organised group that seems to be trying to save it. Clearly, Moore is in love with the punk anarchy his Mutants represent but this does sit at odds with the notion of political conscience protestors. Maybe it is the fact that Future-Kill was made in Austin, Texas – a state that is a hotbed of redneck Americana – that has allowed street gangs, the dispossessed and political protestors to all be tarred with the same brush.