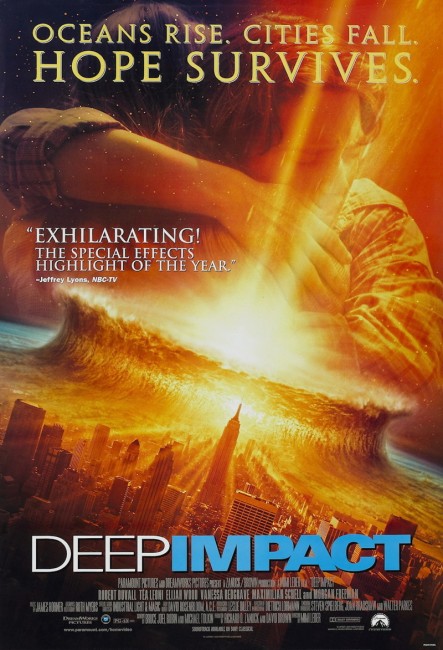 Junior tv reporter Jenny Lerner investigates what she thinks is a White House sex scandal. In doing so, she unwittingly uncovers government plans to avert a comet the size of New York City that is on a collision course with the Earth. As the comet nears, The President launches a manned NASA mission to detonate nuclear warheads and deflect its path. At the same time, a national lottery is held to select people to be placed in safety in giant underground shelters.

Every year studios seem, either by coincidence or a desire to outdo one another, hit upon a particular theme all at once – in 1997 it was volcano movies – Dante’s Peak (1997) and Volcano (1997); the year before big budget alien invasion films – Independence Day (1996) and Mars Attacks! (1996); and in 1998 it was asteroid/meteor collision films with Deep Impact and Armageddon (1998). Asteroid/meteor collision films have not fared particularly well in the past – remember the flop of Meteor (1979) and the dire Asteroid (tv mini-series, 1997), with only the largely forgotten tv movie A Fire in the Sky (1978) having been in any way watchable. After this point, the asteroid/meteor collision film has become the regular stuff of cheap Syfy Channel disaster movies.

Deep Impact was originally a project to have been directed by Steven Spielberg. However, after Armageddon was announced, Spielberg backed out and turned the project over to Mimi Leder, a director who had previously premiered on his tv series ER (1994–2009) and made one film, the unexceptional The Peacemaker (1997). The script had originally started out intended as a remake of When Worlds Collide (1951) by producers David Brown and Richard Zanuck and had been announced by them as long ago as 1978. The finished version comes from Bruce Joel Rubin, who made two afterlife fantasies Ghost (1990) and Jacob’s Ladder (1990), which both inserted some challengingly new ideas into traditional takes on afterlife themes, and Michael Tolkin, who also wrote an intriguing afterlife drama The Rapture (1991) as well as the great The Player (1992).

Deep Impact starts out giving some hope that it may reverse the meteor-movie trend. The opening promisingly seems intended as a sly dig at the media obsession with Presidential scandal at the time the film came out (even though Deep Impact was well into production before Monica Lewinsky was propelled into a household name) with junior tv reporter Téa Leoni thinking she has uncovered a juicy piece of White House scandal-mongering but instead realising that she has accidentally uncovered plans to try and avert the disaster. This segues into an, if not scientifically believable, at least exciting sequence involving a manned attempt to land on the comet. The climax of the film also has some fine mass disaster effects sequences.

Unfortunately bookended in between them, Deep Impact falls completely apart. The film wants to tell a poignant story about various characters as they meet the impending holocaust but the different dramas it raises – young Elijah Wood’s decision to abandon his place in the survival shelter and go back for his girlfriend; Téa Leoni’s reconciliation with her estranged father after the suicide of her mother; aging shuttle pilot Robert Duvall coming to regard wounded commander Ron Eldard as the son he never had – have a melodramatic insipidity that is infuriating.

Despite Deep Impact‘s two-hour length, the film only ever skates across the surface of these melodramas – one would have expected Elijah Wood’s journey back to his girlfriend to have been one fraught with dramatic perils, for example, but all that one sees is him setting out and then just arriving back home. You get the feeling that you have wandered into a disaster movie that has been made by people who have watched too many Academy Award movies – a disaster movie filled with niceness and nobility and where no untoward sentiment ever encroaches.

The film almost becomes absurd in its saccharine treatment – looting and increased social disorder is mentioned as one of the effects of the impending holocaust but all that one ever sees of any of this is a big traffic jam on the highway; Vanessa Redgrave commits suicide but the film seems to almost deliberately avoid any mention of the actual words, it all takes place off-screen and is only ever alluded to. After the maddening banality of Deep Impact, all that Armageddon needed to do to become the better of 1998’s two asteroid movies was simply to turn up. [Famous last words!!!].