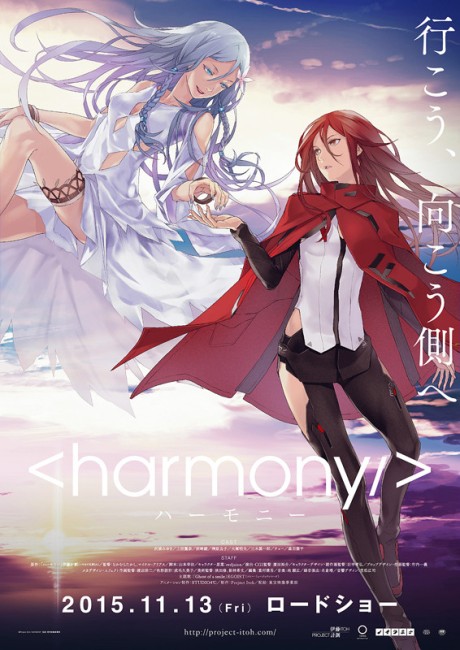 It is the future. Tuan Kirie has grown up in a Japan that has been regulated by Watch Me, an implant that warns of any dangers and regulates the wearer’s health. This has resulted in a society that has lost much individuality and become homogenous. Ten years earlier, Tuan was befriended by Miach Mihie who had radical ideas about defying the system and being able to live naturally. Miach devised a scheme to hack the Watch Me program and cut off everybody’s vitamin supplements, which would kill off the population, leaving them unable to digest food. Miach elected to commit suicide rather than allow her body to be controlled but Tuan could not bring herself join her. Tuan now works as a Helix Inspector, policing genetics in outlying regions that are not dictated by Watch Me, but still retains non-conformist ways. After being busted by a superior for dealing in illegal alcohol with Tuareg locals, she is sent back to Tokyo for ethical re-education. She meets up with Cian Reikado, who was also friends with Miach. As they sit down to dinner and go over old times, Cian abruptly plunges a knife into her throat and kills herself. This is part of a sudden spate of suicides that occur worldwide at the same time. Tuan presses her superiors to be allowed to investigate and goes on the trail of Miach whose body disappeared after her death. As the investigation takes her around the world, Tuan discovers that Miach may still be alive and has become the basis of a series of experiments by a rebel group. They are seeking to trigger the Harmony program that will turn all those connected to the Watch Me networks into people that no longer have free will.

American-born Michael Arias has the distinction of being the first Westerner to direct for a Japanese animation studio. Having previously worked in visual effects before moving to Japan to work with several of the anime studios there, Arias mounted his directorial debut with Tekkonkinkreet (2006), which was greeted with reasonable acclaim around the world. Arias subsequently directed the live-action non-genre Heaven’s Door (2009) and then returned to anime with Harmony. His co-director this time is Takashi Nakamura who previously made the Nightmare segment of Robot Carnival (1987) and a couple of feature films with Catnapped (1995) and A Tree of Palme (2005), neither of which seem to have terribly high profiles.

The film is based on the novel Harmony (2010) by the Japanese science-fiction writer Project Itoh. This was the pseudonym of Satoshi Ito who died in 2009 at the age of 34. At the time, Itoh had only released two novels but left behind two others that were posthumously published, as well three collections of short stories and two of movie reviews collected from his website. His work received a number of awards, including the prestigious Philip K. Dick Award upon being published in English.

Itoh has also proven popular in terms of film adaptations. There was the previous The Empire of Corpses (2015) from a different animation studio, a Steampunk work set in an alternate Victorian England that has developed following Frankenstein’s resurrection experiments. There is also the subsequent adaptation of Genocidal Organ (2017), which was supposed to come out before this but suffered delays due to the financial collapse of its studio, necessitating that the release of Harmony be speeded up.

Michael Arias has made a concerted effort to move away from the Cyberpunk and dark future design schemes that have dominated science-fiction anime’s look for the past two decades. Rather than a dense technologically-overwhelmed future, we have a world designed in gracefully sweeping curves where the technology has seamlessly slipped in to be absorbed. Pointedly, the film also moves away from the action and mass destruction that fuels most anime – apart from a pursuit/shootout with a plane at the start – and places the emphasis on story and dialogue.

The other intriguing choice is the style of animation. While most theatrically-released anime these days has made a move towards photorealistic detail, Arias goes the other way and readily adopts the simplistic, angular character lines of anime of the 1970s through to the 1990s. For some reason, the film is also designed in an overwhelmingly pink visual scheme.

Michael Arias apparently made all effort to be as faithful to the Project Itoh novel as possible. This results in a strong character-driven story. It is also a film that sets up and deals with a complex portrait of the future – I was reminded quite often of Gattaca (1997) – and a story that definitely requires you to pay attention. What we eventually get is a quasi-Utopian future – the theme of a eugenically engineered or cyber-monitored utopias where the push towards conformity and homogeneity masks troubles beneath the calm surface is one we have started to see in other anime works such as Appleseed (2004) and Psycho Pass (2012-4). Harmony pushes that to an extreme where beneath the homogenous disquiet lurks the potential to erase any concept of free will.