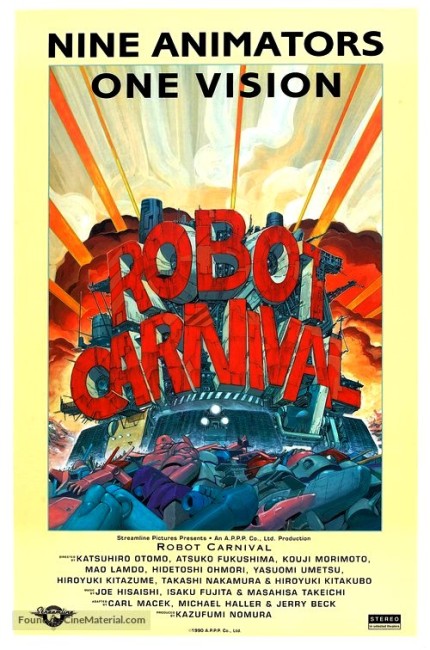 A vast machine travels across the desert from out of which robots emerge to dance and perform. Franken’s Gears:– A scientist brings a robotic creation to life, although his ramshackle equipment and its stumbling movements end up destroying his laboratory. Deprive:- During an invasion by alien robots, a young girl is abducted. Her android companion tackles the robots and then the alien overlord to rescue her. Presence:- A man who feels bereft of companionship builds a beautiful robot doll. However, as she comes to life, she gains her own personality and desires her freedom. He responds by smashing her. In later years, as an old man, he is haunted by visions of her. Starlight Angel:- Two girl friends attend a fair that features robot attractions. One of them is drawn into an exhibit that whisks her away into a dream with robots. Cloud:- A small robot boy witnesses many marvels in its slow journey. A Tale of Two Robots Chapter 3: Foreign Invasion:- As an evil foreign genius invades Japan in a giant mecha, locals construct their own ramshackle manned fighting robot to repel him. Nightmare:- As night falls on the city, a robotic overlord brings all the machines to life in diabolic chaos.

I have always been intrigued by Robot Carnival, which is cited as one of the less well-known early films from Katsuhiro Otomo. The following year, Otomo directed the stupendous Akira (1988), one of the cornerstone works of the modern cult of anime. Otomo subsequently went onto direct Steamboy (2004) and the live-action likes of World Apartment Horror (1991) and Bugmaster (2006), while his name has been attached in various capacities to a host of other anime works such as Roujin Z (1991), Memories (1995), Perfect Blue (1997), Spriggan (1998), Metropolis (2001) and Short Peace (2013).

Robot Carnival falls into the fad for anime anthologies – indeed, was one of the first of these – see also Neo-Tokyo (1987), Love Story (1991), Memories, Genius Party (2007), Genius Party Beyond (2008), Short Peace, Winter Days (2013) and Western-inspired ones such as The Animatrix (2003) and Halo Legends (2010). With Robot Carnival, a group of unknown animators have been given the direction to each produce a short film based around the common theme of robots.

The two anthology episodes he made for Robot Carnival and Neo-Tokyo, which was both released only two months apart, are Katsuhiro Otomo’s earliest works as a director. Notedly, Otomo only co-directs the wraparound segments here. These make for an amusingly slight joke. In the opening piece, a vast machine slowly trundles across the desert, its massive bulk appearing up over a dune, shaking the tiny village beneath as fireworks then go off and its frontispiece is shown to form the words ‘Robot Carnival’, whereupon machines of all types emerge to cavort and dance. In the post-credits epilogue, the same leviathan struggles to make its way up a dune and finally blows up, the pieces falling and running everywhere. Years later, a tiny wind-up doll is found by a nomad who brings it home to his family where they marvel as it dances, before it blows their home up. The last we see is the nomad’s donkey lying upside down amid the letters ‘End’.

The first episode Franken’s Gear comes from Koji Morimoto, a director who has only made segments of other anime anthologies such as Memories, The Animatrix and Genius Party Beyond. This is slight in conception – it has been designed like a standard Frankenstein film but where the scientist brings a robot to life instead. The segment has no dialogue – indeed, there is no dialogue until we reach the third episode – and the piece instead acts as a glorious orgy of mass destruction first with the scientist’s rickety lab machinery in the process of exploding and collapsing and secondly as the robot comes to life, destroying the laboratory and everything around it.

The second segment Deprive comes from Hidetoshi Omori who has only gone onto to make two not very well known anime feature films Urotsuki (2002) and Megumi (2008). This is a much more traditional anime piece both in style and action. It is a largely plotless segment involving a robot invasion where a young girl with typical giant-sized eyes is abducted by an evil villain with a wild mass of white hair and an eyepatch. There is much animated mass destruction, fighting and shooting as the standard anime boy hero (who would confusingly also appear to be her android companion) flies to her rescue and defeats the villain. The animation is cut-price, more like the limited tv anime of the 1970s, but is at least conducted with a great deal of vigour.

Yasuomi Umetsu subsequently went onto make the anime films, Kite (1998), later remade as the live-action Kite (2014), which gained controversy for its heavy doses of violence and sexuality, and Mezzo Forte (2000). His Presence is the most conceptually ambitious of the segments, detailing with a man’s construction of a doll-like companion, where she rapidly gains self-awareness and divines her purpose then decides that she desires freedom to which he responds by smashing her to pieces. The episode then leaps forward many years to where he is an old man and haunted by visions of her coming back to him. The emphasis here is not on action and mass destruction but on the more lyrical, detailing the pastoral scenes and the richness of the detail around the town where the scientist lives. The final scenes hold a considerable haunted tenderness.

Starlight Angel is a slight piece. Two girl friends attend a carnival that features robot exhibits. One of the girls is drawn into a ride put on by robots. For some reason, she is quickly propelled into battles between giant flying robots with lots of things blown up and where she is a superheroine. The ride (or dream) then appears to end and the two friends reunite.

Cloud is a lovely piece of abstraction in which a small child-like robot ambles across the frame from right to left as various scenes play out in the background. These range from clouds and landscapes to animals and fish, spirit forms, even UFOs and the A-bomb. I have read one review that compared this to being an allegory for the robot walking across the whole of human history but in truth the progression of imagery seems far more random than that.

A Tale of Two Robots Chapter 3: Foreign Invasion comes from Hiroyuki Kitakubo, probably the only other director present to go on to something of acclaim. Kitakubo’s other work included the Otomo-mentored Roujin Z and the celebrated short film Blood: The Last Vampire (2000). Kitakubo’s segment is a parody of Japanese giant robot and mecha animation – it is set in an unspecified historical period where the two sides, an English-speaking invader and a group of peasants, go to war with ramshackle rattan and wooden giant mecha robots. The episode comes with a pace of manic delirium and is completely enjoyable for what it is.

The final segment is Nightmare from Takashi Nakamura who has directed a couple of other little-known features and most notably co-directed Harmony (2015). Nakamura has imagined this as a robotic version of the Night on Bald Mountain segment from Fantasia (1940) in which a giant robot shape stands over a city and conjures forth all the machinery in a diabolic dance. Though brief, the episode captures something beautifully phantasmagorical.