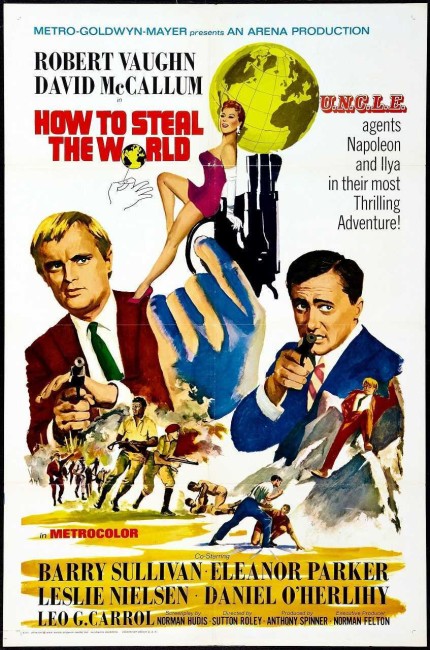 U.N.C.L.E. agents Napoleon Solo and Ilya Kuryakin investigate the disappearances of a group of top scientists. The disappearances are always followed by a series of robberies where small trivial items are stolen from the apartments and offices of the scientists. Solo and Kuryakin follow one of the kidnapped scientists into the Himalayas where they uncover a plot by a megalomaniac T.H.R.U.S.H. agent to create a gas that will turn the entire world into mindless zombies.

The Man from U.N.C.L.E. tv series (1964-7) was one of the most popular of the shows during the 1960s to jump on the spy bandwagon inspired by the James Bond films. Indeed, there is a direct link between James Bond and The Man from U.N.C.L.E. in that the series grew out of talks with Ian Fleming and the character of Napoleon Solo was purportedly based on a minor character in the Goldfinger (1959) novel.

The series was very popular in its day and led to a series of seven films being spun out for theatrical releases edited from episodes of the series. How to Steal the World was the final of the seven The Man from U.N.C.L.E. theatrical releases (see below for the other titles). The source of this film is the double-episode The Seven Wonders of the World Affair, a title that has as much relationship to the plot as the one the films has been given. (This film’s rather extravagant promise should more accurately have been How to Subjugate the World).

As a film, How to Steal the World shows up the inadequacies of something that was originally designed for the tv screen. A film must be a complete entity for the 90-120 minutes it holds the audience in its thrall and cannot afford the familiarity with characters and scenario that a tv series develops over a longer period. On the screen, the film seems to be developed with almost a complete indifference to any characterisation – Solo and Kuryakin are totally blank, it is just assumed that we know who they are.

The film also suffers from a cluttered and frequently absurd plot – the red herring about the theft of the belongings is far-fetched and the Wild Goose chase just that. The lack of location work also shows up markedly on the screen – to stand in for the Himalayan locations, the filmmakers seem to have bizarrely gone and shot in the desert instead of the mountains. Nor does the Hollywood pool locations for the T.H.R.U.S.H. base suggest the Himalayas either. Although in its favour there are some reasonably budgeted sets and shoots on a futuristic looking city location.

Still, this is a likeable film and is sometimes played with a stylish wit. There is a deadpan sense of humour to it all – David McCallum announces “Luckily I have something up my sleeve,”.. and pulls up his trouser cuff; or the ship they pursue to sea reveals, as it is seen leaving, its name as ‘The Wild Goose’. The two leads invest the absurdities with a patient deadpan. Robert Vaughn plays with an urgent importance and David McCallum, who became a teen sex symbol as a result of the series, a clipped coldness. Some of the shots designed to look up through glass tables, even an action sequence with a car being attacked swung on the end of a hook or the credits that dramatically freeze-frame over action shots to give the names of cast and crew, are quite smart.

The other theatrically released The Man from U.N.C.L.E. films, all recut from tv episodes, are To Trap a Spy (non-genre, 1965), The Spy With My Face (1965), One of Our Spies is Missing (1966), One Spy Too Many (1966), The Spy in the Green Hat (1967), The Helicopter Spies (1967) and The Karate Killers (1967). The series was also revived as the tv movie The Return of the Man from U.N.C.L.E.: The Fifteen Years Later Affair (1983). The tv series was later given a theatrical remake as The Man from U.N.C.L.E. (2015) with the roles of Napoloeon Solo and Ilya Kuryakin recast with Henry Cavill and Armie Hammer, although this is very different from the tv series and has no genre elements.