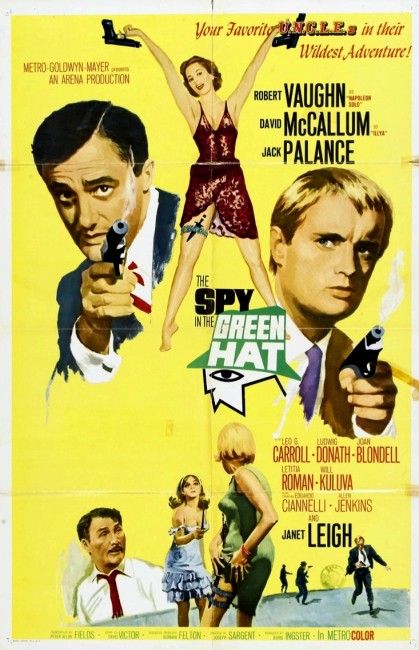 U.N.C.L.E, agents Napoleon Solo and Illya Kuryakin fail in their efforts to prevent T.H.R.U.S.H. operatives from uplifting the former Nazi scientist Henrich Van Kronen. They follow Van Kronen’s trail to the Sicilian vineyard base where T.H.R.U.S.H. agent Louis Strago conducts operations under the guise of a wine exporting business. There Strago enlists Van Kronen’s help in a plan to fire nuclear missiles to divert the Gulf Stream and turn Greenland into a fertile land that T.H.R.U.S.H. can take over. On the run from Strago’s men, Napoleon is forced to hide under the bed of local girl Pia Monteri. He is found by her grandmother who demands at gunpoint that Napoleon marry Pia. Napoleon manages to flee but Pia’s grandmother calls on her cousins, the Stiletto Brothers, three Mafioso in the US. They come hunting Napoleon, determined to drag him to the wedding. In the midst of this, Napoleon and Illya try to stop Strago’s launch of the missiles.

The Spy in the Green Hat was edited together from the two-part episode The Concrete Overcoat Affair (1966). The new title is an oddity – Will Kuluva (who was also the original Mr Waverly in the series’ pilot that was released to theatres as To Trap a Spy) does eventually turn up near the end as a T.H.R.U.S.H. high-up who wears a green hat. However, his appearance is such a brief one that it throws the film off, leaving you with the feeling that he should have had a more significant role given that the film is named after him.

More so than any of the other Man from U.N.C.L.E. films, this is played at a level of madcap comedy. This is particularly the case during the Sicilian village scenes in which Robert Vaughn finds himself literally forced into a shotgun wedding with Letitia Roman after hiding under her bed from pursuers, as well as any of the scenes back in the US involving the Italian mobsters trying to drag Vaughn to the wedding. One must remember that the film was made before The Godfather (1972) became the defining work on matters Mafia and so the mobsters are treated as cliche gangsters from a 1930s/40s film running around in fedoras and armed with tommy guns.

Most of the Sicilians are played as outright caricatures – at which it must be said that Letitia Roman plays with a good deal of natural cheer and energy as the would-be bride. In particular, the scenes with the mobsters running around the warehouse become actual slapstick – the scene culminates with them diving for cover as David McCallum threatens to throw a ‘pineapple’, which promptly turns out to be just a pineapple.

Cast as the villain of the show, Jack Palance plays typically overwrought and melodramatic, enunciating every syllable as though he has to hiss it out through gritted teeth. He gets some rather creepy scenes trying to come onto Letitia Roman and pursuing her around the room and out onto the balcony. Janet Leigh on the other hand steals most of the scenes she is in out from under Palance. While she was usually cast as good girls in the era’s prevailing mold for Doris Day clones, here she gets to play slinky and seductive and with an alarming penchant for knives. There is a great catfight between her and Letitia Roman fighting atop a conference table.

Joseph Sargent was a veteran director of films and tv. His most famous film is probably the original version of the thriller The Taking of Pelham One Two Three (1974). He made a surprising number of works that fall within genre guidelines including the other The Man from U.N.C.L.E. film One Spy Too Many (1966); the computer takeover film Colossus: The Forbin Project (1969); the pilot for the tv series The Immortal (1969), with Christopher George as a man whose blood contains a universal panacea and the secret of immortality; The Man (1972) about the first Black President of the US; the tv movie The Night That Panicked America (1975) about the panic that ensued over the true life Orson Welles War of the Worlds radio broadcast; Goldengirl (1979) about an attempt to genetically engineer an Olympic super-athlete; the tv movie Tomorrow’s Children (1982) about test-tube babies; the horror anthology Nightmares (1983); the mini-series Space (1985), a fictionalisation of the Space Program; and Jaws: The Revenge (1987).