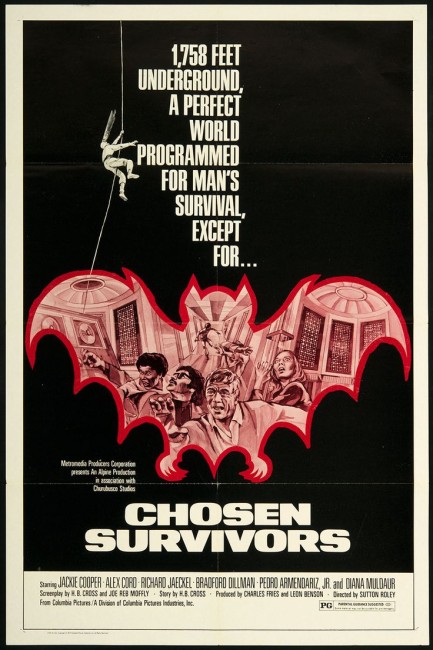 A group of ten people and a technician are gathered at a nuclear fallout shelter 1758 feet beneath the New Mexico desert. They are played a tape that tells them they were chosen from different speciality groups with the skills needed to stay in the shelter for five years until it is safe to return to the surface. They are then shown satellite pictures showing that nuclear war has broken out and devastated the surface. As they sink into the shock of knowing that they are all that is left, the habitat is invaded by vampire bats. They realise that the shelter was built in a series of caverns and the bats have snuck in through the ventilation system. With nowhere to go, they are now at the mercy of the attacking bats.

Chosen Survivors is a minor and nowadays largely forgotten film. It came out in an era of science-fiction films that included the likes of 2001: A Space Odyssey (1968), The Andromeda Strain (1971) and THX 1138 (1971), which between them created an image of a future that was overrun by technological perfection and white antiseptic sterility. Also around this same time, there was a spate of films about nature and animals turning against humanity and going amok, beginning with The Birds (1963) and hitting a peak with films such as The Hellstrom Chronicle (1971), Willard (1971) and Frogs (1972).

With its gimmicky bats in a nuclear fallout shelter premise, Chosen Survivors feels almost like someone decided to throw together the premise of The Andromeda Strain – a group of selected individuals locked in a big underground facility dominated by white-on-white antiseptic walls – with that of The Birds – animals turn on and attack humanity. In truth though (at least in modern retrospect), what we have is something that prefigures tv’s Big Brother (2000– ) – a group of people confined in a house and having to deal with a compounding series of twists and surprises that makes their situation more difficult and pits them against each other.

Chosen Survivors has been made on a modest budget with a cast that has largely been recruited from tv of the day, even a tv director. The film is economically constricted to a handful of sets – the depiction of the nuclear war, for instance, is shown only in terms of stock volcano footage with a poorly overlaid optical shot of a bridge in the foreground.

The main problem that the film has is that there has never been a convincing killer bat movie – see the likes of The Devil Bat (1940), Nightwing (1979), Bats (1999), Fangs (2001) and Vampire Bats (2005). To its credit, Chosen Survivors does use real bats in some scenes and the shots where we see them moving about in closeup have a great conviction. However, in the majority of scenes, the bats are simply optically overlaid and look like no more than cheap grainy inkblots buzzing around. The film does get itself together for one modestly effective scene where the group try to deal with the bats by erecting electrified grids along the length of one corridor and then turning the lights out as we watch the bats being crisped en masse up against the wires.

The main problem with Chosen Survivors is that it is on the slow side. The characters are not particularly interesting, despite some interesting moderately well known acting faces of the era among the cast list, and have little more depth than being afforded names and professions. The interactions and minor conflicts between them are tedious. They seem so blank that they present almost no emotional reaction to the end of the world – not the emptiness, despair or feeling of guttedness that one would expect of people encountering the destruction of all they knew. In fact, there seems more outrage reserved for the left-field revelation that comes about the two-thirds point where [PLOT SPOILERS] everything is exposed as an experiment than there does for the end of the world.

Sutton Roley had a career between the 1950s and 1990s directing almost exclusively television. Chosen Survivors was only the third of three theatrical films he made. Roley’s other films of genre interest are The Man from U.N.C.L.E. theatrical release How to Steal the World (1968) and the Bermuda Triangle tv movie Satan’s Triangle (1975).