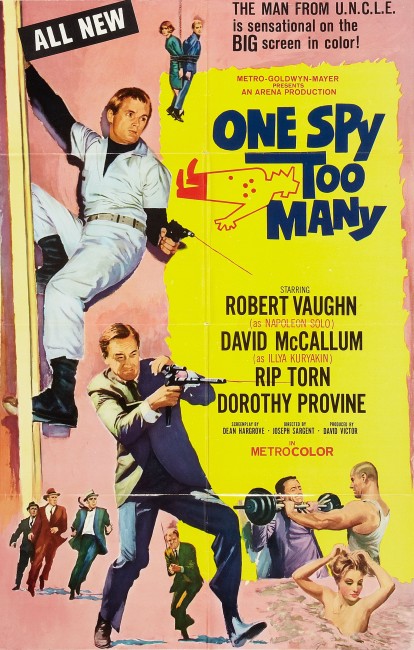 The industrialist Alexander engineers the theft of a suitcase of BG-13, a nerve gas that can sap an enemy’s will, from a US army test site. U.N.C.L.E. agents Napoleon Solo and Ilya Kuryaki are assigned to stop Alexander. As they discover, the megalomaniacal Alexander has claimed the title Alexander the Greater and takes pride in having broken every one of the Ten Commandments. He now has plans to use the gas to conquer the world. Solo and Kuryakin are forced to cooperate with Alexander’s estranged wife Tracey who is trying to get him to sign divorce papers to get back the million-dollar inheritance that Alexander has appropriated from her. In an adventure that takes them to Athens and into lost Greek tombs, they fight to stop Alexander’s world-domination plans.

The James Bond films were at the height of their popularity during this period. The Man from U.N.C.L.E. took the Bond spy antics but placed a far more light-hearted spin on them – and One Spy Too Many takes this light-hearted approach to a greater extreme than most of the other films. Even a car chase scene is scored with jaunty comedy music rather than dramatic music. One of the sillier elements is the need to write Dorothy Provine in as a character who turns up in every location they go and becomes the brunt of overly slapstick set-pieces such as getting dumped into a baggage carousel or carted away by a forklift while hiding on a pallet.

On the plus side, Robert Vaughn does the droll urbane charm to perfection. The film creates an appealingly flirtatious relationship between him and U.N.C.L.E. receptionist Yvonne Craig (a series of scenes that does not appear in the tv version of the episodes).

The Man from U.N.C.L.E. films never created much in the way of super-villains. There were occasional guest villains but none as memorable as ones that turned up in the Bond films of this period such as Blofeld, the title character in Dr No (1962) and especially Gert Frobe’s Goldfinger (1964). The one exception is Rip Torn’s Alexander the Greater here. Exactly how Alexander is trying to achieve world domination is only ever vaguely explained.

However, what makes One Spy Too Many memorable are the highly entertaining set-pieces it arranges around its villain. It almost entirely consists of these scenes – where Torn and Robert Vaughn play a giant game of chess using human pieces; a Grecian tomb that has been converted into a series of traps; a scene that was almost certainly inspired by the then recent success of Roger Corman’s Pit and the Pendulum (1961) where Robert Vaughn is tied up before a descending pendulum (and contrives an ingenious means of escape); the scenes running around a beauty parlour with Vaughn being attacked by a hulking Cal Bolder, who was also the Frankenstein monster in Jesse James Meets Frankenstein’s Daughter (1966); David McCallum being pursued around a health farm by killer tractors and buried in mud; Robert Vaughn racing along a runway in an open-top car trying to jump onto a small plane and stop Rip Torn getting away. These end up being incredibly exciting set-pieces.

Joseph Sargent was a veteran director of films and tv. His most famous film is probably the original version of the heist film The Taking of Pelham One Two Three (1974). He made a surprising number of works that fall within genre guidelines including a further Man from U.N.C.L.E. film The Spy in the Green Hat (1967); the computer takeover film Colossus: The Forbin Project (1969); the pilot for the tv series The Immortal (1969) with Christopher George as a man whose blood contains the secret of immortality; The Man (1972) about the first Black President of the US; the tv movie The Night That Panicked America (1975) about the mass panic that ensued over the true-life Orson Welles War of the Worlds radio broadcast; Goldengirl (1979) about an attempt to genetically engineer an Olympic super-athlete; the tv movie Tomorrow’s Children (1982) about test-tube babies; the horror anthology Nightmares (1983); and the mini-series Space (1985), a fictionalisation of the Space Program; and Jaws: The Revenge (1987).