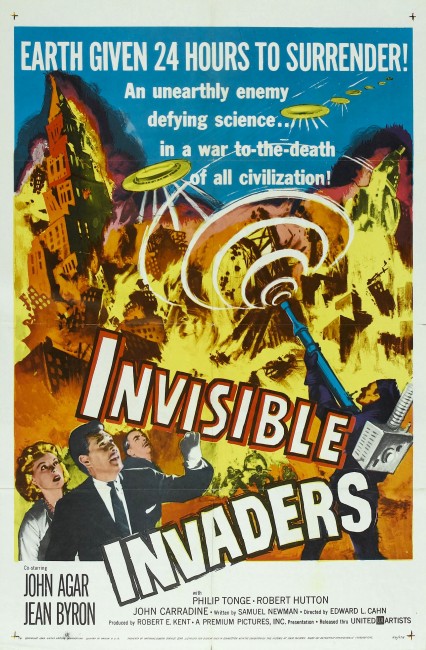 Dr Adam Penner quits as head of the US atomic research program but is shocked when the body of his recently deceased colleague Dr Karol Noymann appears to him. Noymann’s body has been animated by invisible alien invaders in order to get Penner to deliver a message to the politicians of the world, asking humanity to surrender to the invaders. Penner is ignored by Washington, so the aliens reanimate other dead bodies and conduct a series of attacks designed to bring the world down. Penner and several others take refuge in a bunker, trying to find a means of defeating the invisible invaders.

Invisible Invaders was one of the alien invader films from the 1950s. It was made by Edward L. Cahn, a B movie director who made a good many Westerns and crime thrillers, as well as the genre likes of Creature with the Atom Brain (1955), The She-Creature (1956), Voodoo Woman (1957), Zombies of Mora Tau (1957), Invasion of the Saucer Men (1957), Curse of the Faceless Man (1958), It! The Terror from Beyond Space (1958), The Four Skulls of Jonathan Drake (1959) and Beauty and the Beast (1961). Not to mention the fact that it stars John Agar and John Carradine, who both led substantial B movie acting careers throughout this decade.

Invisible Invaders is a cheaply made film. The same shots of trees shifting and the dirt being dragged by invisible footprints are repeated several times over. The film manages to offer a worldwide alien invasion that cannily takes place via stock footage of floods and ice hockey matches (!!!) in lieu of any mass destruction scenes. No doubt, the fact that aliens were invisible was a hidden blessing for Edward L. Cahn, allowing him to be able to sidestep having to create any elaborate special effects.

Despite the cheapness of the production, Invisible Invaders has a modestly effective atmosphere. The dubious science aside, there is an interesting plot – scientists besieged in a bunker against the reanimated dead outside – there is much here that prefigures Night of the Living Dead (1968) – and their attempts to find a way of combating the menace, which include venturing out and trying to trap one of the zombies in a pit of acrylic and capture the possessing alien before it flees the body. Edward L. Cahn creates reasonable tension – with a better director or even an improved budget, Invisible Invaders could have been a minor classic. Indeed, with its plot of alien invasion using the reanimated dead, you could almost call Invisible Invaders a more competent version of Plan 9 from Outer Space (1959).

Although such never actually features in the plot, the film manages to wind in the good old 1950s chestnut of the dangers of the atomic bomb. The threat of the new Atomic Age is placed as backdrop in a portentous opening narration. The end narration also makes an upbeat plea for international cooperation, going out on a shot of the avenue of flags outside the UN (despite the fact we have never seen any other countries engaged in the conflict). The one other thing that Night of the Living Dead emphasised when seen in contrast to Invisible Invaders is just how whitebread 1950s alien invader films were – the dead in Night of the Living Dead markedly come from all walks of society and racial groups; the dead here are all white men wearing suits.