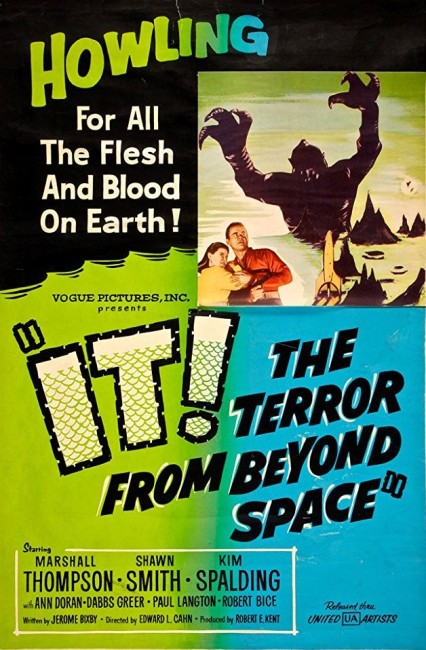 The Challenge 142 mission arrives on Mars to rescue Colonel Edwards Carruthers, the sole survivor of the Challenge 141 mission who has spent six months stranded alone. Carruthers’ nine comrades are all dead. Challenge 142’s commander Van Heusen disbelieves Carruthers’ story that the crew were killed by an alien and suspects Carruthers killed them so that he could have the supplies to himself. However, something sneaks aboard just before the mission lifts off. On the return voyage, the alien emerges and starts killing the crew.

It! The Terror from Beyond Space was directed by Edward L. Cahn, a hack who had made a number of genre B films of the era including Creature with the Atom Brain (1955), The She-Creature (1956), Voodoo Woman (1957), Zombies of Mora Tau (1957), Invasion of the Saucer-Men (1957), Curse of the Faceless Man (1958), The Four Skulls of Jonathan Drake (1959) and Invisible Invaders (1959). (It! The Terror from Beyond Space is the best of Edward L. Cahn’s mostly undistinguished genre entries). On script was Jerome Bixby, a minor writer from magazine science-fiction (he had written the famous It’s a Good Life story that was adapted for The Twilight Zone), had delivered screenplays for various episodes of The Twilight Zone (1959-64) and Star Trek (1966-9) and later came up with the story for Fantastic Voyage (1966). (See below for Jerome Bixby’s other genre scripts).

Jerome Bixby delivers a reasonable script, one that economically constricts the action to a minimal number of sets and keeps it moving tightly along. In fact, Bixby does so so well that It! The Terror from Beyond Space may be the first spaceboard alien film that takes place within only a 3-4 hour timeframe. There is a reasonable degree of interest generated in the various schemes of the crew to defeat the alien. Edward L. Cahn was a pedestrian director but rises above himself here to create a fair degree of suspense. The creature is cannily kept to the shadows – which makes it more effectively threatening – and there are some reasonable sequences such as the suspense-filled journey through the outer hatch and the attempt to rescue the blood supplies.