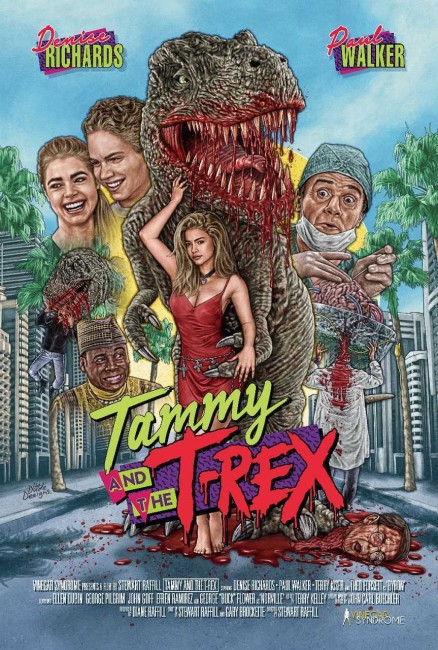 aka Tanny and the Teenage T-Rex

Tammy is a high school cheerleader in Los Angeles. She and Michael are attracted but the bullying Billy insists that Tammy is his and beats Michael up outside the school. Tammy later invites Michael over but other girls see him sneaking into her room and tip Billy off. Billy and his gang abduct Michael and abandon him in an animal park where he is savaged by a lion. The brilliant neurologist Dr Gunther Wachenstein comes to the hospital and takes Michael’s body away even though he is not yet dead. Wachenstein then transplants Michael’s brain into an animatronic T-Rex robot body. Trapped in the robot dinosaur body, Michael breaks out of Wachenstein’s warehouse laboratory and sets out to reunite with Tammy, while taking revenge and killing Billy and his gang. This has him subject to a manhunt by local authorities.

Tammy and the T-Rex was an oddity from the days when Jurassic Park (1993) went meteoric and filmmakers everywhere were rushing to make their own copycat dinosaur films. This era produced a bunch of oddities that included the likes of Carnosaur (1993) where Diane Ladd conducts a series of experiments that cause women to become pregnant with dinosaurs; Prehysteria (1993) and sequels, an inane trilogy where children befriend baby dinosaurs; and Theodore Rex (1995) where Whoopi Goldberg was a cop paired with a dinosaur partner.

Tammy and the T-Rex comes from Stewart Raffill Stewart, a British-born director based in the US. Raffill has made a number of adventure films, including popular hits like The Adventures of the Wilderness Family (1975) and The Sea Gypsies (1978). Beginning in the 1980s, Raffill made a number of genre films including The Ice Pirates (1984), The Philadelphia Experiment (1984), Mac and Me (1988), Mannequin on the Move (1991), Croc (2007) and Bad Girl Island/Sirens of the Caribbean (2007). Raffill recounts how Tammy and the T-Rex was made when a friend had constructed an animatronic T-Rex and offered use of it to Raffill if he could get a film together and shoot before the dinosaur was due to be shipped out in two weeks’ time. Most of the film was shot around Raffill’s L.A. home and environs.

The premise of the film – teenager Paul Walker’s brain is transplanted into an animatronic dinosaur body whereupon he tries to reconnect with girlfriend Denise Richards – has a head-scratching strangeness to it. For the most part, the film takes itself seriously. But then there are times that it does not – like whenever Terry Kiser turns up as the mad scientist, where Kiser’s over-the-top performance adds a campy, unserious element to the show. There is the entertaining absurdity of scenes with the dinosaur trying to use a payphone or playing Charades with Denise Richards. The film ends with Paul Walker’s brain removed from the dinosaur and kept in a bowl in Denise Richards’ bedroom where she does a sexy cheerleader striptease for it, which causes the fluid in the bowl to bubble in excitement.

The film also suffers from an uncertainty of tone. I was watching the 2017 restored print, which was given the film’s original name Tanny and the Teenage T-Rex on the opening credits. (Denise Richards is supposed to be Tammy/Tanny, although is never actually referred to by either name throughout). Here you can see that Stewart Raffill made the film with a much higher gore content and seemed to be aiming for the horror market. However, when it came to the original release, the gore was cut and the film pitched to a teen demographic and played as a light comedy.

The dinosaur animatronics are okay and the film cuts around them well enough to make the animatronic seems like it is alive. Less effective are when the film relies on other effects for the full-size shots of the dinosaur on the move. However, the main issue with the film is a ridiculous premise, no matter whether the film is being played as a teen comedy or a horror film.

The film includes some interesting before they were famous names including Denise Richards, later of Starship Troopers (1997) and The World is Not Enough (1999) fame, in her first leading role. There is also an unknown Paul Walker, later of The Fast and the Furious (2001) fame, as Denise’s boyfriend before he gets transformed into the dinosaur.