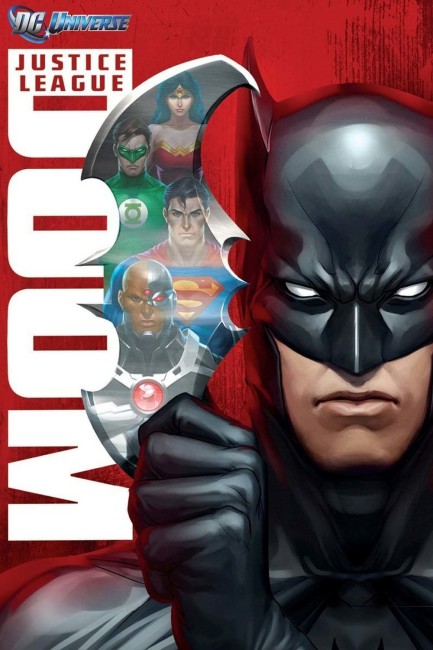 The Justice League foils the attempts of the Royal Flush Gang to rob a cache of diamonds using advanced inter-dimensional technology. Afterwards, Mirror Master hides aboard the Batmobile and sneaks into the Batcave. There he is able to get into the computer and steal files that Batman keeps on each member of the Justice League. Vandal Savage, a caveman who has remained alive for 50,000 years and is unable to be killed due to the fact that he bathed in the radiation from a fallen meteorite, brings together a group of super-villains – Bane, Metallo, Cheetah, Star Sapphire, Mirror Master and Ma’alefa’ak – who are all regular nemeses of the principal members of the Justice League and asks them to form The League of Doom. He sees that the Justice League stand in the way of his desire to become ruler of the world, which includes a plan to divert a solar storm to strike the Earth and eliminate a third of the world’s population. He offers each member of the League of Doom ten million dollars if they will eliminate their counterpart using knowledge of their individual weaknesses he has obtained from Batman’s files. The League of Doom set out on their mission – where Bane traps Batman by stealing the corpses of Bruce Wayne’s parents and then burying Batman alive; where Metallo lures Superman to a rescue and then shoots him with a kryptonite bullet; where Cheetah gashes Wonder Woman with an hallucinatory drug that causes her to see everybody as Cheetah and her metabolism to overheat with the need to fight them all; where Mirror Master attaches a bomb to The Flash’s wrist that will explode if he stops running; where Star Sapphire plays upon Green Lantern’s guilt over what happened to Carol Ferris, causing him to relinquish his ring; and where Ma’alefa’ak drugs the Martian Manhunter with a chemical that causes his physiology to sweat out burning magnesium.

Justice League: Doom is loosely based on Tower of Babel (2000), a three-story comic-arc by Mark Wade. Although when it comes to the film, the comic’s chief villain R’as al Ghul has been replaced by Vandal Savage and the complement of Justice League has been changed to focus on the most regular (and well-known) members of the Justice League – Batman, Superman, Wonder Woman, Green Lantern, The Flash and J’onn J’onnz, the Martian Manhunter. On the plus side, the film brings back some of the best voice talents from the Bruce W. Timm series and films in the respective roles – Kevin Conroy as Batman, Tim Daly as Superman and Nathan Fillion as Green Lantern. One also compliments Robin Atkin Downes whose Alfred emerges with a witty line in wryly sarcastic understatement.

On the minus side, the continuity between the various Justice League incarnations in the Timm films and tv series is confusing – this version goes with the most famous Hal Jordan incarnation of Green Lantern whereas the tv series had substituted the African-American John Stewart with no explanation of the change, meaning that someone not familiar with the details of the Green Lantern story may be struggling to keep up with this. Equally, the film makes assumptions that we are all familiar with DC continuity and introduces Carol Ferris after she has become Star Sapphire, something that we have never take place in any of the Bruce W. Timm works so far.

Despite enjoying most of the DC Universe Original Animated Films, I ended up disappointed with Justice League: Doom. The disappointment kicks in from the opening scene with the members of the Justice League going up against the Royal Flush Gang. The Royal Flush Gang were originally introduced in Justice League of America back in 1966 and have made various appearances and gone through several different incarnations since. It is hard to think of any super-villain team that looks lamer than ones whose abilities have all been based on playing cards.

There is also the chief nemesis of Vandal Savage. While he has an interesting background – not unakin to the central character in The Man From Earth (2007) reconceived as a supervillain, even though the comic-book Vandal Savage predates that film – he has limited potential ie. the idea of a caveman whose principal super-power is immortality seems just a little lacking. Even the non-super-powered Lex Luthor holds far more stature as a villain. I kind of wish that Justice League: Doom had stayed with Ra’s al Ghul, one of the most mysterious of Batman’s villains whose potential as a character has never been properly explored by any of his sproadic film incarnations.

There is also the script of the film. The original story and (resultingly the film) feels written in a very schematic way. It almost resembles the formula that Aaron Spelling used to demand for every episode of Charlie’s Angels (1977-81) where each of the Angels was required to be in some separate peril throughout the episode – to the extent that each commercial break would end with them in a cliffhanger situation. The film feels like it has a very diagrammatic plot – give each Justice League member a matching super-villain, pair them off, seemingly kill or permanently defeat the superheroes only for the Justice League to rally together, overthrow their apparent defeat and come together against a world-shattering menace – with little that extends beyond that.

Normally, many of the individual superhero dramas raised – Superman shot with a Kryptonite bullet and at death’s door, Green Lantern wracked with guilt and deciding to forsake the ring – would be Big Event issues in any one of the individual character’s comic-books but here are simply dramas of no particular significance. The very lack of import placed on these clearly means that we cannot regard them with the moment that we did say in seeing Superman supposedly killed in Superman: Doomsday.

Also the script is structured in a way that gives little focus to the individual dramas. We see Superman fatally shot, Batman buried alive and Green Lantern forsaking his ring. The drama then cuts back to the League of Doom and gives us no clue what happened to the others – Martian Manhunter who was last seen on fire, the drugged Wonder Woman attacking random people thinking she is fighting dozens of Cheetahs or The Flash running with the bomb attached to his wrist. The lack of outcome given to each of these makes them seem as though the story is not concerned because there is no true peril, only one that has been concocted to create artificial tension.