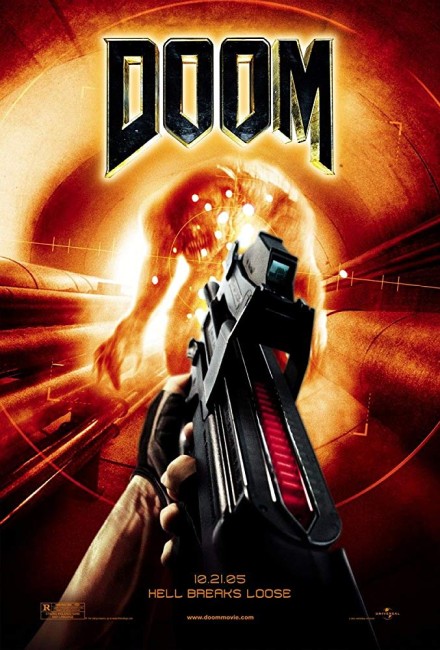 The year 2046. Twenty years earlier, a portal known as The Ark that can teleport people to a long-dead city on Mars was discovered in Nevada. Now the marines from a Rapid Response Tactical Squad are suddenly called into action and teleported through The Ark to the Olduvai Research Facility on Mars after something attacks the scientists there. Among the surviving personnel at the facility is geneticist Samantha Grimm, the sister of one of the soldiers Reaper. As the team go about their mission of retrieving the data from the labs, something starts attacking members of the troupe. After they shoot down the creatures attacking them, they discover that these are members of the research team who have been mutated into monsters. Further investigation shows that the scientists at the facility have been injecting people with a chromosome taken from skeletal remains found at the archaeological dig. The genetic tinkering has caused the dead to be resurrected as fearsome monsters, which are now massacring all on the base.

Doom was one of the most popular modern computer games. The game first appeared in 1993, created by ID Software, and rapidly became a phenomenon that changed the way the industry looked at gaming. Doom had a simple premise – a nameless marine has to move through corridors and tunnels, picking up various weapons along the way and blowing away the soldiers and monsters that he encounters. What revolutionised gaming was Doom‘s use of what became known as The First Person Shooter perspective where the player’s point-of-view was through the eyes of the marine so that what one saw on screen were monsters coming at you and a pair of hands that would wield various weapons. Although it was not the first to do so, Doom had an unprecedented level of interactivity and three-dimensionality in the ability to move through the environment. Initially distributed free, the game took off in a big way and later had five follow-up versions and releases to various platforms, not to mention the fact that it had been designed so that players could create their own add-on modules and it could be played between multiple players online or over a network. The First Person Shooter concept was adopted by many games and soon became an industry standard.

Doom is directed by former cinematographer Andrzej Bartkowiak, who had previously directed several slick but intellectually content free action films with the likes of Romeo Must Die (2000), Exit Wounds (2001) and Cradle 2 the Grave (2003) and a subsequent videogame adaptation with Street Fighter: The Legend of Chun-Li (2009). The script was tuned by Wesley Strick, who has a number of A-list screenplays to his credit including Arachnophobia (1990), Cape Fear (1991), Final Analysis (1992), Wolf (1994), The Saint (1997), The Glass House (2001), the remake of A Nightmare on Elm Street (2010) and Loft (2013), and has also directed the psycho-thriller The Tie That Binds (1995).

Doom is at least what one can say that you expect of a videogame adaptation – a good deal of action and not a huge amount in the way of plot. That said, most fans of the original Doom games – this author included – emerged disappointed. The game consists of no more than an anonymous character running around a labyrinth shooting up various monsters. However, the film seems to fumble this essential concept – it is some 40 minutes in before we even see a monster, for instance. Necessarily, the film has to expend some backstory explaining the set-up but in doing so the entertainingly kinetic violence of the game has been watered down. To his credit, Andrzej Bartkowiak creates some passable suspense during the wandering through the corridors with things jumping out but ultimately does nothing with any of it.

The monsters encountered are particularly unmemorable. One missed many of the game’s regular nemeses and features – particularly the giant flying red fireball-breathing demons. Although, unlike the wimpy Resident Evil, Doom is not stinting when it comes to the considerable level of gore that was present in the original game and was released with an R rating. The film goes some way towards catering to gamer interest by introducing favourites like the BFG (Big Fucking Gun, initially nicknamed the Bio-Force Gun until the more colloquial sobriquet is applied by The Rock). And there is a ten minute sequence near the end where the camera takes on the famous First Person Shooter point-of-view and races along taking on various monsters as a pair of hands in the centre of the frame wield a chaingun and even a chainsaw.

For reasons unknown, the film chooses not to use the game’s explanation that the Martian base sits atop a gateway to Hell and that the creatures encountered are demons and instead substitutes an explanation about genetic experiments and mutated humans – if anything, the film resembles the first Resident Evil movie far more than it does the Doom game. Many gamers saw this as a watering down of the game’s concept, possibly in an effort not to upset Christian morality groups.

The plot, which draws a good deal from the prequel to events we had in Doom 3 (2004), is essentially a reworking of Aliens (1986) – a group of tough marines armed with big guns are sent in to investigate a facility and are massacred by monsters lurking in the darkened corridors, the two-faced company is found to be up to sinister experiments and so on. There are probably other sources that one could cite as well – like Forbidden Planet (1956) and the idea of archaeologists having discovered the remnants of an ancient civilisation and attempting to replicate the dead civilisation’s efforts to expand their mental/physical capacity, only to find that this is what ended up wiping them out and is now something that threatens the humans. Maybe you could also see a passing nod or two of John Carpenter’s Ghosts of Mars (2001) with its troupe of commandos fighting off human dead that have become possessed by resurrected Martian spirits.

The characters are completely one-dimensional. The actors do their best – Karl Urban makes a serviceable effort as the tight-lipped John Grimm, the nameless marine of the game. The best in the cast is Rosamund Pike who comes from a British stage background and made an impressive appearance in the James Bond film Die Another Day (2002). Even she is defeated by the one-dimensionality of the characters – all her role requires her to do is spout techno-babble and wear tops that leave her nipples prominently exposed throughout. Wrestler Dwayne Johnson alias The Rock appears to have taken some more acting lessons since the first lead role that one saw him in – The Scorpion King (2002) – but is hamstrung by hard-to-buy character twists that require him to suddenly out-of-the-blue turn psychotic and then become the nemesis of the show for the climactic showdown.

All in all, Doom is a disappointing adaptation of the game. The film had a foolproof scenario to work with – all it needed to do was to provide lots of violence and shooting – but the filmmakers only seem to come up with a damp squib of a movie that barely even rattles the pulse.

Doom: Annihilation (2019) was a further adaptation of the videogame, although one that throws out any continuity to this film and does a better job of capturing the essence of the game.