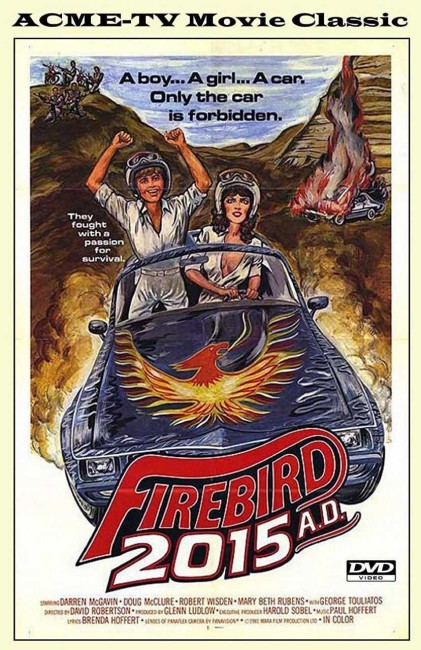 It is the year 2015. The US government has passed a law banning the private use of cars. A police force, The Department of Vehicular Control, has been set up to stop motorists that flaunt the law, who are nicknamed Burners. Red and Indy are two middle-aged Burners who have lovingly restored custom cars and race together in the wide-open country using illegal supplies of gasoline. Red’s son Cam follows him to the place where he hides his beloved Firebird. Red takes Cam for a drive to show him what Burning and the love of a car is all about. Cam befriends and is attracted to Indy’s daughter Jill, another Burner. At the same time, they must also deal with a detachment of DVC’s in the area who are determined to stop the Firebird, as well as one of the DVC contingent who has gone crazy and started killing Burners.

This little-seen Canadian film was made during the midst of the late 1970s/early 1980s Oil Crisis, a period when gasoline prices soared and the public had the overriding belief that there was only a matter of years left before all supplies of oil in the world would be used up. Firebird 2015 AD extends these fears into the fantasy of a Dystopian future where all private usage of gasoline has been outlawed and aging rebels lovingly tend muscle cars in hiding, waiting only for the day when they can take on the nasty government in a foot-to-the-floor race. The scenario in Firebird 2015 AD is very similar to another science-fiction film that came out the same year, the also Canadian-made The Last Chase (1980).

There does seem something wrong with this kind of fantasy. For one, if oil supplies are at an end, as both of these films postulate that they were, does it not make eminent sense for the government to ban private usage of cars in an effort to conserve what is left for important rather than frivolous use? Both of these films are libertarian fantasies, ones that believe in all-important rights and individual freedoms – indeed, Firebird 2015 AD offers a barrage of quotes about freedoms and unjust laws at one point – such as the right to drive a car being far more important than saving resources for the benefit of the many.

In that all the aging car lovers seem to do with their cars is drive around the prairies challenging each other in races of one-upmanship, their desire to exercise their freedom to do so over the general good cannot help but seem an eminently selfish one. You could perhaps compare the oldsters and their desire to exercise their freedom to drive with the real world gun lobby and their insistence on the right to bear arms – the arguments used by both camps are the same ones. Indeed, the gun rights campaigners make a much more coherent argument, while here all that Darren McGavin offers as explanation to son Robert Wisden is “You know – because – ” and then takes him for a ride to prove his point.

Firebird 2015 AD was made just before Mad Max 2 (1981) came out. If it had been made after and had drawn on the tropes and formula that Mad Max created, as many copycats did, it might have been a more interesting film. Although both films feature people driving around a decayed future landscape in cars, Firebird 2015 AD spends all its time watching muscle cars race one another in the middle of nowhere. Firebird feels like a film that has been made by a car aficionado – nothing much happens throughout, just numerous scenes of cars racing around where clearly we are meant to appreciate that in itself. The car races come with a critical lack of dramatic impetus and the film almost seems to be searching for something like Mad Max‘s desert highway chases with mohawked crazies to give it some life.

On the plus side, the romance between Robert Wisden and Mary Beth Rubens, which at one point offers the amusing idea of a driving lesson as a seduction attempt, is the most authentic thing in the film and has a lovely free-spiritedness. Most amusingly dated comment of the film:– Mary Beth Rubens’ description of her job: “I’m a silicon chip engineer – I put together calculators.”

David M. Robertson has only subsequently worked in television. Co-writer Maurice Hurley did go onto become a producer/writer on Star Trek: The Next Generation (1987-94).