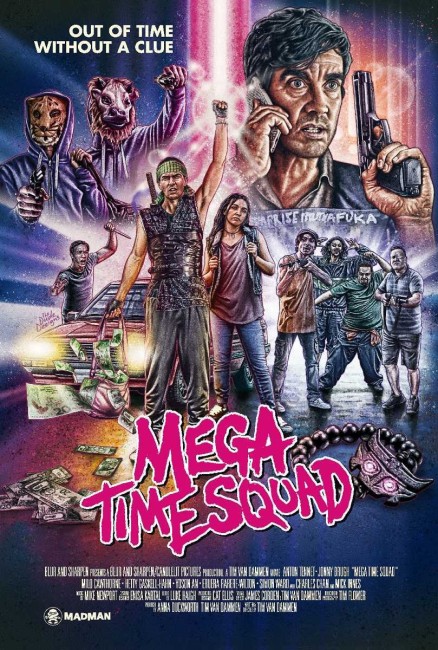 Thames, New Zealand. John works as a collector for the local petty crime kingpin Shelton. One day John and his friend Gaz overhear Shelton planning a raid on the local antique store of Wah Lee where a shipment of Triad crime money is being delivered. John persuades Gaz to rob the store. As they leave, John also takes a bracelet but is warned by Wah Lee that it will bring a devil. What they did is discovered by Shelton who orders John shot. John flees and is startled when another version of himself pops up, telling him to push the button on the bracelet when the right time comes. Moments later, he is attacked by Shelton’s thugs and presses the button and is transported five minutes back in time. John then faces a bewildering array of copies of himself, all travelled back in time. Together they form Mega Time Squad and set out to return the money to the Chinese, all the while avoiding Shelton and his heavies and winning the lovely Kelly.

The premise of Mega Time Squad – “John triggers a temporal dislocator bracelet and goes minutes back in time. The time travels result in new Johns and they form the Mega Time Squad” – did nothing to enthuse me at the outset. It seemed the sort of inane premise that would fill a children’s film – think something down around the level of Time Toys (2016). Despite lack of enthusiasm, I made the effort to sit and watch and have to say I was pleasantly surprised.

The premise of a time traveller surrounded by some dozen or more copies of himself all teaming up to defeat and outwit the bad guy is an off-the-wall one. The only other work that comes anywhere near this is the David Gerrold novel The Man Who Folded Himself (1973), which is filled with a mind-boggling array of temporal duplicates of the hero. Various episodes of tv’s Doctor Who – The Three Doctors (1973), The Five Doctors (1983), The Two Doctors (1986) and Day of the Doctor (2013) – have The Doctor meet up with himself but these are played by different actors and quite different to the central premise here that has a dozen or so duplicates of the same actor. Predestination (2014) does some clever things with the idea but each of the temporal copies are very different characters. Not long after this, there was James vs. His Future Self (2019) in which a scientist is visited by an older version of himself come to prevent him from discovering time travel. Maybe the nearest you could come would be the cloning comedy Multiplicity (1996), which featured multiple copies of Michael Keaton running around.

Mega Time Squad also comes at complete contrast to other time travel films like Timecrimes (2007), The Infinite Man (2014), Predestination and Black Hollow Cage (2017). Whereas these are serious time paradox films that have their protagonists surrounded by copies of themselves at different points in the timeline, Mega Time Squad has no real pretensions it is telling a conceptual story and is just a fun film about the comic capers of a guy and multiple copies of himself.

This is a film that takes you aback with its Kiwi humour. Unless you are familiar with it, the array of colloquialisms and insults thrown around is bewildering – variously people are called ‘woofters’, ‘wankers’, ‘mongrels’ or we get phrases like “you want a bash?” (a threat to punch someone), “let’s go for a hoon” (driving one’s car fast/recklessly), “I’m going to take a slash” (to go and urinate), “I’m not going to go crook on you” (lose one’s temper) and “they taken you to the piss chuggers yet?” (referring the local bar). I am not a huge fan of the type of humour that requires all the characters in a story to be idiots and Mega Time Squad is dependent on this to the extent that every single character in the film with the exception of bad guy Jonny Brugh and love interest Hetty Gaskell-Hahn seem to be idiots.

The characters switch off but there comes a sudden point not too far into the film when Mega Time Squad suddenly gets to be fun. This is about the point where Anton Tennet is fleeing the thugs and encounters a copy of himself who pops up to offer advice about using the bracelet and then a series of successive twists where other copies of Anton keep popping up to the point we are watching one version of Anton watching another version of Anton watch himself encounter his other self giving himself the initial advice.

The film’s parodies of action movie moves also holds some amusement. The funniest section is when the Antons get their hands on the money only for the primary Anton to tell Hetty Gaskell-Hahn to watch it because he doesn’t trust one of his other selves not to steal it, resulting in a comic caper with multiple Antons running around a motel trying to steal the money from the others. Or when two of the selves end up arguing over each calling Hetty his girlfriend and she is not sure which one it is that she just slept with. The effects that allow multiple version of Anton Tennet to run around and interact are very accomplished.