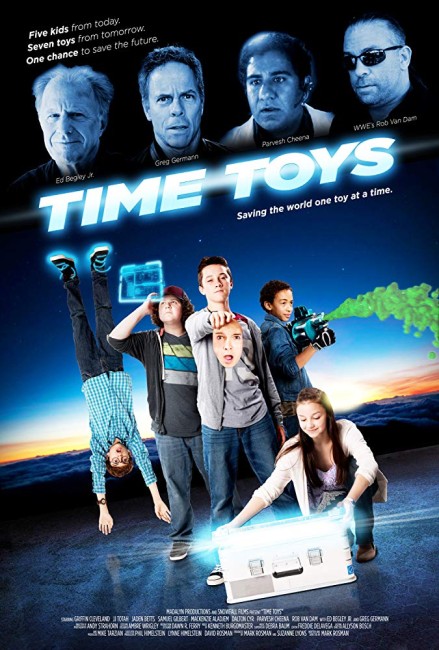 Billy Weller, the head of the powerful Xircon Industries, has perfected a process that allows him to scoop up objects from twenty-five years in the future. They bring a box of items back through the time warp but the coordinates are off and the box arrives elsewhere. In Santa Clarita, four nerdish friends who have been nicknamed The Zeros by bullies, are heading to their cabin in the woods when they find the box buried in the middle of a creek. Inside they find toys with amazing powers – sneakers that will allow them to move at super-speed, gloves that provide great strength and dexterity, a mask that changes the wearer’s likeness into that of the last person they look at, a cap that turns one’s brain into a super-computer, a gun that shoots various substances. Also in the crate is a ball that accesses Holopedia, the world’s database of information, and allows them to realise that the toys come from the future. As they discover the powers that the toys allow them, they must also deal with Weller’s henchmen coming after them to recapture the items and the warnings of an eccentric homeless man that Weller is trying to get his hands on an all-powerful weapon.

I was attracted by the premise for Time Toys – I felt like it had the potential to be a reasonable film, perhaps something along the lines of what The Last Mimzy (2007) could have been. The idea has great possibility – kids receive toys from the future that have world-destroying potential while the kids can only see their playful possibilities as they try to avoid adults come trying to get them back.

Well that is the pitch. The reality emerges a long way away from that. Time Toys feels exactly like a film that was made for the Disney Channel – where anything conceptually challenging has been watered down to an anodyne blandness. What we get feels like little more than a wannabe superhero fantasy – kids get super-speed sneakers, gloves that allow super-strength and agility, a facemask that can take on the features of anyone the wearer is looking at, a cap that turns one kid’s brain into a super-computer, a gun that shoots various substances.

The film has very low conceptual horizons (and equally low budget) – the first thing the kids think to do with their new toys is humiliate their bullies in a game of basketball. Very little imagination has gone into the toys. It seems laughable when the toys are described as having world-destroying potential and yet in the vehicular chase sequence we get, J.J. Totah discovers that there is a maximum speed limit he can attain using his sneakers to pedal his bicycle and this is slower than the pursuing car. Meanwhile, Griffin Cleveland struggles to fire at their pursuers with the gun but they simply avoid the oil and wipe the crazy foam off the windscreen and he is not able to defeat them until he reconfigures the gun to shoot shit.

You are straining throughout the scene to think “These toys are supposed to have world-destroying potential?” Things perk up somewhat with the introduction of Greg Germann who determines to go for broke in the villainy department and owns the show amid some mildly adept skulking and plotting around by the kids in the latter scenes.

Director Mark Rosman has a surprising number of genre associations. He started out as a director with the slasher movie The House on Sorority Row (1983) and went on to make the genre likes of the children’s time travel tv movie The Blue Yonder (1985); The Force (1994) about a disembodied soul; the killer robot film Evolver (1995); the alien impregnation film The Invader (1997); Life-Size (tv movie, 2000) where Lindsay Lohan brings one of her dolls to life, the modernised fairytale A Cinderella Story (2004); the Christmas fantasy Snow 2: Brain Freeze (2008); as well as produced the modern slasher film Sorority Row (2009).