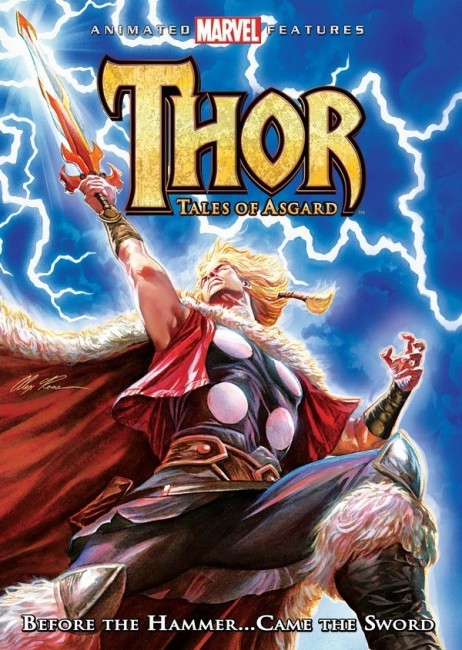 In Asgard, the teenage Thor is taunted by Sif that he is allowed to win all the combat tournaments because he is the Odin’s son. Irritated by this, Thor determines to prove himself. He persuades Loki to join him and they sneak out of the palace and stow aboard the ship of the Warriors Three, three legendary fighters who are always telling of their great exploits, as they set off on their annual sojourn to Jottelheim to battle the Ice Giants. Arriving, they instead find that the Warriors Three’s fabled exploits extend no further than spending the time drinking at an outpost bar. Thor inadvertently causes the bar to erupt into a brawl. Fleeing, Thor insists they sail on to Jottelheim. There he discovers the legendary Sword of Surtur that holds immense power. In wielding it against an Ice Giant attack, Thor discovers that it is capable of unleashing massive destruction. Fleeing across Jottelheim, trying to return home, Thor discovers his rash actions have brought the Ice Giants to war with Asgard, while various parties seek to obtain the sword for their own ends.

Outside of Christopher Nolan’s Batman films, DC Comics has failed to share that success up until the late 2010s. On the other hand, things have been reversed when it comes to matters of animation. DC have enjoyed huge success with animated adaptations of their superheroes under the aegis of producer Bruce Timm with the likes of the tv series’ Batman (1992-4), Superman (1996-2000) and Justice League/Justice League Unlimited (2001-6) and during the 00s a prolific number of standalone films mostly based on popular graphic novels.

Thor: Tales of Asgard is one of these animated films and was released two weeks after the first live-action Thor (2011) film directed by Kenneth Branagh with Chris Hemsworth in the title role. Tales of Asgard was clearly intended as a prequel of sorts to Thor being set during Thor’s early years in Asgard when Loki was not yet a villain and Thor was still a teenager. It comes as somewhat of a jolt going from Thor (and The Avengers) and Chris Hemsworth’s adult interpretation of Thor to seeing the character incarnated as a petulant teenager here (even if the story arc does eventually allow him the opportunity to grow up). This perhaps says something about how Marvel Comics view the demographic for these animated adaptations. Moreover, the way Thor is depicted, outfitted with a giant set of leggings, makes him look more like one of the heroes from a traditional 1970s anime who were frequently drawn as being three-quarters legs.

The quality of the animation is competent if unexceptional. Disappointingly, the employment of Sam Liu has failed to replicate the amazing action scenes that the Bruce Timm animated films feature. There are times it feels like the animation has been shipped out and those involved in the production didn’t care. Thor: Tales of Asgard fares somewhat better in the script department where the story has a decent arc – you could easily see Thor’s growing up, learning responsibility for his hubris in taking a mighty sword of power and the epic journey across an alien land that he and companions must undergo making for a decent live-action superhero film. At least, the animation team gets it together for a moderately epic-sized battle between forces at the end.