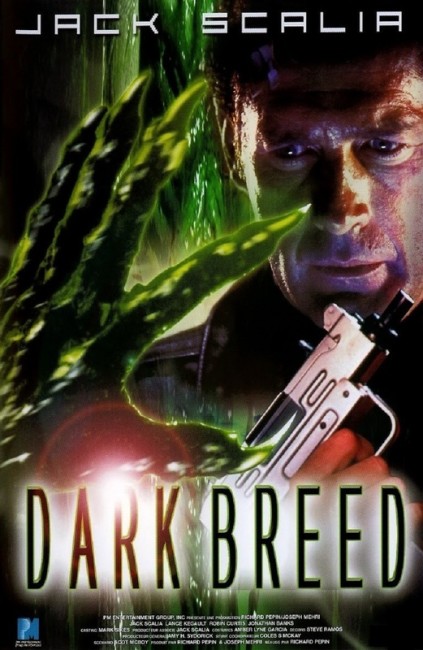 The space shuttle Aquarius 2 crashes in a city harbour. A rescue team from the Omega Project commanded by Captain Nicholas Saxon quickly arrive. Malcolm Cutter, the head of Omega Project, then announces that all aboard the shuttle, including Saxon’s ex-wife Deborah, are dead. However, the astronauts, led by Commander Joseph Shay, surface from the wreckage and make an escape following a massive armed pursuit. As Cutter’s men try to capture them, Saxon receives a visit from his ex-wife who tells him that the other crew have been possessed by aliens known as The Dark Breed. She is now inhabited by a rival alien known as Sabidah who asks his help in stopping the Dark Breed.

Around the same time that Richard Pepin made Dark Breed, he also made The Silencers (1996) – though Dark Breed has the earlier copyright date, it appears to have not had a US video release until several months after The Silencers. One might describe The Silencers as being The X Files (1993-2002, 2016-8) conflated into an action movie. Dark Breed uses almost exactly the same plot as The Silencers – both films feature Jack Scalia caught up in a battle between good and evil invading aliens and forces of government conspiracy with he being joined in the fight by one good alien come to help stop the invasion. The Silencers was a routine film but Dark Breed is far less so.

Here Pepin fails to keep the various elements of conspiring government forces, evil aliens, good aliens, possessed people and heroes up in the air in a coherent way. These conflicting elements create frequent confusion. Added to this, Pepin is not particularly interested in plot. His primary and almost entire interest in a film is the action element and his plots are only regarded as filler to hold the action sequences together.

These action scenes tend to completely dominate his films – case in point here being where the film launches in first with the crash of the shuttle, followed by the astronauts emerging from the harbour and commandeering a military van in an explosive high-speed chase, its destruction, followed by their causing a semi-trailer to jacknife on the highway, their taking the truck, Jack Scalia boarding from a helicopter and a fight in and around the house on the back of the truck before a car spectacularly crashes through the house – some 10-15 minutes of action before Pepin ever slows down to put us in the picture about what is happening.