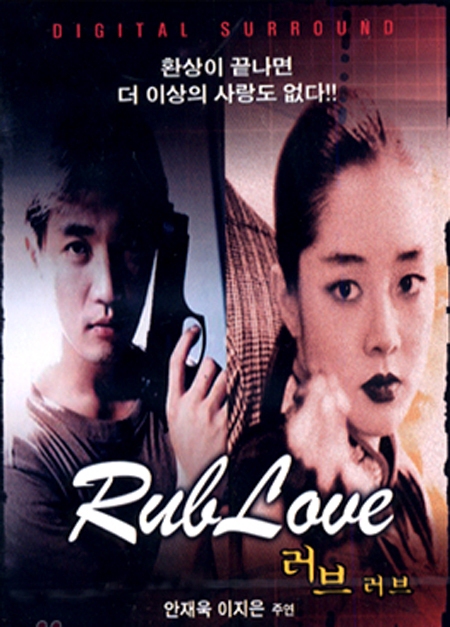 In Seoul of 2028, the comic-book artist Han Cho falls for his neighbour Nana, realising that she is the perfect woman he has been trying to conceive for his latest work. However, she is a hit-person. He walks in just as she has completed two kills but is undeterred and professes his love for her, much to her indifference. He follows her through her next kill, a suicidal American black marketeer who has ordered a contract taken out on himself. Among the dead man’s things, Han Cho finds an amnesia-inducing drug. He slips this into Nana’s drink, blanking out her memory and then afterwards telling her that she is his girlfriend.

Rub Love was the debut feature of 23-year-old South Korean woman director Lee Suh-Goon. Lee wrote the screenplay for the acclaimed 301, 302 (1995) and impressed 301, 302 director Park Chul-Soo sufficiently that he backed her solo writing-directing debut here. Rub Love, according to Lee, was not a success in Korea, largely due to audiences regarding it as too Western a film. It is an interesting film, even if it does not fully succeed. She later went on to direct The Recipe (2010) about the quest for a soup that has strange powers.

What Lee Suh-Goon does not lack is an assuredness of style. With more than ample confidence, she deploys the stylistics of the Hong Kong action genre – stylised slow-motion action, chic violence, an air of nonchalant cool, even effects like split-screen and anamorphic squeeze frame.

There is a fine undertow of black comedy in the early parts – like where hero Lee Ji-Eun bursts in to declare his love for Ahn Jae-Wook just after she has conducted a hit, delivering his proclamations seemingly unconcerned about two dead bodies in the room; or the scenes (which go on far too long) with black marketeer Joshua Klausner hiring her to kill himself and then trying to rehearse a suitable set up for the killing.

Unfortunately, the film lacks any real plot to speak of. The abovementioned scenes feel like disconnected incidents. The stylishness of Lee Suh-Goon’s direction and the quirkiness of her humour keeps the film going for a time but it is not until we get to the administering of the drug in the latter half that we gain any idea as to where the film is going. There is one scene where people previously killed turn up for a shootout at a merry-go-round that is confusing and it is only later apparent that this is a fantasy of Lee Ji-Eun’s as he writes an alternate ending for his comic-book.

There is an effective ending with the heroine sitting on a bus stop with her memory blanked out as Lee Ji-Eun’s body is taken away, unaware of who he is. However, the rest of the film has an irritating looseness to it. You cannot help but feel that a Western version of the film, while it would have been made as a post-Tarantino underworld cool film, could have used the same basic plot but made a far tighter and more exciting film out of it simply by adhering more closely to generic formula.