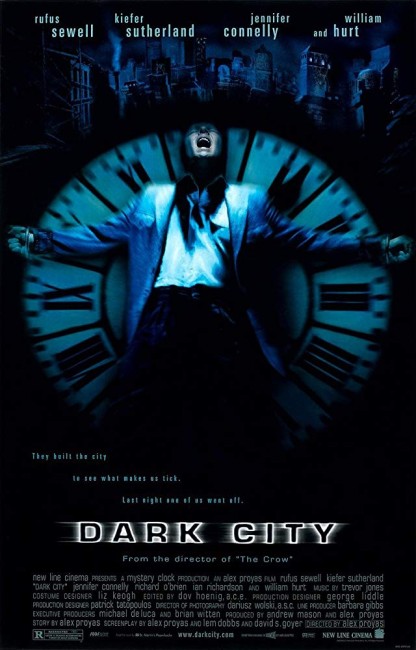 In a mysterious city where the sun never shines, John Murdoch wakes in a hotel room with no memory of who he is. He is pursued by the police who suspect that he is responsible for killing a series of prostitutes; a creepy doctor who insists that he is insane; and mysterious aliens in black coats and fedoras who place the entire city to sleep on the stroke of midnight every night while they manipulate its fundamental structure. Murdoch finds that he is the only person who cannot be made to sleep by the aliens and that he shares some of their reality-manipulating abilities. In his efforts to understand the situation, Murdoch discovers that the city is a vast laboratory being used in experiments by the aliens in order to rearrange and transplant people’s memories in an attempt to penetrate the secrets of the human soul.

Forget what a number of the trained-monkey mainstream reviewers said at the time about Dark City being confusing and hard to follow. I can say without any hesitation that Dark City is one of the most conceptually audacious and best science-fiction films I have seen in the last few years. Indeed, Dark City would have to be my single favourite science-fiction film of the 1990s.

Dark City was the third film of Alex Proyas. Though born in Egypt, Alex Proyas was raised in Australia. He started out as a music video director and then made his cinematic directorial debut with the obscure post-holocaust film Spirits of the Air, Gremlins of the Clouds (1987), before catching considerable attention with the darkly driven The Crow (1994). Subsequent to Dark City, Alex Proyas would make other genre films such as the Isaac Asimov adaptation I, Robot (2004), Knowing (2009) about the opening of a time capsule that contain predictions of the future, and Gods of Egypt (2016).

Co-writer Lem Dobbs has also collaborated with Steven Soderbergh on the likes of Kafka (1991) and The Limey (1999), as well as written the interesting little psycho film Hider in the House (1989).

Dark City is a film that eludes any easy pigeonholing. It seemingly takes place in a world of self-conscious artifice that suggests a collision between Brazil (1985) and The Maltese Falcon (1941). Here Alex Proyas deliberately evokes film noir – everyone is dressed in trench coats and fedoras, the women come across as slinky vamps, the cars are period and the technology has a striking 1940s retro look. There is also a dystopian feel to the film – there are times this retro world seems extraordinarily threatening – a visit to a cafe where each item of food sits in a compartment of its own in a backlit glass case called only by its generic name (carrots, green jelly) is striking. Alex Proyas shoots in a virtually monochrome lighting scheme that renders the city as permanent nighttime. His invocations of film noir and the faded sepia-tone look have a haunting sentimentality – one where the recurrent vision of a sunlit, palm-shaded beach (even when it is revealed as only a faded mural) becomes an achingly palpable representation of all hope.

Of course, in this noir world, everything is far from normal. In an almost classical set-up, Rufus Sewell’s hero wakes in a hotel room with complete amnesia only to then find himself on the run from the police as a suspected killer. In the first of Dark City‘s wild spins, he then finds that he is immune to (and maybe even one of) a group of bald aliens beneath the city who cause the populace to fall asleep on the stroke of midnight each night while they rearrange the spatial geometry and the very fabric of reality within the city. [SPOILER ALERTS]. After several wild (but completely logical) twists, the hero makes a classical conceptual breakthrough to discover that the city is an experiment set up by the aliens to determine the nature of the human soul by manipulating and transplanting people’s memories. The sequence with the Tuning of the city with buildings morphing into different formations and especially a scene where a couple’s shabby working class apartment is expanded until it becomes a lavish upper-class dining room replete with chandeliers and a lengthy dining table and they wake up to continue their conversation as though nothing had happened is extraordinary.

Dark City is filled with beautiful mind-bending touches – like where Rufus Sewell meets the hotel clerk who is now a newsagent and insists that he has been at the same job for twenty-five years. One of the most emotionally powerful scenes comes when Rufus Sewell tries to explain to wife Jennifer Connelly that the memories of their marriage are entirely false and were only implanted the previous night, only to have her tearfully protest “But they can’t be – I love you.” The scenes where the protagonists go on their quest for the mythic Shell Beach and break through the wall to find a sea of stars and William Hurt’s vision as he falls up into space, looking down on the city like an island floating in space, are stunning moments of conceptual breakthrough.

You could perhaps draw similarities between Dark City and Solaris (1972) – both are films that feature protagonists trapped inside baffling simulations of memory. Both films could also be mirror opposites of one another – where Solaris states that memories are the only real things that exist and the film’s protagonists are baffled at confronting them brought to life, Dark City sees memories themselves as impermanent and unreliable simulations. Notedly, Dark City takes place in a world where the memories that the characters are on the verge of remembering are drawn out of a cinematic past. In both cases though, the two films ache with the sense of the protagonist’s attempting to hold onto something tangibly real amidst the labyrinth of simulation. When Dark City came out, most audiences and critics could not keep up with the dazzling array of ideas that Alex Proyas, David S. Goyer and Lem Dobbs put them through and the film was not a success. It is however an extraordinary film.

Of course, the very next year The Wachowskis came out with The Matrix (1999), which proved an amazing phenomenon. There is an amazing number of confluences between Dark City and The Matrix – both feature a hero who discovers that what he has perceived to be reality is in fact a sinister simulation and that he also has remarkable abilities to manipulate the illusion; both films feature shadowy villains in black; and both feature the same gloomy, subterranean look.