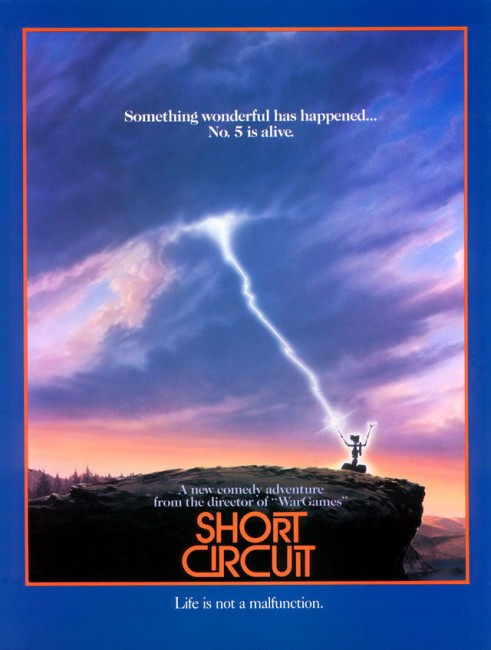 At Nova Robotics, six new, self-sufficient SAINT military robots, built with highly dexterous limbs, wheels and high-powered laser units are premiered before the assembled brass. Following the demonstration, a freak lightning bolt hits the No. 5 robot, sending it into disarray. It accidentally escapes the institute, whereupon it becomes the target of a massive hunt by the paranoid military. Falling in with ice-cream vendor Stephanie Speck and her menagerie of homeless animals, No. 5 becomes filled with an eager desire to consume as much data input as it can. When its creator Newton Crosby catches up with it, Newton realises that the lightning bolt has caused No. 5 to become self-aware. Newton and Stephanie become engaged in a battle to protect No. 5’s uniqueness from the military that only want to recapture and dismantle it.

George Lucas has much to answer for for his anthropomorphism of the robot in Star Wars (1977). In Star Wars, the playing of R2D2 and C3PO as a robotic equivalent of a Laurel and Hardy had a joyful freshness to it. Even Doctor Who (1963-89)’s robot dog K-9, which appeared soon after, and the robot romance in Heartbeeps (1981) had their moments. However, there was also Short Circuit, which seems like E.T.– The Extra-Terrestrial (1982) with diodes. When John Badham and co give us robots as stand-up comics here, you feel that the joke has reached a point of overkill.

It is not that Short Circuit is a bad film – it offers up a virtuoso display of cybernetics that is remarkably agile – it’s just that it can only be enjoyed as mindless popcorn. The film is cute, it gets laughs from its audiences and it warms the heart in a mild way – but its’ sum total as science-fiction is akin to biting into candyfloss expecting a four-course meal. Everything in the film is only there to be thrown away for a gag – case in point: No. 5 sees Ally Sheedy in the bath and is considered to comment in its irritably squawky way, “Nice software.” It gets a great cheap laugh but when one considers how such a scene is expecting a computer to make not only a value judgment but also a non-sequitur leap between human biology and a computer program, any credibility goes out the window.

Similarly, having a robot go “whee” as it falls off a bridge is cute, but child-like enthusiasm is something that robots are just not programmed for. With later scenes involving robots conducting Three Stooges imitations or parroting John Travolta and the famous Stayin’ Alive disco number from John Badham’s Saturday Night Fever (1977), the film’s credibility well and truly dies. The script treads in clichés – the ruthless military that want the creature for not-very-clearly-defined purposes, an E.T.-like return from the dead and a forced happy ending.

Short Circuit was the third in a trilogy of science-fiction films made by director John Badham. Badham had previously made the much more seriously minded action film Blue Thunder (1983) about the theft of a hi-tech helicopter and WarGames (1983) about a teen hacker accidentally triggering a NORAD A.I. into starting a World War III simulation. All three films have similar themes of technology originally designed for military purpose either becoming self-aware of being co-opted towards exposing the militaristic mindset. Within the genre, John Badham also made the lushly romantic Frank Langella version of Dracula (1979). He has since abandoned science-fiction and mostly makes light comedies such as Stakeout (1987), Bird on a Wire (1991) and The Hard Way (1991) and several unsuccessful action films/thrillers such as Point of No Return/The Assassin (1993), Drop Zone (1994) and Nick of Time (1995). From the 00s, Badham has only been working in tv.

There was a nauseating sequel, Short Circuit 2 (1988) where the only returnee was Fisher Stevens. A remake has been touted for the 2010s.

Short Circuit was the screenwriting debut of team S.S. Wilson and Brent Maddock. The two would go onto write a number of other genre films including the cute UFO film Batteries Not Included (1987), the monster movie Tremors (1990), the Bill Cosby vehicle Ghost Dad (1990), the afterlife fantasy Heart and Souls (1993) and the remake of Wild Wild West (1999). S.S. Wilson made his debut as director on the Tremors sequel Tremors II: Aftershocks (1996) and went on to direct Tremors 4: The Legend Begins (2004), while Brent Maddock made his debut on Tremors 3: Back to Perfection (2001).