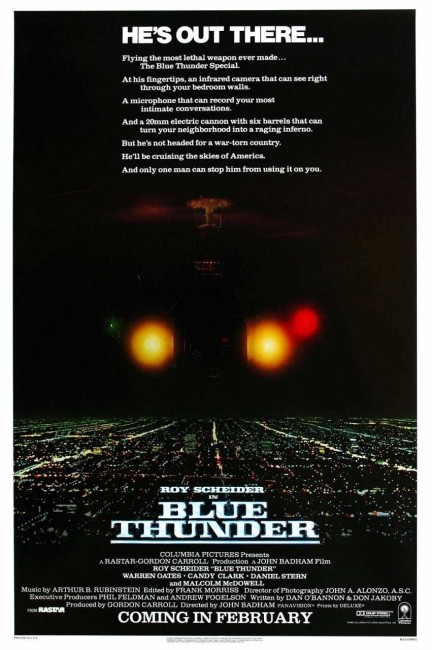 The success of Alien (1979) propelled screenwriter Dan O’Bannon to the forefront of public attention. O’Bannon would become a genre specialist and go on to deliver a series of solid, hard-hitting scripts with the genre. Blue Thunder was one of the first scripts that O’Bannon delivered subsequent to the success of Alien.

The director assigned to Blue Thunder was John Badham. John Badham was a tv director who had an enormous hit with Saturday Night Fever (1977), the film that became the defining anthem of the disco era. Badham has dabbled in genre material several times – the tv movie psycho-thriller Reflections of Murder (1974), the big-budget remake of Dracula (1979) with Frank Langella; the teen hacker thriller WarGames (1983), delivered the same year as Blue Thunder; and the insipid cute robot entry Short Circuit (1986)..

Since the mid 1980s, John Badham left genre material behind to make various action films – Point of No Return/The Assassin (1993), Drop Zone (1994), Nick of Time (1995) – or blends of action and light comedy – Stakeout (1987), Bird on a Wire (1990) and The Hard Way (1991) – all of which have a tendency to disappear into a packaged blandness. From the 00s, Badham has disappeared from theatrical directing and to all intents has retired.

Blue Thunder was John Badham’s best action film, although Dan O’Bannon was vocally unhappy at the way Badham dumbed down his script. The more serious elements – such as O’Bannon originally intending Murphy to be a Vietnam veteran – and the political ramifications have been junked in favour of bulleting action. That said, Badham drives the film with a solid and gritty punch. The scenes with the helicopter demonstrating its capabilities and in action are well achieved and the night time sequences with the copter silently spying on nude aerobicists and office windows take on a shadowy excitement.

Badham displays his true intent – of creating some airborne equivalent of Mad Max 2 (1981) – at the climax, which becomes an exciting all-out aerial chase through the downtown skies of L.A.. Here the bravura of the stunt people takes over from the story and characters altogether – an ordinary housewife improbably becomes a high-speed stunt-driver and fighter planes start shooting over downtown LA without seeming causing any loss of human life. One cannot deny that the film proves an exhilarating ride.

The casting is great too. Roy Scheider plays his patentedly familiar, Everyman persona with effortlessly likeable ease and is ably supported on the villain side by Malcolm McDowell as the prissy Cochrane. As the craggy police captain Braddock, Warren Oates gives his last performance and gets all of Dan O’Bannon’s best customarily caustic one-liners – “When you’re walking on eggshells don’t try to hop” and “Son you’ve got a right to be stupid – don’t abuse the privilege.”

The following year the film was spun-off as Blue Thunder (1993), an awful tv series with James Farentino in the Roy Scheider role and Dana Carvey – later of Wayne’s World (1992) fame – as the sidekick. The great irony of the series was that it turned the Blue Thunder into a vehicle for standard tv cop show escapades and in so doing ended up extolling the exact type of fascistic police enforcement overkill that the film condemns. The series only lasted eleven episodes. The tv series Airwolf (1984-5) – see the film Airwolf (1985) – was a marginally better attempt to copy the concept for television.

Screenwriter Dan O’Bannon also worked on Dark Star (1974) and the huge hit of Alien (1979). He subsequently turned in a series of excellent, cynical hard-edge genre scripts such as the zombie film Dead & Buried (1981), episodes of the adult animation anthology Heavy Metal (1981), Tobe Hooper’s soul-sucking alien vampire film Lifeforce (1985) and remake of Invaders from Mars (1986), the Philip K. Dick adaptations Total Recall (1990) and Screamers (1995), and the Canadian horror film Hemoglobin/Bleeders (1997), as well as directing the zombie black comedy Return of the Living Dead (1985) and the H.P. Lovecraft adaptation The Resurrected (1992). Jodorowsky’s Dune (2013) details O’Bannon’s work as special effects director on Alejandro Jodorowsky’s failed adaptation of Dune (1965) in the 1970s.