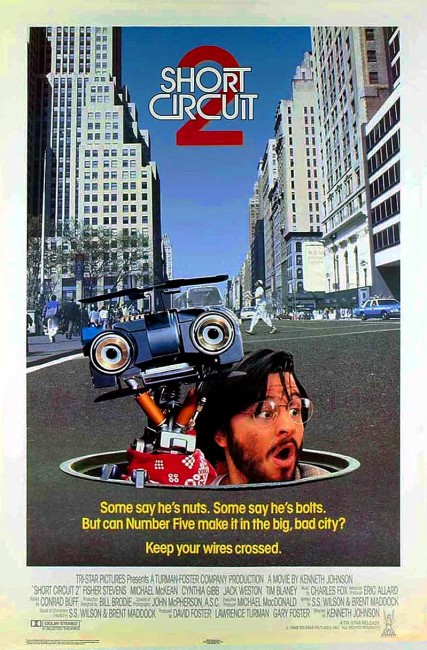 Ben Jahvri is now living in New York, selling miniature toy versions of No 5 on the street. Assistant salesperson Sandy Benatoni offers to buy a thousand of the toys for a department store chain but Ben is unprepared for manufacturing on such a scale. Hearing of his dilemma, Newton Crosbie sends the real No 5 to help Ben meet his deadline. No 5 finishes the job in no time at all but problems begin when it gets loose in the city, hungry for input. At the same time, the warehouse that Ben rents happens to be directly above a tunnel that a gang of thieves are digging under the street into a bank vault and Ben is disrupting their plans. And so they come, determined to put him and No 5 out of operation.

Short Circuit (1986) was intended as an E.T. – The Extra-Terrestrial (1982) with diodes. It was however a reasonably successful hit and so the same writers and producers then returned with this sequel. This time original director John Badham had departed and the director’s chores had been handed over to Kenneth Johnson.

Kenneth Johnson was a producer who had done much in the way of genre work – as writer and producer of tv’s The Six Million Dollar Man (1973-8), The Incredible Hulk (1977-81) – including directing-producing-writing the cinematically-released pilot film The Incredible Hulk (1977) – as director-writer-producer of V (1983), and later the Alien Nation (1989-90) tv series, and as director of all the various Alien Nation tv movie sequels in the 1990s.

Kenneth Johnson is, to this author’s mind, guilty of far more heinous crimes against the genre than Irwin Allen ever was. While at least Allen has colourful schlock appeal amid a deadening pedestrianness and bad science, Johnson merely misses the schlock and adds a shrill, clichéd moral righteousness or an appallingly cute mawkishness. Short Circuit 2 was Kenneth Johnson’s first film designed direct for theatrical release – his only other cinematic film was the ill-fated comic-book superhero adaptation Steel (1997).

Short Circuit had a certain no-brain good-naturedness to it but by the time of this sequel, the cutsie robot and its smart-ass colloquialisms have become utterly nauseating. The film plummets to the depths in scenes with the robot Tarzan swinging on the end of a crane while squawking “I’m really pissed off” in its child’s voice, or twirling crooks at arm’s length going “whee”. It tries to get tough and we see it dressed up as a punk in bandoliers and mohawk or in war paint like a street gang member. In other scenes, Johnson has the robot fall from a skyscraper window and sprout a convenient hang-glider James Bond-style to make it to safety. Listening to the constant barrage of smartass colloquialisms all delivered in a child’s voice become so annoying one wishes they could put an axe through the damn robot.

The sequences that Johnson keeps setting up are ludicrous – there is one where No 5 tries to aid Fisher Stevens as he goes on a date by feeding romantic lines to him via a street sign that is as laughable as it sounds. It gets even worse – like the car chase with clues being given out with tv theme songs played on a musical calculator, which reaches some new kind of low in terms of lamebrained sequences in a film.

The cutsie anthropomorphism, where ultimately whatever appeal the film holds derives from, is taken to ridiculous extremes – having the robot bleeding to death and a pseudo-dramatic attempts to bandage it up and use a fibrillator. (The anthropomorphism of such a scene is technologically ludicrous – haven’t these robot designers ever heard of memory backup? – while surely any damaged electronic parts could simply be replaced). Logic is conveniently ignored in what the robot can and cannot do in terms of its design – having it ascend trees, go down sewers and be able to reel a taxi in with a magnetic grapple despite it having no point of fixed stability.

In having No 5 squawkingly cracking jokes such as “My cousin was a Harley Davidson,” one sees that Kenneth Johnson’s outlook is not merely a pandering to a juvenile audience but actually a cynical contempt for it. I find it hard to describe how much I hated Short Circuit 2.