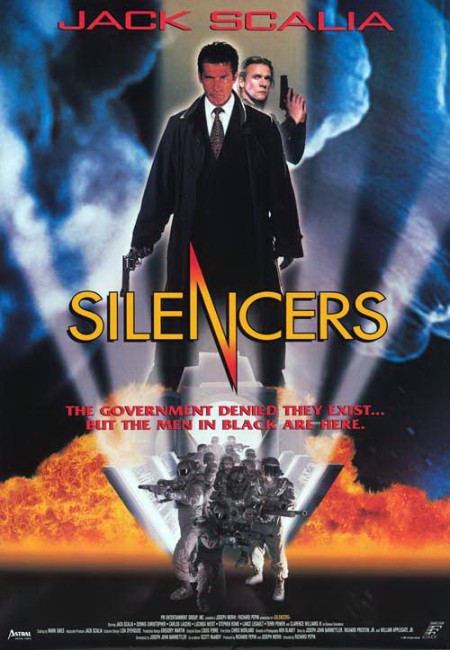 Secret Service agent Chuck Rafferty has been assigned as bodyguard to Senator Rawlings. Rafferty tries to protect the Senator as the Men in Black attempt to assassinate him. Rafferty engages in a furious chase with the Men in Black but is unsuccessful in preventing them from killing the senator. With the senator’s death, one of the Men in Black is appointed as head of the Senate Appropriations Committee. He gives approval to fund Operation Space-Time, which has been set up ostensibly to research energy technology given in a deal with aliens 29 years ago. However, the real purpose behind this is to build a teleport gateway that will allow the Men in Black’s people The Marcabians to invade the Earth. As the gateway is activated, an alien comes through but is captured. Rafferty is transferred to a black ops assignment where he is appointed to guard a tanker that is being used to transport the captured alien. He comes up against the Men in Black again as they attempt to raid the tanker. He receives surprise aid from the captured alien Comdor, who is an agent of the Pleidian Association of Worlds and has come through the gateway to stop the Marcabian invasion force. Together the two of them attempt to fight off the Men in Black and close the portal.

The Silencers – not related to or to be confused with the Dean Martin spy film The Silencers (1966) – is one of the films from the prolific Richard Pepin. Throughout the 1990s and to a slightly quieter extent in the 00s, Richard Pepin has established himself as a director and producer of low-budget action/science-fiction hybrids with the likes of Cyber Tracker (1994), Dark Breed (1995), Hologram Man (1995), The Sender (1997) and others. (See below for a full list of Richard Pepin’s films).

The Silencers was made when tv’s The X Files (1993-2002, 2016-8) was at the height of its popularity. In fact, The Silencers introduces the Men in Black in what would be their first big screen appearance the better part of a year before the hit film of the same name Men in Black (1997) came out. That said, The Silencers is not a particularly good variation on the theme. It seems unsure what type of film it wants to be. It starts out building up the conspiracy/alien infiltration angle and does a passable job of such (even if by the point the film was made, the alien cover-up conspiracy was rapidly becoming a cliche).

Grafted onto the X Files type plot is the seeming necessity to create an action movie. Every so often (almost at timed intervals), Richard Pepin sees the need to throw in a mindless action set-piece. There is at least one adrenalin-charged action sequence with a truck driving through traffic the wrong way on a freeway with Jack Scalia having to board it on the outside and a car crashing through a helicopter in mid-air, which at the same time as you are noting just how mindless it is, you cannot deny is not spectacular.

Unfortunately, after that point, The Silencers nosedives and turns into yet another sf/action buddy cop film along the lines of films like The Hidden (1987) and its spate of imitators such as the tv mini-series Something is Out There (1988), Dark Angel/I Come in Peace (1990), Abraxas: Guardian of the Universe (1991) and The Cat (1992) with Jack Scalia paired up with bland alien surfer-type Dennis Christopher. All of the film’s potential conspiratorial mysteriousness vanishes and is replaced by unfunny buddy humour.

The Silencers is a film that is bizarrely all over the place. The most absurd moment is surely when good guy alien Dennis Christopher tries to deliver a heartfelt plea against war toys, to say that there is more to life than that including art and poetry. Something inside one goes “whoa” and suddenly realises that in an absurdly hypocritical move, the film by its very nature seems to be upholding a message, if not in favour of violence, then at least one that promotes mindless action for the purpose of adrenal excitement.

Also amusing is the film’s retelling of the Roswell Incident (which we are told was the initial appearance of the Men in Black). The so-called real Roswell Incident was a relatively low-key affair where a weather balloon crashed and was reported as something else in a single newspaper, not something that was a great media event, nor one where witnesses went missing afterwards.