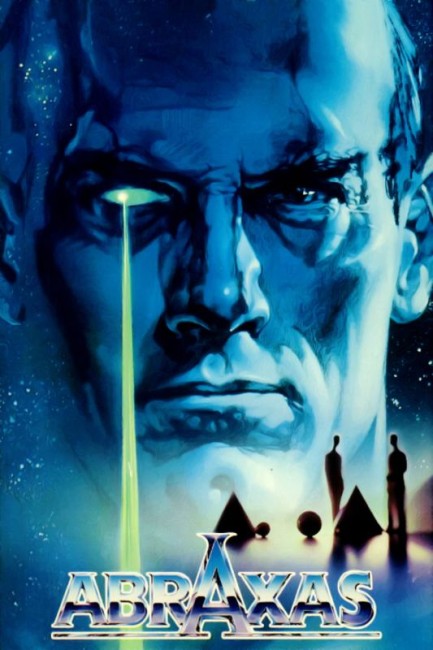 Abraxas is one of the intergalactic law enforcement officers known as Finders. He is sent to Earth to apprehend Secundus, his former partner who has turned renegade. Before he is captured, Secundus succeeds in impregnating Sonia Murray via his hand and moments later she gives birth to a child. Five years later, Secundus escapes prison and comes to Earth in search of the now grown child Tommy. Abraxas is sent in pursuit. Tommy is just starting to discover his vast powers as The Kolmeydor and Secundus desires the secret to the all-powerful anti-life equation that Tommy possesses. However, as Abraxas fights to protect Sonia and Tommy, he starts to discover feelings for her.

Abraxas: Guardian of the Universe was one of a variety of films that came out after the success of The Terminator (1984) that took up the theme of intergalactic cops and criminals fighting on Earth – see also the likes of The Hidden (1987), the tv mini-series Something is Out There (1988), Dark Angel/I Come in Peace (1990) and Peacemaker (1990).

Abraxas is almost a cartoon version of The Terminator. It is superheroics played down at the level of kid’s cartoons. It is cast with former Superstars of Wrestling heavy (and later Minnesota governor) Jesse Ventura and Sven-Ole Thorsen, a stuntman and minor action movie heavy. Ventura plays with a cod-Stallone-esque tight-lipped aggression and does an admirable job of projecting resolutely heroic certainty while keeping a straight face. On the other hand, Sven-Ole Thorsen simply cannot act and his version of a Terminator in plaid shirt and thick Scandinavian accent is frequently laughable.

The film is uncertain whether its tone is should be serious or tongue-in-cheek. It alarmingly sways between either – one is not even sure whether some scenes have been intended as humour or not. One such moment is where Sven-Ole Thorsen succeeds in impregnating Marjorie Bransfield by planting a glowing hand on her chest, causing her to give birth in all of about two minutes. There is something hilariously funny to the scene, the sort that can guarantee Abraxas camp glory in the Golden Turkey Hall of Fame. Another piece of unfathomable bizarreness is the fight scene that comes accompanied by a jazz score. When the film does try to be funny – jokes about Jesse Ventura’s answer box’s “VD” – it only ends up being corny.

Canadian director Damian Lee previously directed the even worse Gnaw: Food of the Gods Part II (1989) and went onto the serial killer thriller Papertrail (1997), the action film Agent Red (2000), the thriller King of Sorrow (2006) and the serious dramatic The Poet (2007). Lee did however make the compulsively fascinating and indescribable InnerAction (1996). He has also produced a body of low-budget sf, horror and action films, including Spacerage: Breakout on Prison Planet (1985), Roger Corman’s Dean R. Koontz adaptation Watchers (1988) (which he also wrote), the quite good study in female juvenile delinquency Fun (1994), the action film The Killing Machine/The Killing Man (1994), Jungle Boy (1996), Specimen (1996), Spill/Acid Death/Virus (1996), and the psycho-sexual thrillers Jill the Ripper/Jill Rips/Tied (1999) and Mercy (2000).