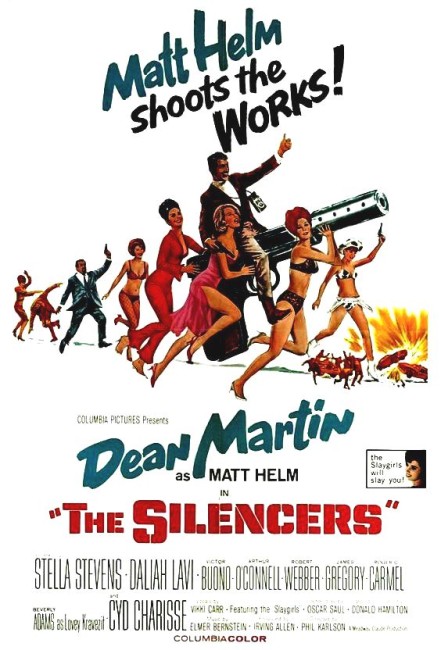 The terrorist organization The Big O are planning Operation Fallout – a scheme to steal US rockets and use them to flood the country with radioactive waste. MacDonald, the head of ICE (Intelligence Counter Espionage), wants top agent Matt Helm for an assignment. Helm insists on going to Acapulco for a Slaymate photo shoot instead. When assassins attempt to eliminate him, Helm is reluctantly drawn into stopping The Big O’s scheme.

The Silencers was the first of the Matt Helm films starring Dean Martin. The films were made as direct imitations of the James Bond films. They were taken from a series of popular spy thrillers written by Donald Hamilton. Hamilton’s series began with Death of a Citizen (1960) and has continued through 27 books, the last being published in 1993, before Hamilton’s death in 2006. The film adapts the first and fourth of Donald Hamilton’s books, Death of a Citizen (1960) and The Silencers (1962). Despite adapting the two books, the film throws the plots of both out anyway and comes up with a villain’s world domination scheme borrowed from the James Bond film Dr No (1962).

To say that The Silencers was the best of the Matt Helm may be to give a misleading impression that one is praising it. One isn’t – the Matt Helm series is infuriating in its obnoxiousness. Donald Hamilton’s books were written in a pugnacious cod-Mickey Spillane man’s man style but at least they took themselves seriously, often being criticised for their grim violence.

By contrast, the films don’t take anything seriously. They play upon an appallingly smug male fantasy – one certainly flamed by the James Bond films – of a suave playboy and endless female availability. The double entendres are atrocious: names like Lovey Kravezit or the opening dance number that features Cyd Charisse singing: “A gun can be a .22 or [accompanied by a squeeze of her breasts] a .38.”

However, in casting Dean Martin in the role of Helm, the Bond playboy image has become more that of a tipsy lounge lizard and the role crafted around allowing Martin to play the leering lush. There is not the slightest degree of believability to the role – in any real secret service agency, Helm would be the world’s most incompetent agent – at one point here, the agency head comes to him requesting he take an assignment and Helm tells him to get lost so that he can go and conduct a model shoot.

The Silencers is the best of the Matt Helm series in that it plays itself moderately in the direction of being a James Bond film. In the subsequent films, the series blew up the male fantasy element and double entendres, while Dean Martin overplayed to the point of making the films excruciatingly unwatchable.

As a James Bond-type film, The Silencers certainly fails in all crucial regards. It is a cut-price Bond film. The climax with Dean Martin fending off a laser strives to be a big Bond climax but falls woefully short. Victor Buono is set up as a copy of Dr No but the film hardly even uses him with Buono only appearing in about four scenes throughout. The middle of the film gets completely sidetracked once Stella Stevens enters the scene, whereupon the plot jumps tracks to turn into an odd couple comedy. She has a humiliating role that requires her to stumble over her feet every second moment but plays well – her scene getting drunk is rather funny.

The subsequent Matt Helm films were:– Murderers Row (1966), The Ambushers (1967) and The Wrecking Crew (1969). The character later became the basis of a short-lived tv series Matt Helm (1975-6) starring Anthony Franciosca. This played itself seriously but only lasted for thirteen episodes. In 2006, the idea of a presumably serious big screen Matt Helm revival was touted. The Silencers should not be mistaken for the alien invasion/conspiracy/action film The Silencers (1996).

The video release for the film is amusing in that it announces “From the producer of The Poseidon Adventure [1972]”, mistaking this film’s producer Irving Allen for disaster film maker Irwin Allen of The Swarm (1978) fame.