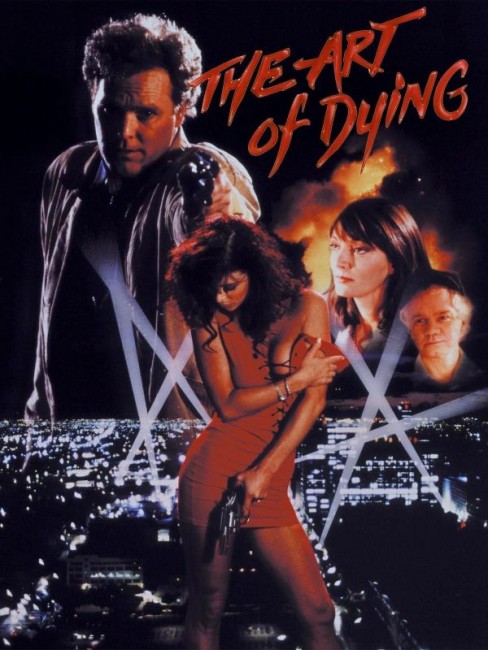 LAPD detective Jack is upset when a young teenage runaway he has tried to help is found murdered. His investigation puts him onto the trail of film director Rosco Went who is recruiting aspiring actors and actresses and getting them to enact death scenes for his magnum opus ‘The Art of Dying’ before killing them on camera. With Jack on his tail, Rosco then targets and abducts Jack’s mystery lover Holly where he intends to use her to re-enact the death of Joan of Arc, the part she played in a high-school stage production, this time for real.

The idea behind The Art of Dying – of a filmmaker preying upon young teenage runaways come to Hollywood, turning them into victims in snuff movies – is a good one. It is an idea particularly well suited to an exploitation film like this in that it comes uneasily close to certain truths – the way that exploitation cinema, not unlike the filmmaker in the story, recruits aspiring actresses hoping to break into the big time and gets them to take their clothes off with great regularity.

Sadly, this is an idea that lacks a satisfying treatment (in this film at least). The story drags. The film never goes anywhere – most of the middle, at least half-an-hour of it, consists of nothing happening except various killings interspersed with scenes of Wings Hauser and girlfriend Kathleen Kinmont having sex. (In one tacky scene, Hauser as director intercuts scenes of he and Kathleen Kinmont in a steamy embrace with one victim being stabbed where Kinmont’s mounting orgasm is crosscut with the killer’s frenzied stabbing).

Detective Hauser’s pursuit of the killer is very vaguely developed. In the film’s most ridiculous part, all of the detective work in the film is done by police department psychologist Michael J. Pollard. Although the most incredible thing that the film asks us is to believe that Michael J. Pollard, in a ridiculously bugged-out performance, is a psychologist at all. It is a disappointing and uninteresting film.

The Art of Dying features actor Wings Hauser in the director’s chair. Hauser is frequently cast in action films as psychotic, usually Southern sheriff, villains. This was one of a handful of films of no particular distinction that Wings Hauser also directed, the others being Coldfire (1990), Living to Die (1990) and Skins (1994). The Art of Dying was produced, written and photographed by Richard Pepin and Joseph Mehri who have gone on together to direct/produce a number of sf/action hybrids such as Cyber Tracker (1994), The Silencers (1996), The Sender (1997).