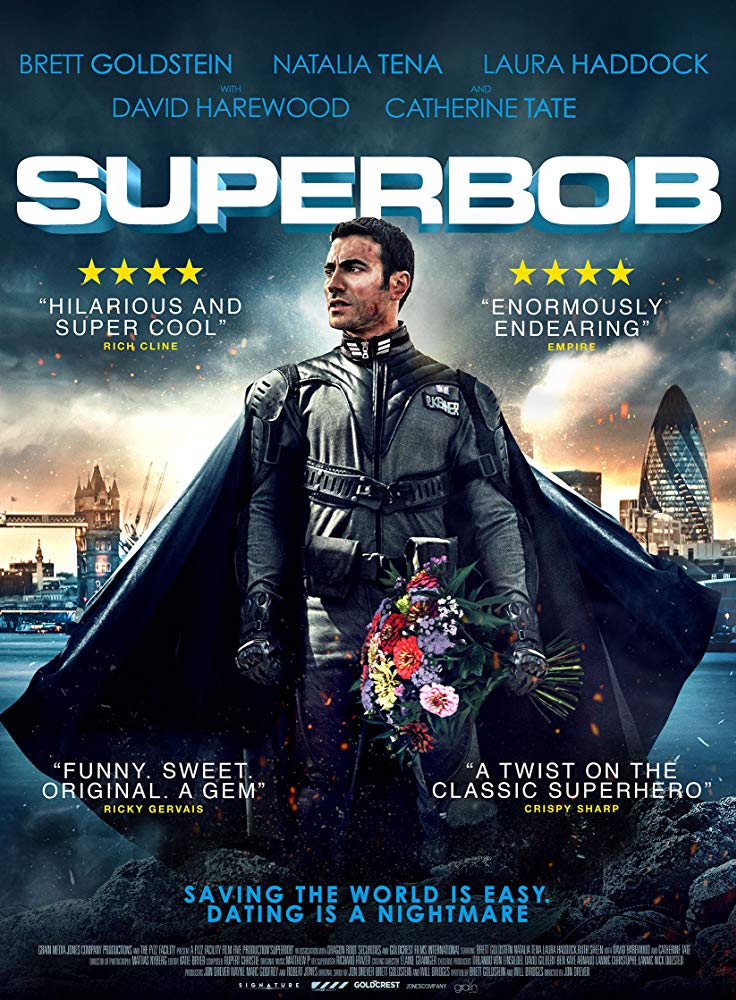 Six years ago, Bob Kenner, a postman from the London suburb of Peckham, was struck by a meteorite. As a result, he has gained superpowers, including invulnerability to damage, the ability to fly and super-strength. Co-opted by the British Government, he has become a superhero in their employ, popularly known as Superbob. This does mean a good deal of paperwork to be filled out every time he goes into action. A film crew come to profile Bob as he goes out on a date for the first time in six years with June, a local librarian. Bob’s cleaner, the vivacious Colombian girl Doris, tries to prepare him for his date. However, Theresa, Bob’s superior at the Ministry of Defence, wants him to come in on his official day off for a handshake with an American senator who has been rankling that Bob is not theirs and accuses the government that he is an out of control weapon. Unhappy at having to do so, Bob walks out on the meeting, sparking an international incident. While visiting his mother, Bob lies and says he is involved with Doris in order to make his mother happy. However, during the course of the pretence he is then forced to make, Bob discovers that he really does have feelings for Doris.

The British superhero is not exactly a thriving phenomenon. I am unable to recall any British superhero films prior to this. Strangely enough, 2015 did see two entries, both mockumentaries with film crews following an ordinary man with powers about with Superbob here and Nick Love’s American Hero (2015), while there was also the non-mockumentary iBoy (2017) not long after. Even on the comic-book page, the British superhero is a rarity – all that comes to mind is Captain Britain, who was popular in the pages of 2000 A.D.. The irony of this is that despite the lack of British-made superheroes, some of the most influential names in American comic-books – Alan Moore, Neil Gaiman, Grant Morrison, Mark Millar and Brian Bolland – hail from the UK.

Superbob is the creation of Brett Goldstein. Goldstein started out in stand-up comedy and has made a number of appearances in various comedy shows and straight dramatic roles on film and tv. He also wrote the non-comedy film Wish You Were Here (2005). Goldstein had previously teamed with director Jon Drever, a classmate from school, and they premiered the character of Bob in the four-minute short film Superbob (2009).

The superhero parody has had a more than reasonable life on film and tv ranging from The Return of Captain Invincible (1983) to The Tick (1994-6) and the popular hit of The Incredibles (2004). In recent years, the superhero parody has taken the form of a deflation in a series of films about superheroes that have no powers such as Defendor (2009), Griff the Invisible (2010), Kick-Ass (2010) and Super (2010).

Superbob wrings some amusement out of the superhero parody. Jon Drever adopts a mockumentary approach and the show is told through the eyes of a film crew following Bob (although it is a soft mockumentary and we are supposed to forget there is a camera crew there at various points like during the romantic scenes where the couple improbably allow a camera crew to get into closeup). Bob has the standard range of powers not too different from Superman but is someone who everybody around regards as an ineffectual muddler.

The early scenes of the film are particularly good at getting the uncomfortable twittishness of Bob’s efforts to do right down – there is a side-splittingly funny scene where he is asked to give a speech for a geriatric couple who are having their fiftieth wedding anniversary and starts rambling on about how it is a good thing they are near to death and keeps digging himself into an even more embarrassing hole with everything he says. Goldstein and the entire cast have a marvellous way with deadpan understatement and you have to be constantly watching around the edges of what is happening to get all the humour in the film.

Much of the humour also deals with the British obsession with (and resistance to) bureaucracy and paperwork. It is very British humour – this is a film that would never have been made in America, or if it was, the humour would all have been played broadly and obviously to make sure that everybody got every punchline.

In the latter half of the show, the everyday mockumentary aspect gives way to a dramatic structure of sorts and becomes far less interesting – there are even times the film seems to be taking its romantic element seriously and is emotionally rooting for the characters to get together. The film sets up some very predictable story arcs – in the incident with the Americans, and especially that Brett Goldstein is going to realise that Laura Haddock is not the right person for him and rush into the arms of Natalia Tena. That said, it does a very likeable job of delivering either. In particular, these scenes gain a great deal from the vivacious and sparkling presence of Natalia Tena, who I did not recognise until afterwards as the wildling Osha from tv’s Game of Thrones (2011-9).