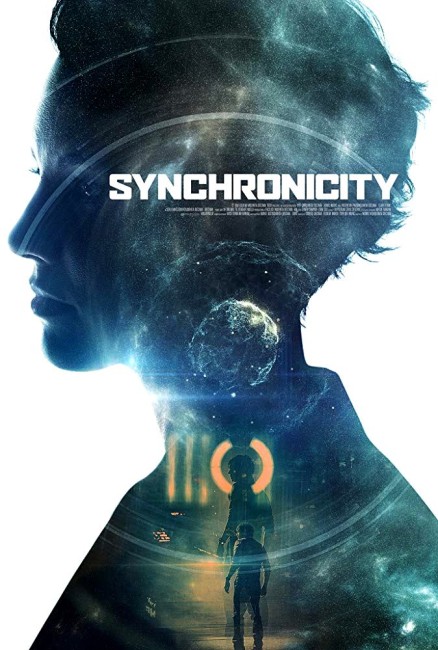 Jim Beale heads an ambitious research project to create a wormhole through time. The project undergoes its first trial and the wormhole is successfully opened, after which they find a dahlia specimen has been sent back from the other end of the wormhole. However, they have used up their supplies of the rare substance needed to power the process. The only option for Jim to complete the experiment – ie. send the dahlia back from a few weeks in the future and prove it works – is to ask for money from the venture capitalist Klaus Meisner. As he is due to meet Meisner, Jim is joined by the beautiful Abby who passionately argues his case. Meisner provides the funding but then backstabs Jim by revealing that he owns the dahlia and will refuse to release it unless he gets ownership of the company. As he is passionately drawn to Abby, Jim realises that she is Meisner’s puppet. As the process is reactivated to send the dahlia back, Jim impulsively jumps through the wormhole and back in time. As he sets out to stop Meisner taking control, Jim finds he is doomed to repeat the events that have already happened. In his attraction to Abby, he discovers that things are very different to what he believed.

Synchronicity is a venture into the time paradox theme. The story that people are probably most familiar with here is Twelve Monkeys (1995) in which a time traveller seeking to prevent a disastrous future from occurring ends up inadvertently causing the very same future to occur by lapping over and intersecting with his own past. You could also point to Back to the Future Part II (1989), which tells a new story hidden inside the margins of a previous chapter.

However, the work that Synchronicity most resembles is Nacho Vigalondo’s Timecrimes (2007) and the Australian The Infinite Man (2014). Gentry mimics the structure of Timecrimes, and to a slighty lesser extent The Infinite Man, first telling one narrative about a man and an experiment then taking him back in time to intersect with the prior events we have just seen and explaining some of the odd anomalies before we he travels back a third time to deal with the problems that occurred when he went through the first time. In Twelve Monkeys, Timecrimes, The Infinite Man and Synchronicity, the past is fixed and one’s entry into it is more like slotting together pieces in a three-dimensional jigsaw. There were a number of other time paradox films that came out around this same time with Predestination (2014), Counter Clockwise (2016), Paradox (2016) and Black Hollow Cage (2017)..

This is played with an undeniable cleverness on the part of Jacob Gentry and his cast as we see aspects and random incidents occurring in the margins of the first narrative suddenly lapping over and gaining a whole other meaning or significance. There is a fascination to watching this play out, even if one feels that the story threads start to get lost in each other in the last twenty minutes. For instance, we seem to go from Chad McKnight preparing to go through the wormhole a third time to his somehow having gone back prior to the start of the experiment and influencing events there. The film also creates confusion by mingling what is a straightforward time travel story with parallel worlds theory, suggesting that people aren’t travelling through time but to different timelines. The film works well though, even if it doesn’t quite sit up there with the ingeniousness of Twelve Monkeys or Timecrimes.

Jacob Gentry creates an interesting visual scheme. Clearly he is operating on only a moderate budget, nevertheless crafts the city exteriors with a quasi-futuristic look – all Blade Runner (1982) neo-noir. The vistas of the city we get seem very much fashioned after those in Ridley Scott’s film, while the score has been intended with a deliberate electronic feel that resembles Vangelis’s soundtrack for that film.