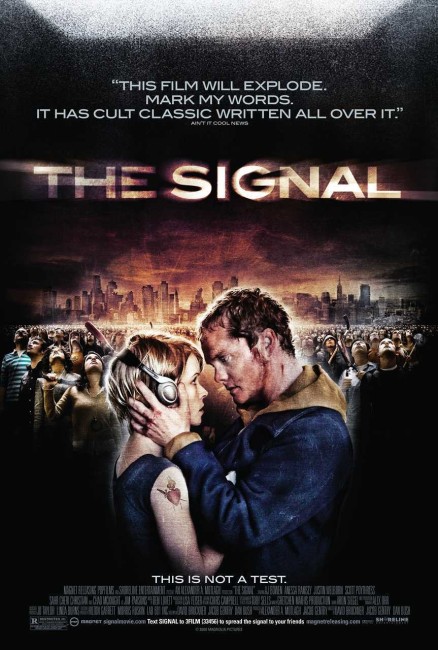 Maya is having an affair with Ben. He begs her to meet him at Terminus bus station and come away with him but instead she returns home to her husband Lewis. Lewis is arguing with two of his friends and, as she watches, Lewis suddenly beats one of them to death with a baseball bat. She flees to a neighbour’s apartment but everyone in the building has gone crazy and is trying to kill each other. She realizes that the madness is being caused by strange signals that are coming through all televisions, radios and telephones. In the morning, she flees with Lewis’s surviving friend Rod but he too becomes affected by the madness. After the car crashes, she walks away, intending to head to Terminus Station. Meanwhile, Lewis bursts into the home of Anna who was preparing for a New Year’s dinner party and has just killed her husband Ken as he became infected by the signal and attempted to strangle her. Anna has taken shelter with her friend Clark but Lewis’s signal-induced delusions make him certain that she is Maya. As various others try to seek shelter in the apartment, no one can be sure who inside or outside is infected by the signal madness.

The Signal is a debut horror feature from David Bruckner, Dan Bush and Jacob Gentry, three novice filmmakers from Atlanta, Georgia. The Signal was made in an unusual way. Bruckner, Bush and Gentry wrote the story between them. In any other circumstance, this could easily have served as a straightforward script handled by a single director. Instead, the three broke the story up into three parts – labelled Transmission I, Transmission II and Transmission III – and each directs one of these segments apiece. Although, rather than an anthology of different stories, The Signal comes together as something akin to Pulp Fiction (1994) – a non-linear and elliptical work where the story often zips back and forward in time to take up the points-of-view of different characters throughout. (The degree of continuity that we get between the three episodes is remarkable considering that they each come from different hands).

In premise, The Signal is astonishingly simple. Bruckner, Bush and Gentry have taken a leaf from films like Impulse (1984), Warning Sign (1985), George Romero’s The Crazies (1973) and, in particular, the James Herbert novel The Fog (1975), which concern a catastrophic outbreak of mass insanity. Indeed, there was a minor spate of mass insanity outbreak films over the next couple of years with Pontypool (2008), Dead Air (2009), Nine Miles Down (2009), the remake of The Crazies (2010), YellowBrickRoad (2010), Patient Zero (2012), Urge (2016), Mayhem (2017) and Mom & Dad (2017). (The Signal is so simple in terms of its premise that the film plunges us into the midst of its outbreak of mass insanity with no explanation ever offered as to the cause of the signal).

As with any anthology, particularly one where the individual segments come from different hands, the episodes are different in tone. David Bruckner’s introductory segment, Transmission I: Crazy in Love, is the most sober and serious of the three. Bruckner follows Maya (Anessa Ramsey) as she leaves her lover Ben (Justin Welborn) and returns home to her husband Lewis (A.J. Bowen) just as the insanity breaks out and he beats one of his friends to death with a baseball bat. The insanity starts to break out around her in the apartment block and she makes an escape the following morning with Lewis’s friend Rod (Sahr Nguajah).

This episode is straightforward and lacks any of the deadpan black comedy of the subsequent two. David Bruckner concentrates on the abrupt overturning of the familiar – husband A.J. Bowen who becomes increasingly aggressive in his interrogation of Anessa Ramsey and where she has been, before he turns on his friend, yelling at about it being his house and in the next second whacks him with a baseball bat. With her escape into the apartment hallway, we are granted a vision of the sudden eruption of madness – a man approaches a fleeing woman and cuts her throat with a pair of garden shears before Anessa Ramsey is rescued by her friend (Suehyla El-Attar) whose embrace suddenly becomes one that is trying to throttle her. And there is the morning after escape with Sahr Nguajah where he is suddenly shot by a uniformed woman in the street and then, after turning the car radio on, he abruptly turns and starts hitting Anessa Ramsey in the face with his fist.

Crazy in Love acts like an introduction to the nightmare but Jacob Gentry’s Transmission II: The Jealousy Monster escalates it to something positively hysterical. You can tell from the moment the episode opens on Cheri Christian sitting at a dinner table talking to her husband about the dinner party before Gentry’s camera switches around to show it is the husband’s dead body sitting at the other end of the table. Gentry keeps putting the episode through increasingly more absurd spins as they are joined by various others, including neighbour Clark (Scott Poythress), A.J. Bowen’s Lewis from the first episode who has come searching for Maya, and party guest Jim Parsons (Chad McKnight). Jacob Gentry’s take becomes progressively more blackly absurd with each turn the plot takes.

The episode’s focus is constantly shifting with us thinking one person is sane, only for them to start acting crazy the next minute. The deadpan dialogue that goes on as the group debate about whether to kill people knocking at the door; Chad McKnight’s straight-faced monologues about finding some pussy and having to kiss a dog at the last party; or when A.J. Bowen finds Cheri Christian and Scott Poythress dancing and she insisting that Poythress is her dead husband (whose body lies only a few feet away) are utterly hysterical. Some of the point-of-view shots where A.J. Bowen thinks that Cheri Christian is Maya or that Chad McKnight is the murdered Justin Welborn are very cleverly achieved.

Dan Bush’s third and final episode, Transmission III: Escape from Terminus, wraps up the story, taking the point-of-view of Ben who, joined by a now crazed Clark, goes to Terminal 13 at Terminus station to find Maya, followed by a maddened Lewis, who is determined to get her back. Escape from Terminus follows the same blackly hysteric tone of The Jealousy Monster, although is not as effective. The episode does however offer up the film’s single most demented moment – where Scott Poythress announces that he can electrically stimulate life back into Sahr Nguajah’s severed head and then proceeds to have a conversation with the decapitated head, which even demands a cigarette from him. Scott Poythress gives a rather funny performance while under the influence of the signal.

David Bruckner, Dan Bush and Jacob Gentry have each subsequently gone their own way. Dan Bush next worked on another multi-director film, the non-genre Fight Fuck Pray (2008), before going solo with the science-fiction film The Resurrection of William Zero (2014), the horror film The Vault (2017) and the psychic powers film The Dark Red (2018). Jacob Gentry subsequently directed three other psycho films My Super Psycho Sweet 16 (2009), My Super Psycho Sweet 16 Part 2 (2010) and My Super Psycho Sweet 16 Part 3 (2012) and the time paradox film Synchronicity (2015). David Bruckner made a return with episodes of the horror anthologies V/H/S (2012) and Southbound (2015) and the full-length The Ritual (2017) and The Night House (2020).