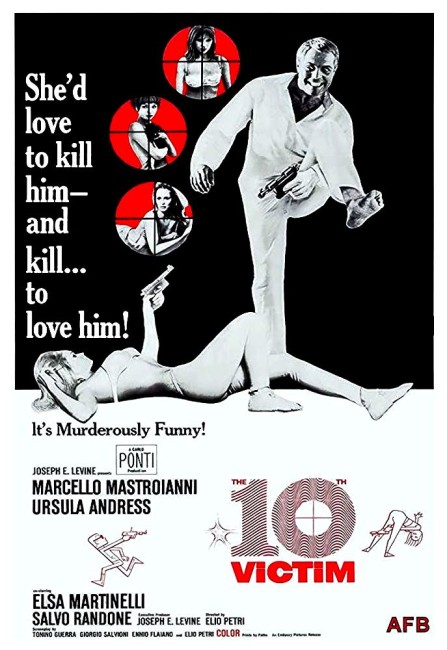 In the 21st Century, a form of legalised killing known as The Big Hunt has been introduced. Contestants alternate as either Hunters or Victims with the winner of the round being the one that kills the other. The survivors of each hunt win vast financial rewards if they can rack up ten kills. As one round reaches its climax, Caroline Meredith is paired against Marcello Polletti, although he does not know who his Hunter is. Both sell the outcome of their particular game as a tv commercial and try to maneuver the other into position in Rome for the coup de grace, only to realise during the course of such that they are falling for each another.

This Italian science-fiction film is an interesting pop artifact. It is an adaptation of Robert Sheckley’s novella The Seventh Victim (1953) – three victims presumably having been added to the title so as not to be confused with the Val Lewton witchcraft thriller The Seventh Victim (1943).

The story in the film, which concentrates on Marcello Mastroianni’s various money and women problems and Ursula Andress’s pursuit of him and her absurdly straight-face reasons for trying to get him to the Temple of Venus for the commercial, are not that interesting – and not at all helped by Mastroianni’s bored playing. It is only during the last quarter where one is not sure who is outmaneuvering who and who is falling in love with whom that the story gains any life.

While the story is not that interesting – and the two central characters certainly are not – The Tenth Victim remains watchable for its background. Its portrait of the satirical future society comes amusingly tongue-in-cheek. Ads promoting the Hunt go: “If you’re suicidal, the Hunt has a place for you. Why have Birth Control when you can have Death Control?” There is a deadpan drollness to some of the killings like the bra with built-in gun and explosive riding boots.

The film goes for a pop look in a way that only the 1960s could have – virtually all the sets and costumes are blinding white; a pair of sunglasses have been designed as a helmet that wraps around the entire head; mini-skirts come entirely backless or as ventilated strips; a tv set comes built into a wall and screens only the image of an eye blinking; and, for no apparent reason, a temple is empty but for two jazz musicians lying down and playing on black boxes.

The Tenth Victim is probably well overdue a remake – one could certainly see the premise going down well as a contemporary action film. The premise was borrowed as the basis of the fine reality tv show parody Series 7: The Contenders (2001) and later played seriously in the huge hit of the Young Adult film The Hunger Games (2012). (For more detail see Films About Human Bloodsports).

Other adaptations of Robert Sheckley’s works include the Disney superhero spoof Condorman (1981); the French The Prize of Peril (1983), which has very similar themes to The Tenth Victim in featuring a television gameshow where people are hunted for prize money; and the future body-snatching/time-travel film Freejack (1992). While not particularly well represented on the big screen, Robert Sheckley’s science-fiction has a witty sense of the absurd.