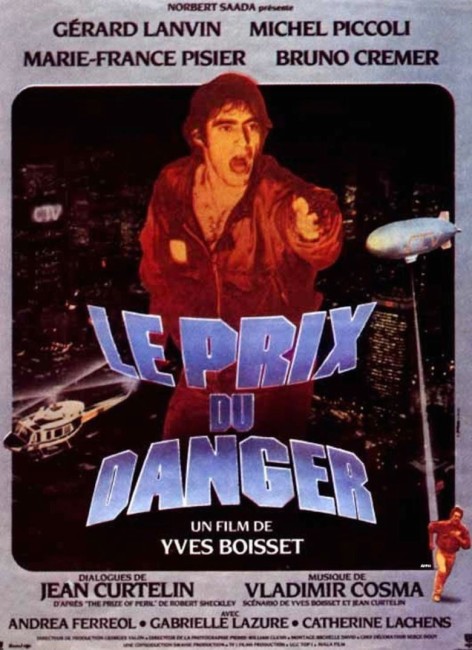 In the future, one of the top rating tv shows is ‘The Prize of Peril’ where unarmed contestants run for their lives against armed hunters who are trying to kill them, winning a one million dollar prize if they manage to stay alive. As the next ‘Prize of Peril’ broadcast is about to go into production under charismatic host Frederic Mallaire, a casting call goes out for contestants. The contestant eventually chosen is Francois Jacquemand. As the show gets underway broadcast live, Francois must run through Paris pursued by five chosen hunters. He has an unexpected degree of success and the network executives are surprised to find the audiences cheering him on. However, Francois soon discovers that ‘The Prize of Peril’ is rigged and that it is impossible for him to win – the only option is for him to break the rules of the game.

The Italian-made The Tenth Victim (1965), adapted from the short story The Seventh Victim (1953) by science-fiction writer Robert Sheckley, was the first film to offer up the concept of a tv show where people hunt and kill one another for sport. There had been the earlier, oft-remade The Most Dangerous Game (1932), which popularised the idea of a huntsman who enjoys pursing human game against victims who have to defend themselves with their bare hands, but The Tenth Victim was the first film to expand the idea into a satire on tv gameshows. Since then the idea of televised human hunting or gladiatorial bloodsports has become a theme revisited in a number of films, including the likes of Rollerball (1975), The Running Man (1987), Temmink: The Ultimate Fight (1998), Series 7: The Contenders (2001), The Condemned (2007), Death Race (2008), The Hunger Games (2012) and Turkey Shoot (2014).

Robert Sheckley had earlier visited the idea of the murderous tv gameshow in the short story The Prize of Peril (1958), which was twice adapted to film with the German tv movie Das Millionspiel/The Millions Game (1970) and the French-made La Prix du Danger/The Prize of Peril here. The interesting thing about The Prize of Peril is how much it seemed to have influenced the subsequent film version of The Running Man. Indeed, The Running Man seems to owe less to the Stephen King/Richard Bachman novel it is nominally based on than it does to The Prize of Peril from which it directly takes the idea of the charismatic gameshow host and the plot arc where the unarmed contestant begins to have unexpected success and becomes a popular hero championed by the audience, despite the fact that the outcome of the gameshow is rigged.

The Prize of Peril also digs far more into the sociological undertow of both The Running Man and Rollerball and the idea of serving up gladiatorial combat for the televised masses as a form of bread and circuses that holds back social unrest, which is here specified as six million unemployed. The Prize of Peril is also far more interested in debating the ethics of a human hunt than any of these others do. The film reaches a surprisingly downbeat ending in contrast to these others, which are usually set around the triumphant rise of the hero, whereas here a corrupt system pointedly carries on regardless as Gerard Lanvin is dragged away by an ambulance and taken to an asylum for rehabilitation after trying to expose on live television that the game is rigged.

The Prize of Peril was made at a time when the action film was in its relative infancy and it lacks the kinetic exhilaration of a modern action film, although does pick up considerably in the second half once the hunt begins. You cannot also help but contrast the film to the formula of gameshow presentation that set in with the advent of the reality tv show in the 00s. Reality tv likes to build up drama and suspense with heats with other contestants, elimination rounds and viewers being able to vote someone off but there is no such here – there is only a single contestant who is chosen before the program even airs. The film also rather incredulously has the action all being filmed by only a single cameraperson following the hunt from the back of a motorcycle.

There is an underlyingly black bite to the film at times – like the scene where Michel Piccoli’s host reacts to the scene of a man being electrocuted on a railway line “Let’s have that extraordinary shot again. Could you give us that shot in slow-motion?” There are also several satirical commercials aired during the show – an idea that was borrowed a few years later by RoboCop (1987) – with Michel Piccoli interrupting the broadcast to give promotion to vacation spots, motorcycles and munitions companies.

Other adaptations of Robert Sheckley’s works include the Disney superhero spoof Condorman (1981) and the future body-snatching/time-travel film Freejack (1992).