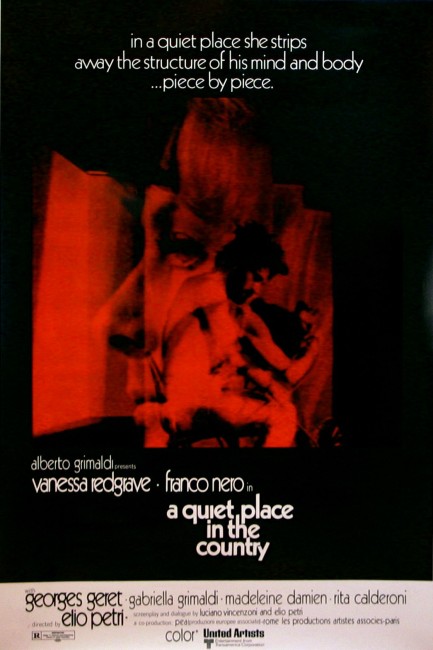 Leonardo Ferri is a successful artist living in Milan where his business affairs are managed by his girlfriend Flavia. Leonardo becomes frustrated living in the city and decides he wants to get away. He finds the perfect place in an abandoned villa in the countryside and arranges to rent it, moving in and transforming it into a studio space. There he becomes obsessed with Wanda Valier, a girl from an aristocratic family in Venice who lived there during World War II and reportedly slept with every man in the town, before she was killed by bullets from a British fighter plane. As Leonardo becomes more obsessed, the past and present begin to blur.

A Quiet Place in the Country is an interesting oddity. It is an almost Giallo film, although appears to have been made more as an arthouse work. Stars Franco Nero and Vanessa Redgrave were both big at the time and a couple in real-life, having met shortly before this during the filming of Camelot (1967). They stayed together on and off over the years, later marrying in 2006.

You are captivated by the film from its visually arresting opening scene (that seem to have almost nothing to do with the story that follows). It begins with Franco Nero tied to a chair in his studio wearing only a diaper as Vanessa Redgrave erotically teases him. The studio is outfitted with white vinyl couches and stairs that make contrasting black-and-white zigzag patterns. The scene comes with a strangle modernist focus, including a miniature toy car buzzing around and a tv set on facing the camera in the foreground. The action moves into the shower and bath where Nero is joined by Vanessa Redgrave who then stabs him, all before he wakes up and this turns out to be a dream.

This kind of visual intrigue continues in the next scenes with Vanessa Redgrave walking through the streets of Milan accompanied by men holding garlands of flowers, all as Franco Nero follows and then has a vision of Redgrave as a nurse pushing him in a wheelchair. This comes alongside scenes of Franco Nero back in his studio watching tv that offers a provocatively edited montage of clips that alternate between war footage and nudes. The villa comes in a beautiful state of decay, including statues overgrown in the grounds.

A Quiet Place in the Country is often pegged as a horror film. It is sort of. It feels like someone trying to make a giallo version of Repulsion (1965). There are also many similarties to Ingmar Bergman’s Hour of the Wolf (1968) that came out several months earlier in the year and similarly concerned itself with an artist’s subjectively-presented hallucinations, Elio Petri seems taken with the subjective viewpoint of Roman Polanski’s film and much of what happens here is clearly happening inside Franco Nero’s mind, although Petri never lets us entirely clear what is and isn’t. This does lead to some striking scenes where the scenes flip and change between present and narrated stories, where vehicles from the stories being told appear in the background, we see freedom fighters in the woods or Franco Nero turns up in the past.

On the other hand, the film never cleanly wraps things up. Franco Nero becomes obsessed with the girl in the villa in the past and we see some scenes where he interweaves with such. However, the way the film reaches a resolution where the past and present seem to blur is confusing – Franco Nero slips in and out of some kind of dream state where he is in bed with the dead girl (and even himself in one image), where the statues in the field are replaced by soldiers and peasants painting pictures, all before he is dragged away by police and medical staff, possibly having conducted a murder, and placed in an asylum.

Elio Petri was an Italian director who emerged during the 1960s and made several films. His most celebrated work was the crime thriller Investigation of a Citizen Above Suspicion (1970), which won the year’s Academy Award for Best Foreign Language Film. Petri’s one other genre film was the satirical SF film The Tenth Victim (1965) about a future where hunting people is made legal.