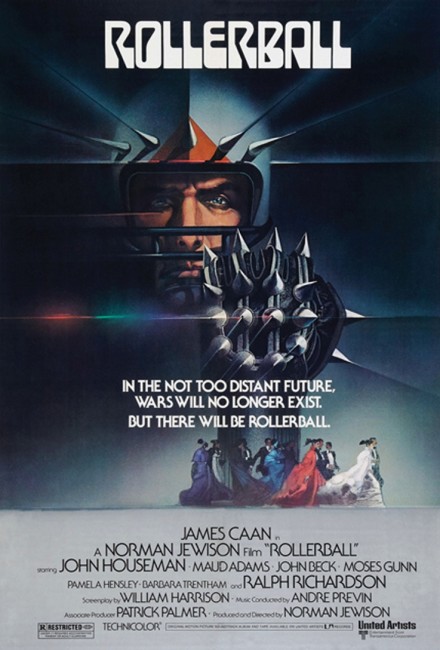 In the year 2018, all world problems have been quelled by the establishment of huge corporations that control resources. The masses are pacified and violence diverted by the ultra-violent spectacle of the game of Rollerball, a combination of pro-football, motocross rally and gladiatorial combat, in which players are frequently killed. One of the most successful players Jonathan E. has become a superstar with the Houston team. The corporations fear this idolatry and ask Jonathan to retire. He refuses and goes on a quest to discover why corporate decisions are made. His defiance provokes the corporation who place him in a game with no rules or time limit to dispose of him.

Rollerball was one of the few A-budget and few successful science-fiction films made prior to the big 1977 sf boom. Rollerball came from Norman Jewison, a director who had had success with films like In the Heat of the Night (1967), The Thomas Crown Affair (1968) and Jesus Christ Superstar (1973).

Norman Jewison and screenwriter William Harrison (an acclaimed short storyist) are clearly making a message movie with Rollerball. They signpost it and announce it for us to see in a heavy-handed way – they are taking to task violence in sports and making a message about the triumph of individualism. Rollerball was one of the first dystopian science-fiction films to rehearse the theme of the heroic individual triumphing against the mindless conformity of a totalitarian future.

The future seen here falls very much into the 1970s vision of the future as seen by the likes of 2001: A Space Odyssey (1968), The Andromeda Strain (1971), THX 1138 (1971) and Zardoz (1974) – where it had either become or was becoming such a place of technological perfection that humanity was in danger of being drowned in sterility. Here society has been made perfect (some nicely futuristic locations in Dallas) but there seems a sense of dissatisfaction. One of the film’s most potent images is the frighteningly decadent one where a group of bored partygoers detonate trees with a flare gun.

Of all 1970s dystopian futures, Rollerball‘s is the closest to actually having come true with its visions of a corporate elite ruling the world and cathartic ultra-violent sports being used to placate the masses – if you have any doubt about this, look at the popularity of the Superbowl and the WWF/WWE. (Although, contrary to what the film believes says, both of these obtain mass catharsis through the promotion of individuality, in treating players as superstars, rather than its suppression).

Frequently however, Norman Jewison and William Harrison mistake the depiction of sterility for an onscreen boredom. The film often becomes bogged down in solemn, stodgy dramatics. Although the film spends much time on the subject, we are never engaged in any of James Caan’s crises about reconciling with his wife or his team-mate in a coma. Where the film does have a visceral kick is contrarily in exactly what it is supposedly trying to condemn – the effectively brutalising nastiness and not-inconsiderable violence of the Rollerball game itself. We do become engaged in its kinesis and the brutality of its impact.

Most of the performances are bland. John Houseman plays with implacable dignity but the one who does add some brief colour in his few moments on screen is Ralph Richardson in an amusing performance as an eccentric librarian dealing with the irascible world’s central computer that keeps misplacing information: “There goes the 14th Century – ah well, only Dante and a few corrupt popes.”

The theme of gladiatorial sports as public spectacle of the future has become a resilient one since with the likes of The Prize of Peril (1983), The Running Man (1987), Temmink: The Ultimate Fight (1998), The Hunger Games (2012), Turkey Shoot (2014) and the tv movie Future Sport (1998). (A more detailed overview of the genre can be found here at Films About Human Bloodsports and Death Games). The same year as Rollerball, Roger Corman and director Paul Bartel made the amusing future sports satire Death Race 2000 (1975), which was designed as a quick low-budget cash-in on Rollerball but makes the same points with far less bombast.

The film was later remade as Rollerball (2002), which stripped all the message and struggle for individuality themes, indeed even its futuristic setting, and mounted it merely as an action film.

Norman Jewison later returned to the genre as producer of the fine revived caveman film Iceman (1984) and to direct the invisible companion children’s film Bogus (1996).