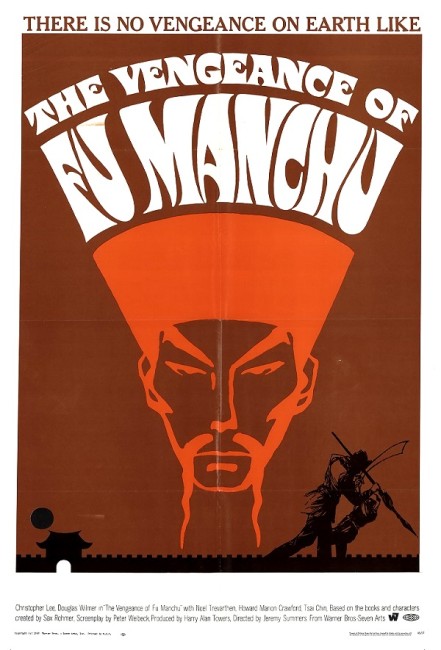 Fu Manchu abducts a missionary doctor and forces him to surgically turn one of Fu Manchu’s Dacoits into a double for Sir Dennis Nayland Smith. The double is substituted for Sir Dennis and, under hypnotic command, kills Sir Dennis’s maid. As ‘Sir Dennis’ is placed on trial and sentenced to be executed, England reels in shock. Fu Manchu makes plans to disrupt the world by substituting doubles for the police commissioners of other countries.

Two of the strengths throughout the series were Christopher Lee’s icily inscrutable performance, which was always finely balanced out by Tsai Chin as his dedicated-to-the-death daughter. The other was the fine period production values, marked here by a return to Ireland’s Kilmarnock jail, which added immeasurably to the look of the first film. All of these are up to scratch once again here but in most other regards, The Vengeance of Fu Manchu is a routine effort.

The plot lacks a real credibility – Fu Manchu’s far-fetched world domination plot this time around involves creating surgical doubles of the top police officials around the world, placing the doubles in trances and sending them to kill. In terms of plot, the film is all over the place – there seem long subplots that never go anywhere such as the one involving Moss’s girlfriend’s stint as a Shanghai nightclub singer, and a surfeit of characters.

The film also makes the mistake of trying to turn the hanging of the Nayland Smith double into suspense – while Dr Petrie does not know it is a double we do and it feels false when director Jeremy Summers tries to make us involved in the race against time to save ‘Nayland Smith’ because it does not matter to us whether the double is hung or not. The surgical techniques involved in the facial reconstruction are far too advanced for the film’s time period, least of all for a lone missionary operating amidst the Chinese peasantry.

Douglas Wilmer does the iron-willed moral imperative thing with typical stolidity as Nayland Smith. The film was West German financed and casts Germans as Americans with bizarrely unconvincing results.

Elsewhere, Fu Manchu was incarnated by Warner Oland in the early talkie era in three films, The Mysterious Dr Fu Manchu (1929), The Return of Fu Manchu (1930) and Daughter of the Dragon (1931). There was then the excellent The Mask of Fu Manchu (1932) with Boris Karloff in the title role. This was followed by a serial Drums of Fu Manchu (1940) starring Henry Brandon and a very cheaply made tv series The Adventures of Fu Manchu (1955) starring Glenn Gordon that lasted only thirteen episodes. The film were later subject to a comedy send-up by Peter Sellers in The Fiendish Plot of Dr Fu Manchu (1980)..