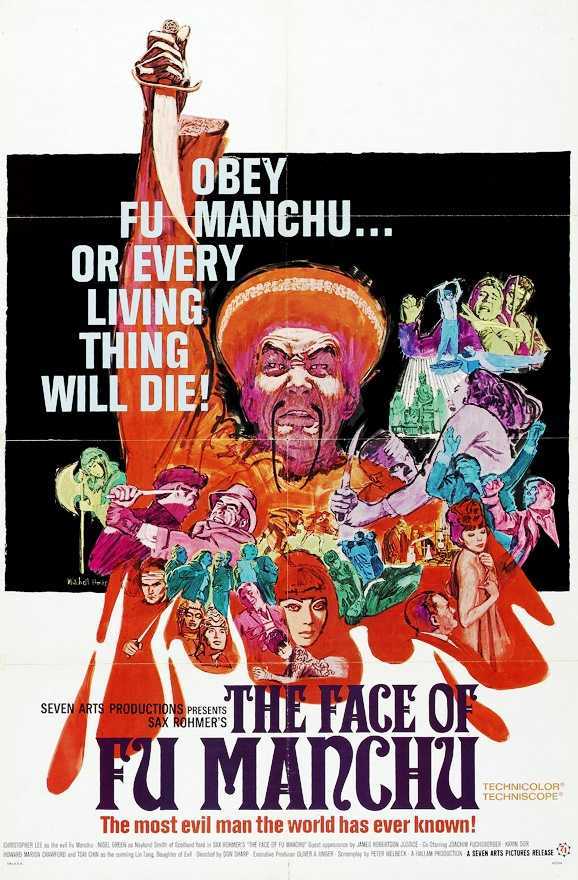 In British-ruled China at the turn of the 20th Century, Sir Dennis Nayland Smith oversees the capture and execution of the criminal mastermind Fu Manchu. Several years later, Sir Dennis is an assistant commissioner at Scotland Yard. Investigating the abduction of biochemist Professor Ernst Muller, Nayland Smith detects the hand of Fu Manchu’s loyal army of Dacoit assassins. Investigating further, Nayland Smith finds that Fu Manchu is indeed alive and well. Fu Manchu has abducted and hypnotized Muller to make him distil the deadly Tibetan Black Hill Poppy, which he is planning to unleash into The Thames unless Britain bows to his demands.

Fu Manchu was a creation of pulp writer Sax Rohmer, a pseudonym of the British journalist Arthur Henry Ward. Rohmer published thirteen Fu Manchu novels between 1913 and his death in 1959. Rohmer was probably inspired by the writings of M.P. Shiel but made these Yellow Peril stories his specialty, drawing upon jingoistic notions of the mysterious East, ruthless Chinese tongs and of course the prevalent racist fear of the era that the Chinese would come to racially dominate the world by sheer numbers. The Fu Manchu stories were extraordinarily popular and there were many imitators during the 1920s and 30s, even entire series of magazines featuring similar Asian super-villains.

Fu Manchu has appeared on screen a number of times – he was incarnated by Warner Oland in the early talkie era in three films, The Mysterious Dr Fu Manchu (1929), The Return of Fu Manchu (1930) and Daughter of the Dragon (1931). There was then the excellent The Mask of Fu Manchu (1932) with Boris Karloff, which achieved a particular height of adventure thrills, and this was followed by a serial Drums of Fu Manchu (1940) starring Henry Brandon and a very cheaply made tv series The Adventures of Fu Manchu (1955) starring Glenn Gordon that lasted only thirteen episodes. Most recently, the cycle was subject to a comedy send-up by Peter Sellers in The Fiendish Plot of Dr Fu Manchu (1980).

This surprisingly classy production was the first and best in a series of Fu Manchu films made by exploitation producer Harry Alan Towers and starring Christopher Lee. The Face of Fu Manchu is an interesting attempt to straddle both the Anglo-Horror cycle created by Hammer Films, from which Harry Alan Towers employs Hammer’s star player Christopher Lee, and the then rage for James Bond films. [Which is somewhat ironic considering that Ian Fleming fairly much borrowed the Fu Manchu character when he created the title character in Dr No (1962)]. The approach does not entirely jell – the Anglo-Horror element is sometimes deliberately bent out of shape to include the staple car chases and fisticuffs of the Bond films. It also results in the inclusion of often jarringly anachronistic gadgetry like directional mikes and radio headsets amid the clearly Edwardian period setting.

In other regards, The Face of Fu Manchu cannot be faulted. It was the finest film from Don Sharp, usually a director who rarely rose above the hack end of the Anglo-Horror cycle. (See below for Don Sharp’s other films). Sharp’s nicely clipped direction keeps the film swiftly moving. The opening beheading of Christopher Lee is a particularly strong lead-in.

There is at least one memorable sequence – the haunting moment where the hypnotised scientist Harry Brogan, previously a character played for a certain buffoonery, complains he is tired whereupon Christopher Lee hands him a dagger. The array of ermines, silks and robes in pinks, purples and canary yellows are eye-catchingly gorgeous, all the more so in being placed up against the formidably grim location work at Dublin’s disused Kilmainham jail.

Christopher Lee gives a solid performance as Fu Manchu, although it is noticeably only Lee in an epicanthic makeup job and drooping mustache and is otherwise the same familiar Lee dark presence and clipped delivery. He gets a most wonderful foil in the casting of Nigel Green as Sir Dennis, who plays with a wonderfully steely, dignified determination and a sense of moral reproach that accompanies him like a halo. The part was recast in the next two films with Douglas Wilmer who had a stolidity, entirely lacking in the presence that Green brings here.

The other Fu Manchu films from Harry Alan Towers with Christopher Lee were The Brides of Fu Manchu (1966), The Vengeance of Fu Manchu (1967), The Blood of Fu Manchu/Kiss and Kill (1968) and The Castle of Fu Manchu (1969). The first two sequels are passable but for the last two Towers collaborated with exploitation director Jesus Franco with cheap and dreary results. Producer Towers also made two further Sax Rohmer adaptations with The Million Eyes of Sumuru (1967) and The Girl from Rio (1969) about a female super-villain.

Don Sharp’s other genre films are:- the Hammer vampire film Kiss of the Vampire (1962), Witchcraft (1964), Curse of the Fly (1965), The Brides of Fu Manchu (1966), the Hammer historical horror Rasputin The Mad Monk (1966), the period sf comedy Jules Verne’s Rocket to the Moon/Those Fantastic Flying Fools/Blast Off (1967), the psycho-thriller Dark Places (1973), the undead biker film Psychomania (1973) and the lost world film Secrets of the Phantom Caverns/What Waits Below (1984).